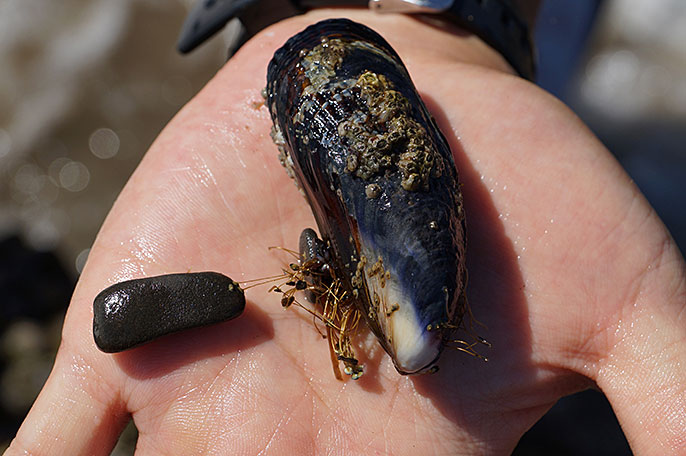 A mussel uses its filamentous byssal threads to adhere to wet surfaces.

A surfboard that seals its own cracks without having to cure in the sun for days. Underwater structures that can be fixed with less work and downtime. Joints that are almost instantly stronger after surgery. Sounds like science fiction, but thanks to researchers at UC Santa Barbara, it’s coming closer to reality.

“Since the late 1990s, there have been many papers that concentrate on self-healing polymers under dry conditions,” said Kollbe Ahn, a researcher at UC Santa Barbara's Marine Science Institute and a lead author of a letter published in Nature Materials. “What we wanted was to study a polymer that could heal under moist conditions, or underwater.”

The underwater self-healing property is inspired by mussels, whose ability to cling to rocks even under the most turbulent and watery conditions caught the attention of Ahn and Herbert Waite, professor in the Department of Molecular, Cellular and Developmental Biology.

“Much of the time, the presence of water limits the ability of an adhesive to stay tacky,” said Waite, “so even polymers that can self-heal under dry conditions are frustrated from doing so underwater.” However, a protein secreted by mussels has the ability to penetrate that superficial liquid layer and adhere to the underlying surface, he said.

“In that particular protein, the percentage of catechol groups is high: up to a third of all residues,” Waite said. Catechol is an organic compound that occurs widely throughout nature; however, its occurrence in proteins is nevertheless rare, according to Waite. Given that, the 30 percent detected in that protein secreted by mussels was something of a “smoking gun,” he said.

Taking the catechol cue, Ahn and Waite, in collaboration with researchers at the UCSB Department of Chemical Engineering, prepared water-insoluble polymer rods of varying rigidities decorated with mussel-inspired synthetic catechols. They cut the rods, soaked the ends in buffer solutions of varying acidities, and rejoined them under light pressure. The ends adhered with varying strengths, in some cases resisting re-breakage in the contact area.

“The rods broke in other areas after we joined them together and pulled them apart again,” said Dong-Woog Lee, co-lead author of the letter and a postdoctoral researcher in the Chemical Engineering department’s Interfacial Sciences Lab, where the adhesion measurements between the polymers and catechols groups were conducted. To measure the adhesion forces between polymer surfaces, they used the Surface Forces Apparatus, a device developed by UCSB chemical engineering professor Jacob Israelachvili. It can measure interaction forces between surfaces, down to the molecular scale.

Their conclusions? That catechols were indeed essential in the ability of the polymers to self-heal in aqueous conditions. The surfaces in wet conditions do acquire an aqueous layer that would interfere with most adhesives, according to Israelachvili, but the intermolecular hydrogen bonds between catechols could overcome that layer and initiate the self-healing.

“Those groups actually prefer to bind to each other even more strongly,” said Israelachvili, who also is a professor of materials at UCSB.

Acidity was also a factor, as lower-pH (acidic) solutions exposed these catechols on the polymer surface, while higher-pH (alkaline) conditions blocked the action of the catechols. To lesser extents, pressure and the rigidity of the polymers also affected the polymer rods’ ability to rejoin themselves.

These findings could result in a wide variety of applications, from industrial to medical. Under the right conditions, materials regularly exposed to water, such as piers and boat hulls, can be repaired with less effort and time. Self-healing surfaces in wet environments, such as some industrial manufacturing components, could be replaced less often. Implants that undergo large amounts of wear and tear, such as hip and knee replacements, would require less, if any, surgery to maintain. Even brittle bones with hairline cracks could be reinforced with the appropriate self-healing polymer.

The synthetic polymers would be less difficult and more cost-effective to synthesize, said the researchers, as opposed to proteins they could extract from mussels and other marine organisms. They are actively exploring the potential of these findings.