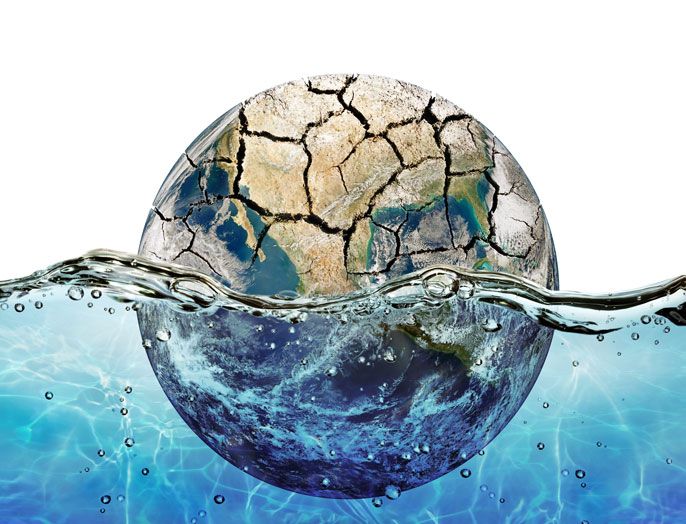 A new way to recover fresh water from brine developed by researchers at UC Riverside will help alleviate water shortages in arid regions.

Engineers at the University of California, Riverside have developed a new way to recover almost 100 percent of the water from highly concentrated salt solutions. The system will alleviate water shortages in arid regions and reduce concerns surrounding high salinity brine disposal, such as hydraulic fracturing waste.

The research, which involves the development of a carbon nanotube-based heating element that will vastly improve the recovery of fresh water during membrane distillation processes, was published in the journal Nature Nanotechnology. David Jassby, an assistant professor of chemical and environmental engineering in UC Riverside’s Bourns College of Engineering, led the project.

While reverse osmosis is the most common method of removing salt from seawater, wastewater, and brackish water, it is not capable of treating highly concentrated salt solutions. Such solutions, called brines, are generated in massive amounts during reverse osmosis (as waste products) and hydraulic fracturing (as produced water), and must be disposed of properly to avoid environmental damage. In the case of hydraulic fracturing, produced water is often disposed of underground in injection wells, but some studies suggest this practice may result in an increase in local earthquakes.

One way to treat brine is membrane distillation, a thermal desalination technology in which heat drives water vapor across a membrane, allowing further water recovery while the salt stays behind. However, hot brines are highly corrosive, making the heat exchangers and other system elements expensive in traditional membrane distillation systems. Furthermore, because the process relies on the heat capacity of water, single pass recoveries are quite low (less than 10 percent), leading to complicated heat management requirements.

“In an ideal scenario, thermal desalination would allow the recovery of all the water from brine, leaving behind a tiny amount of a solid, crystalline salt that could be used or disposed of,” Jassby said. “Unfortunately, current membrane distillation processes rely on a constant feed of hot brine over the membrane, which limits water recovery across the membrane to about 6 percent.”

To improve on this, the researchers developed a self-heating carbon nanotube-based membrane that only heats the brine at the membrane surface. The new system reduced the heat needed in the process and increased the yield of recovered water to close to 100 percent.

In addition to the significantly improved desalination performance, the team also investigated how the application of alternating currents to the membrane heating element could prevent degradation of the carbon nanotubes in the saline environment. Specifically, a threshold frequency was identified where electrochemical oxidation of the nanotubes was prevented, allowing the nanotube films to be operated for significant lengths of time with no reduction in performance. The insights provided by this work will allow carbon nanotube-based heating elements to be used in other applications where electrochemical stability of the nanotubes is a concern.

In addition to Jassby, contributors include Alexander Dudchenko, the first author on the paper and a former graduate student in Jassby’s lab who earned his Ph.D. in 2016; and undergraduate students Chuxiao Chen, Alexis Cardenas and Julianne Rolf.

The paper is titled “Frequency dependent stability of CNT Joule heaters in ionizable environments and their use in membrane distillation.” The work was supported by grants from the Office of Naval Research, Department of Energy, the National Science Foundation and the Petroleum Research Fund.