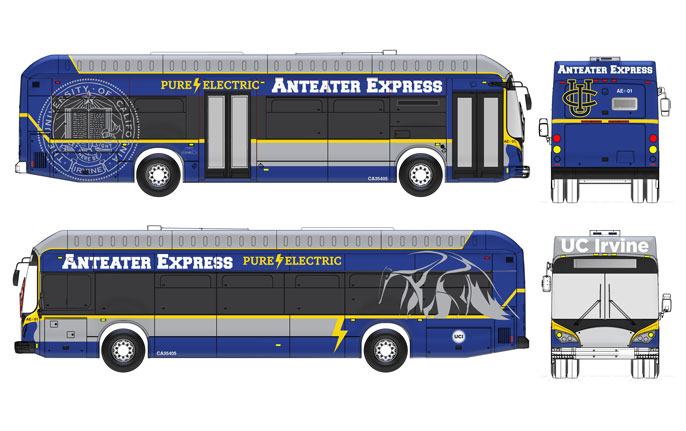 The 20 electric buses being built by BYD will feature UC Irvine colors and emblems.

The University of California, Irvine is poised to be the first college campus in the nation to convert its buses to an all-electric fleet. The student-funded and -operated Anteater Express shuttle service is acquiring 20 buses from BYD (Build Your Dreams) for $15 million.

The vehicles are being built at the company’s Lancaster plant to roll onto campus for the 2017-18 academic year, joining a hydrogen electric bus to provide more than 2 million pollution-free rides annually. Undergraduates voted to pay up to $40 per quarter to the Associated Students of UC Irvine to cover the bus purchase and other costs. Individual rides are free.

“Once again, UC Irvine is No. 1 in making sure we have a sustainable future,” said ASUCI President Tracy La. The campus has twice been voted the Sierra Club’s “Coolest School,” among other environmental awards. La, like many of her classmates, has relied heavily on the buses to get between classes and her job. “I hope the rest of the country can follow us,” she said. “I hope other colleges and universities will do this.”

While other schools have added some alternative energy transportation in recent years, UC Irvine is the first to completely scrap its traditional diesel fuel-powered buses, officials said.

“Thanks to a phenomenal partnership between our student organization and the divisions of Student Affairs and Administrative & Business Services, this fall we will move our students in a fleet of zero-tailpipe-emission vehicles – and be the first university in the country to do so!” said Dan Dooros, associate vice chancellor of student affairs.

“UC Irvine is taking an important step, becoming the first college campus in the country with an all-electric transit fleet,” said Stella Li, president of BYD America. “This forward-looking decision is proof of what many in higher education already know: that electric vehicles aren’t a far-off technology of the future but are here and ready to be put to use today. BYD is proud to be providing these 20 high-quality, California-made buses to UC Irvine.”

La, 21, credited past ASUCI leaders for a student referendum in 2013 that called for expansion and update of the popular, sometimes overcrowded campus system. Including a requirement that the buses use clean energy helped the measure pass, she said. A survey of students last year found that of an array of transportation options, the top priority was providing electric buses over conventional ones.

“It’s a lot quieter, a lot cleaner,” La said of the ride on one of the hydrogen buses already in service.

“The hydrogen electric bus emits no carbon – neither does the battery electric bus,” said engineering professor Scott Samuelsen, who heads the National Fuel Cell Research Center. He noted that while the production of hydrogen power and plug-in electricity does generate carbon dioxide – the leading greenhouse gas contributing to climate change – technology advances will make those energy sources carbon-free in the next few years.

“I’m very excited and proud to be part of a university that’s committed to making great strides toward a more sustainable future for us all,” La said.