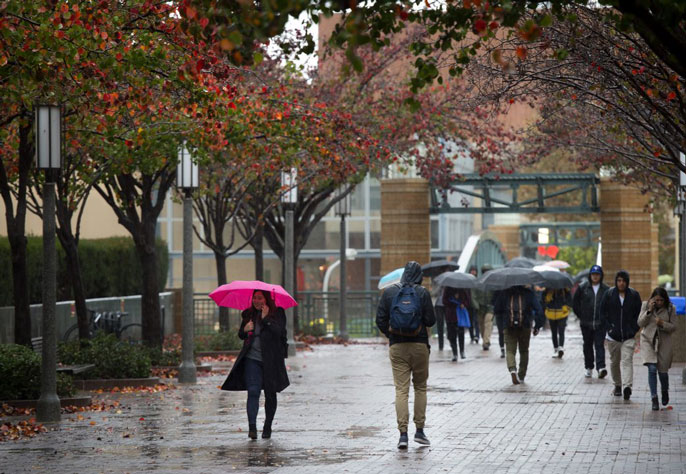 Rain falls on the UC Irvine campus. Climatologists are unsure how much precipitation the next few months will bring to the southwestern U.S. because global warming has decreased the reliability of their forecasting tools.

For Californians from Crescent City to Chula Vista, the second week of 2018 brought rain showers. Was it merely a fluke in the middle of an ongoing dry spell, or does it mean we’re on the verge of another wet winter, similar to last year’s? The answer, according to a UC Irvine climatologist, is up in the air — literally and figuratively.

The two factors that have, historically, affected winter rainfall in California are El Niño/La Niña and air circulation above the Northern Hemisphere, says Earth system science professor Jin-Yi Yu, who has made a career of studying the mechanics of the Earth’s climate and weather systems.

Experts had become skilled at “reading” the ocean-temperature-related conditions to forecast the amount of precipitation the Southwest could expect each year. But recently the predictive powers offered by these phenomena appear to be slipping, with global climate change a possible culprit.

El Niño is characterized by a vast plume of warm water that emerges from the west coast of South America and expands through the tropical Pacific Ocean, ultimately reaching as far as the international date line.

As the condition winds down late in its cycle and the warmer-than-usual water retreats to Peru and Chile, the flux in the tropical atmosphere impacts the jet stream in North America, drawing it and winter storms farther south, meaning an uncommonly wet winter for Southern California.

However, during the last strong El Niño, in 2015 and 2016, the rains never came. Yu says this is because that most recent El Niño died in an unusual way: Instead of retreating, the warm water lingered and stagnated in the central Pacific, which had significantly less effect on the jet stream.

“This is consistent with the argument I’ve been making the past six or seven years, which is that our El Niño has changed,” he says, and currently, there’s no El Niño or La Niña condition in effect anyway.

This year, Yu stresses, it’s all about the internal dynamics of the atmosphere. But even those have recently undergone transformation.

“In a recent paper in the Journal of Climate, we argued that warming in the Arctic and a reduction of sea ice in the polar region has caused a shift in the way our atmosphere functions,” he says. “So that may affect how the jet stream moves north or south, a potential factor that could affect California.”

For example, winter temperature differences of up to 100 degrees Fahrenheit between Singapore and Fairbanks, Alaska, have, traditionally, created a lot of churn and mixing in the fluidic atmosphere above the Pacific Ocean, causing southward movement of the jet stream and more winter rain in California.

But this once-reliable process has been weakening as the Earth has been warming, lessening the temperature disparity between equatorial and Artic regions — and the resultant atmospheric volatility.

Another complication is the emergence of the “Pacific blob,” an area of abnormally high sea surface temperatures lasting more than 12 months. Measurements in the Gulf of Alaska show that there have been 10 Pacific blobs since 1948, five of them after 1990, yet more evidence of human-induced climate change.

“I think the blob could be a key factor in the atmospheric shifts we’re seeing,” Yu says. “For example, in the winter of 2015-16, when the blob showed up, it affected the jet stream location by producing a high-pressure system sitting outside the Gulf of Alaska.”

He acknowledges that more research is needed to determine whether there’s a direct link between the Pacific blob and rainfall in California but says “there’s a possibility. The main thing I want to emphasize is the change in the internal workings of the atmosphere in the Northern Hemisphere brought on by warming in the Arctic.”

Rain or not, there are some dark clouds looming on the climate horizon, but from a scientist’s standpoint, there’s a silver lining.

“This is still just an idea, but we may be able to use the condition of the Arctic as a new method for predicting rainfall in California,” Yu says. “By entering measurements for the sea ice extent and concentration in the polar region in a computer model, we may be able to predict where the jet stream is going to be located in three or six months.”

He adds: “El Niño has a negative part but also a positive part, in that it has been a way to project rainfall in California. Global warming is obviously very negative, but there may also be a positive angle — using Arctic warming to help us forecast wet or dry winters here.”

In the meantime, keep the umbrella and rain boots handy — just in case.