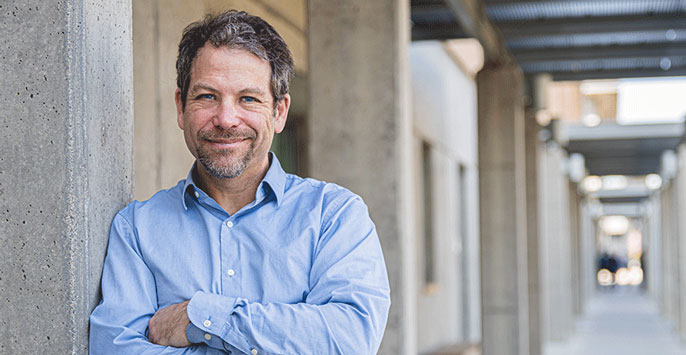 Breakthrough collaborative science by an interdisciplinary team of researchers brought together by computational biology professor David Ardell promises a new approach for treating all types of infections.

Infections have become more dangerous in recent years because bacteria and parasites rapidly evolve resistance to the medicines.

But Ardell’s lab and a team of researchers from two other universities used a novel genomics- and systems-biology-based approach to find chemical compounds — extracted from bacteria harvested from the ocean — that could inhibit enzymes from a broad spectrum of related parasites without affecting human versions of those enzymes.

The team also describes a strategy for administering new drugs to be developed from their technology that should make it harder for parasites to evolve resistance to them.

“It’s a first step toward fulfilling the promise of the genomics era to inform how we combat disease,” Ardell said.

The two ways doctors treat infections now are with vaccines, which program the immune system to fight off specific invading organisms such as the ones that cause measles, mumps and polio; or with antibiotics, anti-fungals or anti-parasitics, which poison the harmful organisms. But because parasites are more closely related to humans than other pathogens, anti-parasitics also tend to be toxic to humans and are harder to discover.

“Our method targets the evolving cellular language of the parasites instead of their chemistry,” he said. “That’s why we’ll be able to apply this to bacterial infections, too — it’s applicable to any disease-causing organism for which the genome has been sequenced.”

Ardell said he and the other team members were pleased to find they could predict and identify functional differences in the enzymes from humans and trypanosome parasites based on genomic sequences alone and show that these differences are highly conserved over 250 million years of trypanosome evolution.

There are several types of infectious agents — including bacterial, parasitic, viral, fungal and prion — that cause all kinds of illnesses, from common colds and flus to such potentially life-threatening diseases as coronavirus, Zika, MERSA, C-Dif, Mad Cow disease, HIV, Ebola, African sleeping sickness, Dengue Fever and many others.

The immune system is usually an effective barrier against infectious agents, but colonies of pathogens can grow too large for the immune system to fight. That’s when infections become harmful.

For example, the Centers for Disease Control (CDC) estimates there are 1.7 million healthcare-acquired infections each year in American hospitals, and 99,000 associated deaths each year. The majority are urinary tract infections, but people also get surgical-site infections, pneumonia and other lung infections, and bloodstream infections.

However, after decades of over-prescription and overuse, antibiotics have become increasingly ineffective, and pharmaceutical companies are not often developing new ones.

Ardell established the collaboration developing this novel approach seven years ago. A project grant focusing on trypanosomes, which cause diseases such as sleeping sickness, was funded by a grant from the National Institutes for Health to Ardell, Ohio State University Professor Michael Ibba, a University Distinguished Scholar of Microbiology, and other collaborators including Roger Linington, Canada Research Chair in High-Throughput Screening and Chemical Biology at Simon Fraser University.

Ardell, a member of the Department of Molecular and Cell Biology in the School of Natural Sciences and an affiliate of the Health Sciences Research Institute, said the study carries enough experimental validation to allow the research to move to the next steps, including more testing.

He plans to expand the project through a collaboration with professor Clarissa Nobile, who examines Candida auris, a fungal infection that has made headlines in the past few years as hospitals experience outbreaks of drug-resistant strains.