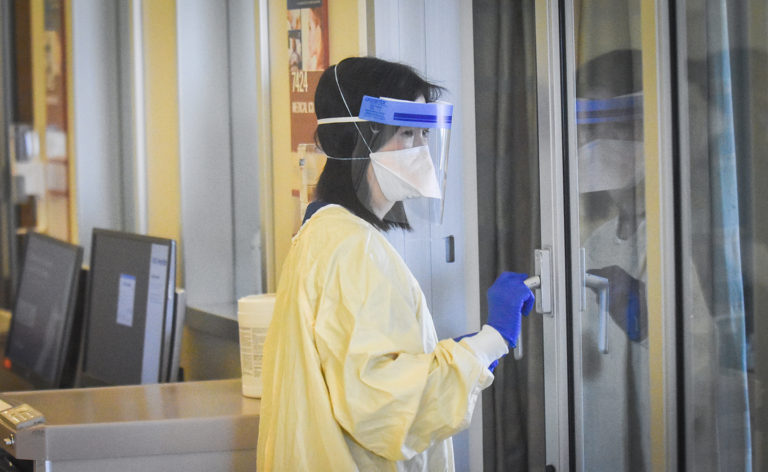 She can see it in their eyes.

Linh Tran, a respiratory therapist at UCI Medical Center for 14 years, currently is caring for three patients with COVID-19, as well as many other adults with critical illnesses, in the hospital’s intensive care unit.

When her patients have to be put on ventilators, they cannot speak. As she performs such tasks as regulating the amount of oxygen being mechanically pumped into their lungs and monitoring medication being delivered intravenously, Tran searches their eyes for clues to what they’re thinking – and feeling.

“If a patient is alert,” she says, “I’ll hold their hand and tell them, ‘Everything will be OK.’ Because they can’t talk, it’s hard to understand what they need. But I can see it in their eyes. My older patients tend to be more scared – especially those who don’t have any family around.”

As the COVID-19 pandemic rages on, respiratory therapists like Tran are the unsung bedside heroes who tend to critically ill patients on ventilators.

With visitors currently banned from UCI Medical Center except in end-of-life and a few other cases, the human touch that RTs have always provided has become a little more special.

“They’re making a very personal connection with these patients on ventilators,” says Teri Allen, UCI Health’s director of respiratory care services. “Most people had never heard of a respiratory therapist or a ventilator until this pandemic happened.”

A ventilator is a lifesaver on wheels – a machine that breathes for patients when they can’t because of serious illnesses such as COVID-19, which ravages the lungs.

“As soon as we intubate a patient [insert a breathing tube into the airway] and put them on a ventilator, it’s always our goal to figure out how we’re going to get them off the ventilator,” Allen says.

“We have to be careful that we don’t damage the lungs while we’re trying to heal people. Primarily, we try to keep them nice and calm so that the ventilator can do its work and allow their body to recover.”

There are two framed words on a wall just outside her office: “Inhale” and “Exhale.” A 20-year veteran of UCI Health, Allen has 68 RTs in her department, which she has run for about three years. The RTs work throughout the hospital, mainly in ICUs.

Under normal operations, UCI Health has 70 critical care ventilators at its hospital in Orange, Allen says. As the facility has prepared for a possible surge in COVID-19 patients, it now is equipped with some 120.

Integral part of the team

Allen worked in finance before becoming an RT in 2000. She got interested in the specialty while studying to be an EMT, a career choice fueled by her accident-prone son.

After obtaining an associate degree in respiratory therapy and her state license as a respiratory care practitioner, Allen went on to earn a bachelor’s degree in health administration.

“RTs are highly trained in cardiopulmonary processes,” she says. “They’re an integral part of the hospital care team that’s at a patient’s bedside 24/7 with the nurses and the doctors, and most people don’t know that.”

Typically at UCI Medical Center, an RT will be responsible for four patients during every 12-hour shift.

Due to the COVID-19 pandemic, UCI Health RTs wear gowns, gloves, masks and face shields. Tran says she feels safer caring for COVID-19 patients who are on ventilators because she’s well-protected – and the patients can’t readily spread the virus.

“I’m more concerned about the people who come in whose COVID-19 status is unknown,” she says.

For her patients on ventilators, Tran makes sure to carefully explain what she’s doing – even if they’re unconscious.

And she’s committed to delivering the human touch.

One of her patients, a woman in her 70s who had suffered a stroke, felt abandoned by her family. Tran tracked down the phone number of the woman’s daughter and used her own cellphone to let them communicate. They talked so long that her phone died and they had to switch to the hospital telephone.

During the just-ended Holy Week, Tran prayed with another patient who was a Christian. “I feel that, especially these days, I’m doing a good job,” she says.