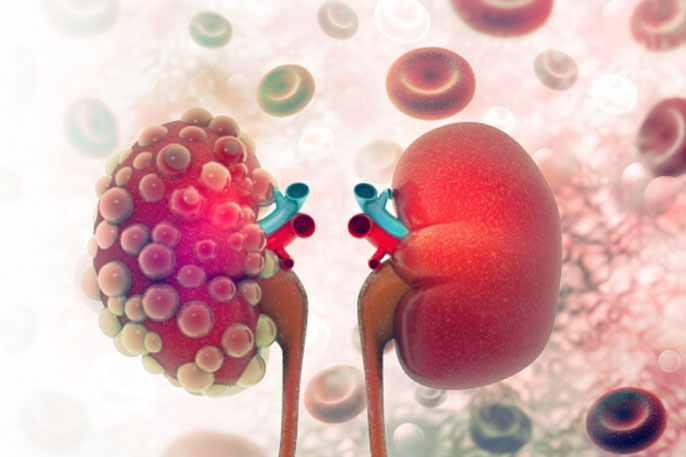 Hereditary and relatively common, polycystic kidney disease (PKD) has long been thought to be progressive and irreversible, condemning its sufferers to a long, slow and often painful decline as fluid filled cysts develop in the kidneys, grow and eventually rob the organs of their function.

Once their kidneys fail, PKD patients often require dialysis several times a week or must undergo a kidney transplant. To make matters worse, a host of other PKD-related conditions and complications add to the patients’ health burden, including high blood pressure, vascular problems and cysts in the liver. And that doesn’t take into account the medical costs and the reduced quality of life.

Progress toward finding a cure has been sluggish, with only one drug proven to slow — but not stop — the progression of PKD.

But now, thanks to research conducted by UC Santa Barbara biochemist Thomas Weimbs, postdoctoral researcher Jacob Torres and their team, a solution may be no farther than the end of your fork. Diet, they discovered, could hold the key to treating PKD.

“It’s surprisingly effective —  much more effective than any drug treatment that we’ve tested,” Weimbs, whose work focuses primarily on the molecular mechanisms underlying polycystic kidney disease and related renal diseases, said of his group’s discovery. Their work appears in the journal Cell Metabolism.

In previous studies, the research team found that reducing food intake in mouse models slowed the growth of polycystic kidneys; but at the time, they did not know why. In their new paper, the scientists have identified the specific metabolic process responsible for slowing the progress of the disease.

The best part? It’s a process many of us already know well.

“There’s a way of avoiding the development of the cysts through dietary interventions that lead to ketosis,” Weimbs said.

You heard that right: Ketosis, the underlying metabolic state of popular diets such as the ketogenic diet, and, to a lesser extent, time-restricted feeding (a form of intermittent fasting), has been shown in the Weimbs group’s studies to stall and even reverse PKD.

“The cysts appear to be largely glucose-dependent,” Weimbs explained. In people with the predisposition toward PKD, the continuous supply of sugar in the high-carbohydrate, high-sugar diets of modern culture serve to feed the growth and development of the fluid-filled sacs.

“Ketosis is a natural response to fasting,” Weimbs said. “When we fast, our carbohydrate reserves are very quickly used up. In order to not die, our bodies switch over to a different energy source and that comes from our fat reserves.” The fat reserves, he continued, are broken down into fatty acids and ketones which then take the place of glucose in providing energy to the body. The Weimbs team found that the presence of ketones in the blood stream in particular inhibits the growth of the kidney cysts. And with a steady supply, ketones actually acted to reverse the condition in their animal studies.

The problem with typical Western diets is that we almost never go into ketosis: we eat high-carb, high-sugar foods almost continuously throughout the day, securing for ourselves a continuous supply of glucose. In the ketogenic diet, the body’s typical “go-to” source of energy — glucose — is taken away as ketogenic dieters focus on non-carbohydrate foods, eventually forcing their bodies to mimic the fasting response. Time-restricted feeders, meanwhile, reach that state by limiting the window of time they eat to a small part of the day, leaving the remaining 16-20 hours of their day for the body to use up the carbs and sugars and switch over into ketosis.

Ketones are actually a class of three different naturally occurring molecules, said Weimbs. Of particular interest and effectiveness is one called BHB (beta hydroxybutyrate), which has been shown “to affect numerous signaling pathways that are implicated in PKD,” according to the study. The team found that by just feeding that ketone to rats with PKD, they were able to create the beneficial effects of ketosis, no special diet restriction needed.

“Which makes this really amazing,” Weimbs said. “On top of a normal high-carb diet, which they can eat all day long, if we give them BHB, they’re fine.” After five weeks of treatment with BHB in the drinking water, rat polycystic kidneys were “nearly indistinguishable” from normal ones.

In fact the researchers were so surprised by their result they thought they had made a mistake. “I was so surprised by the effect of BHB treatment that I had to go and double-check all the genotypes of the animals to make sure they had PKD to start with,” said Torres, the paper’s lead author. “The effect was really unlike anything I had encountered before.

“The impact of this research has huge implications on the field of PKD,” Torres continued. It provides a framework, he said, for understanding the pathology of PKD from a metabolic viewpoint and adds another disease to the list that a ketogenic diet can be used to treat. “Our discovery also has implications for understanding cellular metabolism at a fundamental level as we learn more about what has gone wrong in our disease models. I am really looking forward to the future of research in this field as we explore this new space and uncover even more about what is really going on in PKD.”

An assist with ketosis

It’s quite possible to reach ketosis just by avoiding carbs or by fasting for a period of time. “It’s a very natural way to have your own body produce BHB,” Weimbs said. “So something like a time-restricted diet is feasible.”

But the key to success with diet-related issues is consistency. Ask virtually any dieter and they’ll tell you that staying on track is the difficult part.

For those with polycystic kidneys who could use an assist with ketosis, whether or not they need to lose weight or wish to change their diets, the Weimbs lab is developing a dietary supplement to add BHB to their regular intake. This patent-pending nutritional supplement would be similar to commercially available ketone products being offered as energy boosters, but formulated specifically for supporting kidney health.

“We want to make sure we don’t put anything harmful into the bodies of people with potentially compromised kidney function,” Weimbs said. “And some of the ketone products already out there are high in potassium and other ingredients that could be detrimental.”

In addition, the supplement being developed is combined with another nutrient the Weimbs Lab has recently shown to inhibit cyst formation in PKD by a completely different mechanism from BHB, thereby approaching the problem from two directions. While not a drug — and therefore less expensive and essentially free of serious side effects — the supplement is nevertheless intended for use by those under medical supervision. Members of the Weimbs team are planning to conduct a clinical trial to test their supplement mixture in people with PKD. Assuming all goes well, they are planning to launch a company to make it available.

“We’re really excited that we can actually provide a supplement that potentially could help many more people than dietary intervention alone,” Weimbs said.