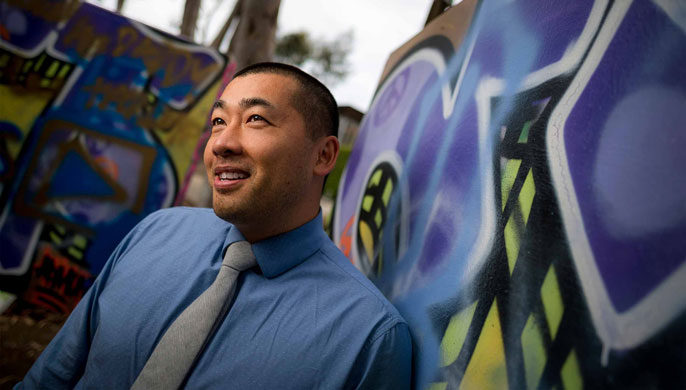 Tom K. Wong almost didn’t graduate from high school. Wong was 16 when his parents first told him that he was an undocumented immigrant, and the news shattered him.

“The rest of high school was just a joke,” he said. The honors student couldn’t go to college, so he gave up caring. He got a diploma but barely, squeaking by with a “D-” in English. Wong is 34 now and a Ph.D.-holding member of the political science faculty in UC San Diego’s Division of Social Sciences. He has completed his second book. And he has just been detailed by the U.S. government to serve as a policy advisor on a White House initiative to improve the quality of life for Asian Americans and Pacific Islanders by increasing access to and participation in federal programs.

Wong, who specializes in immigration politics and policy, said his six-month appointment with the initiative will focus primarily on President Obama's executive actions on immigration, as well as on a new White House effort to increase citizenship acquisition among eligible immigrants.

His official start day in Washington, D.C. is May 2. On April 18, the U.S. Supreme Court began hearing a case brought by Texas and 25 other states challenging Obama’s executive order that would shield from deportation some 4 million undocumented immigrants whose children are U.S. citizens.

These politics are personal for Wong, and he watched the coverage closely from his home in North Park. As reports came in about the justices dividing 4-4 along ideological lines, Wong tweeted scenes of immigrant-rights supporters rallying in front the nation’s top court. “#fightforfamilies trending on Twitter,” he noted.

Wong’s parents brought him and his older brother from Hong Kong when Tom was 2 years old. They stayed long after their tourist visas expired and, for years, did not tell their sons. Wong grew up thinking, and feeling, he was American.

When Wong was beginning elementary school, the family moved to an area of Riverside, Calif. called “Casa Blanca.” Casa Blanca is a classic California barrio, mostly Hispanic-American and Latino. It is also a neighborhood notorious for gangs and violence. It has quieted now but once it figured in Calvin Trillins’ book “Killings.” The family’s first night there, Wong recalls, they went out to eat and came back to an empty, burgled home.

“Every night, we heard the ‘ghetto birds’ fly by – the police helicopters,” Wong said. “Casa Blanca is famous for shooting down ghetto birds. I was exposed to drugs. I saw guns. I had guns pointed at me.”

“I grew up very quickly living in Casa Blanca,” he said. “I was from a poor family in a poor neighborhood but going to the same schools as the rich kids. The top 1 percent and bottom 1 percent in Riverside ended up going to the same schools, go figure. So I learned about class very early on in my life. I learned about what I didn’t have. I also learned how easy it was to use differences – rich/poor, white/brown, white/black, black/brown – as an excuse for violence.”

By eighth grade, Wong moved with his family a couple of blocks away into a safer neighborhood. He had Hispanic friends, African American friends, and Caucasian friends. “As an Asian basketball player from Casa Blanca,” he said, it was “easy to fit in with the different cliques” in the new neighborhood. He felt savvy and comfortable everywhere.

At age 15, Wong wanted to go to a basketball tournament with his team in Canada, but his parents said “no.” He thought they were just being strict Chinese parents (not that he’d have trouble returning over the border without papers), and he put it out of his mind. By 16, when he was pushing hard to get a driver’s license, they finally told him: He couldn’t apply for a driver’s license because he was undocumented.

He remembers yelling at them in broken Cantonese and switching to English for the curse words.

He was angry. And he felt broken.

“Learning you’re undocumented has consequences for everything you do and will do, can do,” Wong said. “The rest of high school was just a joke. I stopped studying. After high school, my options were to stay and work at swap meets with my family. Or, go to Hong Kong, wait for 10 years, and then try to come back.”

By 19, he was ready to go – to the “home” country he didn’t even know. “Knowing what I know now, that wouldn’t have worked. There wouldn’t have been a way back.”

But his story took a happier turn. Rose, his girlfriend of five months, proposed. He balked at first but then decided to take the plunge. Rose was “the one.” They got married in Las Vegas in 2001. They’re still together 15 years later and parenting triplets now, 5-year-old boys named Soul, Pace and Ever.

After Wong got his green card, college became an option again. But that D- in English stood in his way. Luckily, he said, the teacher of that class was willing to write a letter to admissions officers saying that Wong was much brighter than the grade suggested. UC Riverside accepted him on the condition he prove himself in summer school. Wong enrolled in a World Politics course and aced it. “A+.”

He caught the political-science bug in that summer-school class. “But researching immigration is not what I thought I’d be doing,” Wong said. “I thought I would work at the U.N. as a human-rights monitor, going into conflict situations and making sure rights weren’t abused.”

Wong actually resisted specializing in immigration until his advisors, and his conscience, compelled him.

“My own immigration experience is my comparative advantage as an academic,” Wong said. “It’s very easy to step back into my 16-year-old self and remember what it was like to find out that I was undocumented. That experience continues to drive and motivate me to do the work that I do.”

His research has been used by policymakers in the U.S. and in Mexico, as well as by organizations that serve immigrant communities. At UC San Diego, in addition to being on the faculty of the top-ranked Department of Political Science, Wong is an affiliate of the Center for Comparative Immigration Studies and serves as director of the International Migration Studies minor offered by Eleanor Roosevelt College. (The minor is the first undergraduate instructional program with this focus offered at any university in the U.S.)

Both on- and off-campus, Wong supports and advocates for immigrants and “DREAMers,” undocumented youth who remind him of himself.

He was the lead researcher on one of the first nationwide surveys of undocumented youth, a study he and his co-author titled “In Their Own Words.” Covering nearly 100 topics, the survey was an unprecedented look at the civic engagement and political participation of undocumented millennials. It was widely covered by the press, including the New York Times, which reported on these youth’s disenchantment with both the Republican and Democratic parties.

The forthcoming book includes work Wong did for his “CIR Blog,” tracking comprehensive immigration reform in Congress. His accurate predictions of support and opposition to reform among 535 members of Congress led the Los Angeles Times to dub him “the Nate Silver of immigration reform – the go-to data geek with the crystal ball.”

But the Nate Silver title doesn’t sit well with Wong – not because his Chinese name is Tak Kei, but because many political scientists “do incredible work that does not get recognized more broadly.” Wong expects he’ll continue working with statistical models but says his next set of projects will likely involve a broader range of methods.

Demography is not destiny

The demographic composition of the United States is changing. The U.S. Census Bureau calculates that 50.2 percent of the children under age 5 living in the U.S. in 2014 were minorities. By 2060, the minority population is expected to rise to 56 percent of the total.

“You can’t escape diversity even if you wanted to,” Wong said. “How do you govern diversity?” He plans to explore how attitudes change in the context of rapidly changing demographics – or “the new American majority,” as Wong likes to put it – and the effects that has on politics.

He will be partnering soon with natural scientists, he said, to get biofeedback on attitudes. He hopes to study how people react when watching “Black Lives Matter” protests in Ferguson, for example, or looking at pictures of Middle Eastern refugees waiting to get into the EU. “I want to know how people respond – not just what they say but how they’re feeling,” Wong said.

Meanwhile, his work in DC will also include, he said, “a research component aimed at increasing Asian American and Pacific Islander uptake in various federal programs, an inter-governmental agency component aimed at identifying issue linkages that are particularly salient for AAPIs, and an international component that includes working with the consular networks of various governments.”

He will continue working on getting immigration reform in the next Congress, “even though the outlook isn’t good,” given the highly partisan politics.

“Demography is not political destiny,” Wong said. “For demographic change to translate into political power, you must have purposive engagement of the new American majority.”

Political candidates and campaigns pay attention to likely voters, Wong said, and likely voters remain disproportionately white. “So, we have to engage low-propensity voters of color and immigrant communities.”

Wong relishes the prospect of making a difference both through his research and on the ground. His parents, who are naturalized U.S. citizens now too, are very proud.