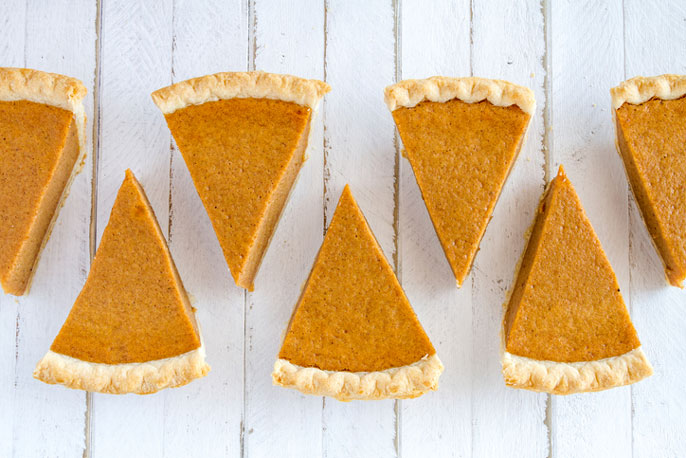 Before you gobble down that Thanksgiving turkey and pumpkin pie, take a moment to maximize your enjoyment.

The University of California has experts on every topic imaginable, including food and the science of taste and sensory experience. Here are their pro tips on making the most of your holiday meal.

1. Slow down and pay attention

People get the most pleasure from their food when they take the time to savor it fully, said UC Davis sensory scientist Michael O’Mahony. Try having everyone at the table taste the same food and then describe all the sensations they get from it. Everyone can write them down and then share their lists with each other. The person who finds the most sensations wins.

Flavor comes from both smell and taste, but the brain makes it difficult to tell the difference. When you smell your food while eating it, the volatile molecules go up to the nose through a back passage and stimulate the smell receptors. That’s one of the ways the brain knows there is food is in your mouth. But rather than triggering a smell sensation, it feels like a broadening of taste.

Here’s an experiment to show how much smell contributes to flavor: Hold your nose while putting some food in your mouth. Concentrate on the taste sensations you are getting. As you swallow, release your nose and notice how the flavor expands. The experiment works best with foods that have a strong odor such as a wine, sweet fruit drinks or gravy.

“Every time you eat you experience an illusion,” O’Mahony said.

If your host happens to serve a cheap red wine that is high in tannins (bitter), here’s a tip to make it taste better: Put a pinch of salt in your mouth, O’Mahony said.

“The salt suppresses the tannin,” O’Mahony said. “Taste it again and it will taste like a mature wine.”

Are there more than just five basic tastes?

“It depends what you mean by basic taste,” O’Mahony said. “No one has ever really defined it properly. So it is a bit silly to say there are five things when we haven’t actually defined what we are talking about. Whatever definition we choose, we don’t know how many there are. There are certainly lots of different tastes.”

Amina Harris, director of the UC Davis Honey and Pollination Center, convened a taste panel to help develop the honey flavor wheel with more than 100 flavor profiles from leather and lemon to cotton candy and even cat pee.

“In general, honey is called sweet, but it has a huge amount of flavors,” Harris said. “Cat pee,” she adds, “is real. It’s very pungent.”

There are more than 300 honey varieties available in the United States. Citrus has even more diversity.

Tracy Kahn curates UC Riverside’s Citrus Variety Collection, one of the world’s largest with more than 1,000 varieties of citrus and citrus relatives.

“We have ranges of colors, sizes and shapes,” Kahn said. “There are fruits that are red, blue, purple, orange and yellow. There are fruits as big as a person’s head and as small as a green pea, and a tremendous amount of aromas.”

UC Riverside itself has developed more than 40 citrus varieties, including popular Tango mandarins, and is working to develop new varieties all the time, including ones resistant to citrus greening disease.

For young children, Kahn suggests Kishu mandarins, which are small, seedless, sweet and easy to peel.

Try mixing in your time-honored traditions with something new.

Kahn suggests making an appetizer with Australian finger lime, a citrus relative that tastes like lime but looks like caviar.

“Specialty chefs are using this,” Kahn said. “You could serve it with cream cheese and smoked salmon on crackers.”

Yuzu looks like a yellow mandarin, but it’s not sweet and has a strong aroma. Its acidic juice can be used in sauces such as ponzu, she said.

Kahn also likes to add citrus to water. She suggests using variegated pink-fleshed Eureka lemons, which have rinds that are green, pink and white.

If you’re looking for an alternative adult beverage, try mead (honey wine), said Harris, whose center at the Robert Mondavi Institute for Wine and Food Science hosts courses in making the popular drink.

This Thanksgiving, Harris plans to make a walnut-cranberry tart with honey instead of corn syrup while her daughter will make samosas instead of mashed potatoes.

The holiday spread can be filled with temptations. Enjoy, but choose wisely. Don’t eat until it hurts. Remember, some of the dishes might taste even better the next day.

“There are always leftovers,” Harris said.

Take a look at how to make the best pie ever for the holidays in the video below: