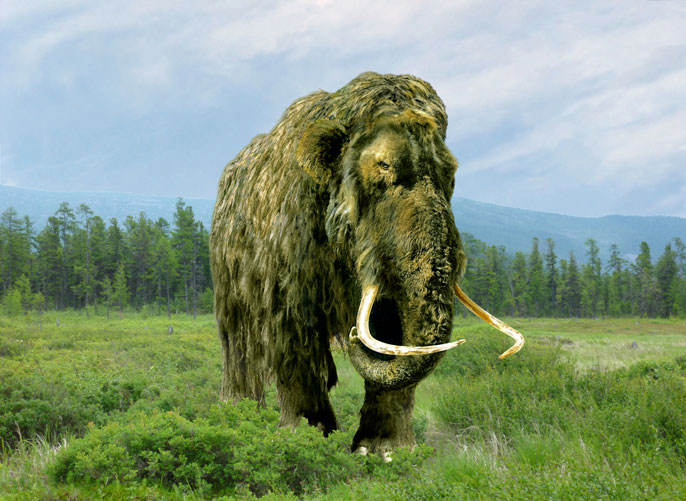 As scientists get closer and closer to being able to bring extinct animals back to life, big questions emerge. What led to extinction in the first place? What would be the impacts on other species or the environment? Just because we can do it, does that mean we should?

To help answer these questions and celebrate the inaugural year of the UC San Diego Institute for Practical Ethics, guest speaker Beth Shapiro — a world-renowned professor of ecology and evolutionary biology at UC Santa Cruz — spoke to a packed house of researchers and students from across campus and the greater community on April 19.

She quickly cleared the air about the possibility of bringing back the Woolly Mammoth.

“Just to clarify,” she said, “de-extinction is still not possible. We cannot bring something that is extinct back to life,” including mammoths, passenger pigeons, Neanderthals, the dodo, dinosaurs or any other extinct species — at least not 100 percent.

What may be possible, however, is using in-tact pieces of ancient DNA to modify the DNA of existing animals in order to resurrect specific traits: thicker hair for elephants, for example. Shapiro calls this “genetic rescue,” and sees it as a worthy scientific pursuit to save current animals from future extinction.

“Shouldn’t we be focusing on things that are still alive, instead of trying to bring things back that aren’t here anymore? Yes, we should be,” she said. “Instead of focusing on the science fiction of bringing something back that’s gone, we’re talking about … strategies of using these same approaches—genome editing, DNA sequencing — to save species that are still alive.”

Shapiro is a McArthur Fellow, National Geographic Emerging Explorer and author of the award-winning book “How to Clone a Mammoth: The Science of De-Extinction.” Her work entails using some of the most sophisticated and groundbreaking techniques available in genetic engineering to understand evolutionary history and advocate for policy that protects living species.

“I’m trying to understand, using the DNA that we get from [ancient] bones, how species change in response to large-scale changes in climate,” she said. “The goal of my research is to learn from the past to be able to make informed decisions about how we use the limited resources that we have, to protect species that are in danger today.”

Sponsored by the Institute for Practical Ethics — with the overall purpose of promoting research and multi-disciplinary discussion about the ethics of science, technology and medicine — co-directors John Evans and Craig Callender said having Shapiro as their guest speaker was the perfect example of the mission and impact of the institute.

Shapiro said there will “probably” be an elephant born one day that has some form of mammoth DNA.

“But isn’t it great,” she said, “that we can have all of these conversations — talk about what we should do and could do, and how to regulate it, and who should own it … and what our moral authority is to do any of this — before that technology exists? And that’s why institutes like this have such an amazing place in society today.”

It was Callender’s own inquiry that led, in part, to the establishment of the Institute for Practical Ethics. In 2016, San Diego Magazine featured Callender’s “Big Idea” — that UC San Diego could become a major voice on ethical science — to shed light on the opportunity for society to get ahead of scientific advancements like driverless cars, big data collection and genetic engineering.

One of the world’s greatest producers of cutting-edge, scientific knowledge, UC San Diego now has ethicists and social scientists working “hand-in-hand” with biologists, medical researchers and engineers, Callender said, training each other in their respective fields to genuinely try to discover the best path forward by considering all impacts.

“We’re becoming an active part of a new model of socially responsible science,” said Callender, a professor in the Department of Philosophy. “In this model, ethicists and social scientists are drafted right from the start to work alongside other scientists. Our goal is that this specific UC San Diego model — featuring partnership across disciplines, active student engagement and learning, and the audacity, if you will, to take ideas and concepts apart for the betterment of society — becomes a paradigm for other to fellow.”

In collaboration with the UC San Diego Tata Institute for Genetics and Society, one of the first topics the institute addresses is the ethical and social implications of gene-drive technologies, or genetically modifying a species to control for what traits are passed down or not. Evans, a Division of Social Sciences associate dean and professor in the Department of Sociology, said analyzing ground-breaking science like this from a social and humanistic perspective is imperative.

“Many people have asked if we, as a society, should genetically modify the human species to make us resistant to any number of diseases. From the scientists, we would first learn what, if anything, is possible,” he said. “Social scientists, then, can predict what society might actually do, were this technology to become available. Similarly, ethicists can access long-established ways of thinking on the morals and ethics of an advancement such as this.”

A signature initiative in the Division of Arts and Humanities, the Institute for Practical Ethics was launched in 2017 with the initial support of loyal campus donors Joel and Ann Reed. The Reeds committed to provide generous annual gifts to support the institute in the near term, and to create a $1 million endowment for permanent support in the future, all part of the Campaign for UC San Diego.

“Through this institute, we focus our efforts to see that the scientific progress of both our university and global community will include and benefit all people, that our curiosity will be matched by our empathy and that good science is responsible, socially conscious science,” said Cristina Della Coletta, dean of the division. “Our strong interdisciplinary culture has laid the groundwork for ethicists, philosophers, sociologies, scientists and policymakers to work together, welcoming collaboration with fellow academics both on and off campus.”

Shapiro’s full presentation “Can We, Should We and Will We Bring Back the Woolly Mammoth?” was recorded and will air on University of California Television in early May.