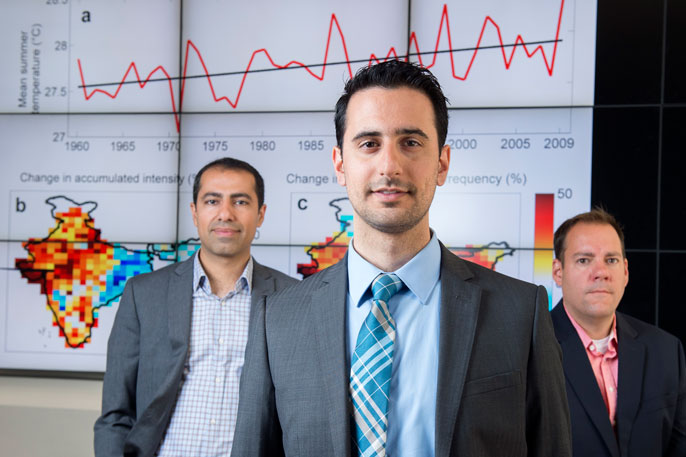 An increase in mean temperature of 0.5 degrees Celsius over half a century may not seem all that serious, but it’s enough to have more than doubled the probability of a heat wave killing in excess of 100 people in India, according to researchers at the University of California, Irvine and other institutions.

This could have grim implications for the future, because mean temperatures are projected to rise by 2.2 to 5.5 degrees Celsius by the end of this century in the low- and mid-latitude countries of the Asian subcontinent, the Middle East, Africa and South America.

“The impact of global climate change is not a specter on the horizon. It’s real, and it’s being felt now all over the planet,” said Amir AghaKouchak, UC Irvine associate professor of civil and environmental engineering and co-author of the study, published in Science Advances. “It’s particularly alarming that the adverse effects are pummeling the world’s most vulnerable populations.”

Using data gathered by the India Meteorological Department from 1960 to 2009, the UC Irvine-led team analyzed changes in summer temperatures; the frequency, severity and duration of heat waves; and heat-related deaths.

They found that when mean summer temperatures in the South Asia nation went from 27 to 27.5 degrees Celsius, the probability of a heat wave killing more than 100 people grew from 13 percent to 32 percent — an increase of 146 percent.

India is currently home to over 1.3 billion people, nearly a quarter of whom live on less than $1.25 a day and have little to no access to electricity.

“In addition to India, populations in other developing countries in low- to mid-latitude regions are especially hard hit by these extreme heat events,” said lead author Omid Mazdiyasni, a UC Irvine graduate student in civil and environmental engineering. “They lack air conditioning that people in richer countries rely on when the heat is unbearable, and they don’t have funds to escape to cooler climates.”

The study authors stressed that their findings should serve as a wake-up call for governments and international organizations to help improve the resilience of areas most vulnerable to climate change-induced weather events. But in the wake of last week’s news of the United States withdrawing from the Paris climate accord, they acknowledged the difficulty in building a broad-based coalition to tackle the issue.

“Given the quantifiable impacts of climate change in India and other developing nations in the coming decades, both rich and poor countries should be ramping up our efforts to combat global climate change instead of turning our backs on commitments we have made to the international community,” said co-author Steven J. Davis, UC Irvine associate professor of Earth system science.