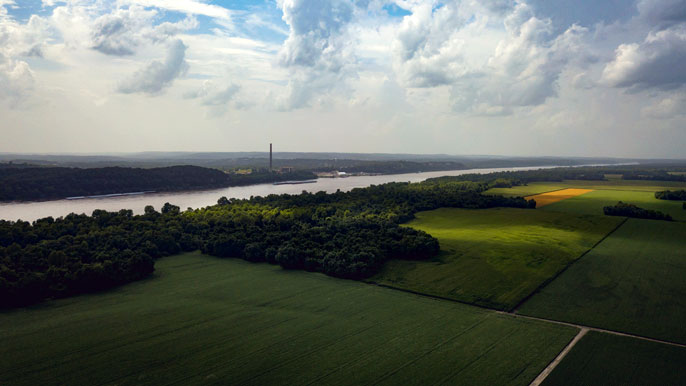 Towns near the Mississippi River, shown here, are particularly threatened by climate change and rising waters.

Climate change is bringing more water to people’s doorsteps, devastating communities. Entire towns are moving to escape rising waters. But how do towns address these growing threats and still retain their sense of community? Flood experts at UC Davis are visiting dozens of communities to find out. This is the story of two of those towns.

On Fourth of July weekend, the residents of Old Valmeyer sit in their front yards and watch the parade.

They sit in their yards, but their houses are no longer there. They were destroyed after the Mississippi River breached a levee and swallowed the town in the great flood of 1993. Only a handful of houses were spared.

But then Valmeyer, located about 20 miles east of St. Louis, pulled off what many towns hit by devastating floods rarely do. Roughly two years after the flood, the whole town moved to higher ground — a concept called “managed retreat.”

New Valmeyer sits above a limestone bluff, less than 2 miles from Old Valmeyer, on what was once a corn field. A handsome new school helps form the town center. And while nothing can ever be the same, in many respects the town has retained its sense of community while also experiencing economic and population growth.

“Small, rural communities don’t often have the resources and political capital to organize a relocation like this,” said Nicholas Pinter, a geology professor and flood researcher with UC Davis.

Much of the credit goes to Dennis Knobloch, mayor at the time of the flood. He worked tirelessly to ensure the community had a voice in decisions before and after the flood, met with government officials — from the governor of Illinois to White House staffers — and helped secure funding for disaster relief and relocation efforts. He told policymakers the move would be “a benefit to future generations and the government not to have to bail out our community” from future floods.

Pinter wants to quantify that benefit.

That’s why he and undergraduate James “Huck” Rees have been walking block by block, house by house, across “move towns,” as Pinter calls them. They compare reality with satellite data on their electronic tablet, often finding mismatches. What looks like a house on the screen can turn out to be a shed, for example.

River flooding continues to be the deadliest and most costly natural disaster threatening the U.S. and the world. This research could help answer: How much money do local and federal governments save when towns move rather than rebuild after each flood? Why do some towns successfully move while others don’t? What is the best way to relocate?

Current climate projections indicate that one-third of U.S. residents will be affected by more frequent inland flooding by 2050.

The researchers hope their work, funded originally by the National Science Foundation, will help other towns facing similar challenges reduce their risk of flooding and, if appropriate, consider moving out of harm’s way.

Valmeyer is considered a success story in the literature of managed retreat, but it almost didn’t move at all.

After the first flood waters hit in August 1993, the town was going to repair and rebuild. Then a second surge of water came through in September, flooding Valmeyer again. That back-to-back, double-punch often convinces a “move town” to actually move.

“After that, there was a total change in attitude of the people here,” said Knobloch. “Most people said, ‘That’s it. We’re done. We don’t ever want to deal with flooding again.’”

Garrett Hawkins, a farmer and volunteer firefighter, stayed. He was 13 when the water came through, flooding not just his town, but his family’s farm and livelihood. They ultimately lifted their house higher but kept it on the property.

“My life was this farm,” Hawkins said. “I had to be close to the land. It’s not like I can just pick up and move my land somewhere else. And it’s home. It’s hard to leave home.”

When the rain comes

Leaving home is hard. Many residents say the move was a good thing, that they’re proud of how they came together and the new town they’ve built. They also say it doesn’t quite have the feel and character of the historic old town. After 26 years, there is still a deep sense of loss.

But looking back, Knoblach said moving has been worthwhile.

“At least the people here don’t have to be looking over their shoulders when the rain comes,” he said.

Whereas Valmeyer had the attention of the president of the United States, The New York Times, and was even the subject of an off-Broadway musical, the relocation of Odanah, Wisconsin, away from the banks of the Bad River, was all but unknown to the outside world.

Odanah is one of four unincorporated communities on the reservation of the Bad River Band of Lake Superior Tribe of Chippewa (Ojibwe). It has faced nine major floods since 1873, including two during the past two years.

Pinter ran across mention of the town’s relocation in a single line of an academic paper. He dug up a 1955 feasibility study from the U.S. Army Corps of Engineers, which concluded its relocation was not feasible. But when he checked satellite imagery, only two or three structures were left in Odanah, with a new town to the east. If the satellite image was correct, Odanah could be one of the nation’s most successful cases of managed retreat.

“I’m not so sure I’d call it a ‘success,’” Tribal Historic Preservation Officer Edith Leoso told him during a visit to Odanah in 2018.

She confirmed that, yes, in its lumber-milling heyday, more than 10,000 people lived in Old Odanah. By the late 1950s, the population had dwindled to around 300. After the U.S. Army Corps of Engineers decided not to help Odanah move off the floodplain, tribal leaders moved themselves to a new town site 1.5 miles to the east. Now just one occupied home is left in Old Odanah, along with a large, historical Catholic church next to the pow-wow grounds.

The relocation happened gradually and was largely funded by the U.S. Housing and Urban Development Agency. HUD housing was built, offering many in the community their first home experience with running water, electricity, a sewer system or washing machine.

From a structural standpoint, the complete removal of nearly all buildings from the floodplain was a clear success. From a cultural and community perspective, feelings about the relocation are mixed.

In Leoso’s view, it was akin to a forced relocation.

“Is finally receiving running water and plumbing at the cost of losing a large part of our culture that we managed to maintain for thousands of years considered success?” she said.

The history of the Bad River Band of Lake Superior Chippewa is one of forced relocations by outside cultures, of burial grounds plundered, and culture and language forced out by religious schools, leaving a legacy of alcoholism, opioid addiction and abuse. Tribal members have often felt they had little say in what happened to them and their children.

To some, the relocation of Odanah off the floodplain in the 1960s is remembered as one more example in a long line of cultural dissolution imposed by white, European culture.

“There’s no comparison between New and Old Odanah,” said Gladys Neveaux while sitting in the Bad River Community Center. “We’re living in a white man’s world. Everyone shared in Old Odanah. We had no refrigerators or freezers, so we’d share venison or a huge walleye. The community was so close and looked out for each other. Now, we’re controlled. That’s what it feels like. You assimilate to carry on. We gave up something to get something.”

Unlike Valmeyer, many people in New Odanah rent rather than own their homes because HUD housing is their primary option.

“It’s really frustrating for the people here,” said Leoso. “In Old Odanah, you built your house, raised your children there, passed it down to your children. Here, because of HUD regulations, that can’t happen.”

And home — not just houses — means so much here. It’s the wild rice fields, the medicinal plants, the venison, the water. Above all, it’s the water.

According to oral history, their ancestors were told through a series of prophecies to move west from the Atlantic coast to the “food that grows on water” to preserve their way of life because a light-skinned race “would come across the great salt water.” Long before European contact, the Lake Superior Chippewa settled where wild rice grows near the south shore of Gichii Gumii, Lake Superior.

For many in the community, rivers are the veins that run through Mother Earth; water has a spirit that provides for the people; floods cleanse, rather than destroy; and rain and thunder are something to behold, not fear.

“I love storms,” said Star Ames in 2018. Her father, Don Ames, was tribal chairman at the time of the relocation. “This year has had some great ones, when you can feel the thunderbirds. The thunderbirds are the ones who bring the thunder. That’s the gift they’re giving us — to clean the Earth, renew and purify.”

Leoso dreams of returning to the old town. She lost her home in the 2016 flood and is saving money to build a house on her grandfather’s property — right beside the water.

“I’ll move back and live in a wigwam if I have to,” Leoso said. “It’s where our people have been for, like, ever. The allotment I’m on is my great, great, great grandfather’s. In this place, on this land, only our ancient ancestors are here. Everyone else’s are buried in Europe or somewhere. Our ancestors are here.”

Managed retreat is not a solution for every town or city. But if considering it, community leaders are wise to learn from those who’ve gone before. History and hydrology are intertwined. From the digital blue dots of satellite imagery to the oral histories of the people, the lessons are there for the taking so long as they are sought and shared.

Such lessons include the need for strong community engagement and input throughout the process, and for the planning to occur well before residents are up to their waists in floodwaters.

“It all comes down to what happens in the week or couple months after a devastating flood,” Pinter said. “Almost every year, rivers somewhere in the U.S. have major floods, levees fail, and towns go underwater. They’re going to say, ‘What are we going to do?’ If you’re unaware of the options, if you’re unaware of the history, the opportunities and challenges, then it’s a random decision. The goal is to create knowledge ahead of time so that, where managed retreat is feasible and beneficial, it’s on the table.”

This story is from UC Davis Magazine. Those wishing to reprint any portion of the magazine’s contents are required to write magazine@ucdavis.edu in advance for permission.