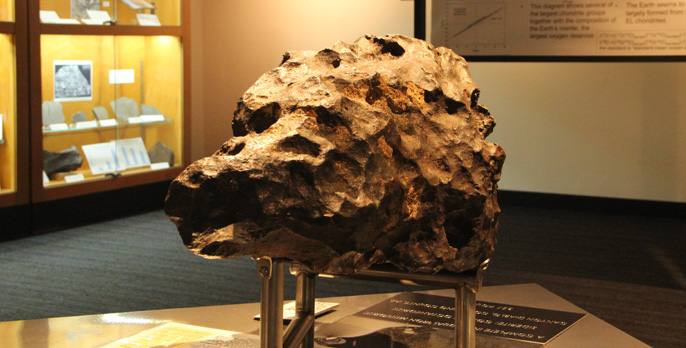 The museum, located in UCLA's Geology Building (Room 3697), is open weekdays from 9 a.m. to 4 p.m. and on some weekend afternoons.

A centerpiece of the museum is a 357-pound iron chunk of an asteroid that crashed into Arizona some 50,000 years ago, creating a mile-wide crater just east of Flagstaff. Visitors are allowed to touch the venerable object, which like most other meteorites and like the Earth itself is 4.5 billion years old, said John Wasson, the gallery's curator and a professor of geochemistry and chemistry in the UCLA College of Letters and Science.

Meteorites are rocks ejected from asteroids, comets, planets or the moon that have traveled through interplanetary space and landed on the Earth's surface. The vast majority come from asteroids.

"Our goal is to make this gallery the world's best scientifically oriented meteorite museum," Wasson said. "Our collection is by far the largest in California and is a gift to the people of Southern California. The opportunity to learn in scientific detail about meteorites has not been available in California before."

The collection houses specimens of nearly 1,500 meteorites that illustrate the scientific processes that were active in the early solar system. About 100 of these — representing a wide variety of meteorite types — are currently on display.

These include chondrites, which contain large numbers of tiny rocky spherules known as "chondrules." The origin of chondrules remains very much a mystery, Wasson said. It appears they were created from clumps of dust in the solar nebula — the gas and dust cloud that existed before planets and asteroids formed — and were "zapped" in a way that is still unknown. The gallery's images of primitive chondritic meteorites taken with a scanning electron microscope offer detailed views of chondrules.

The museum also features backlit samples of a class of beautiful meteorites called pallasites, which contain silicate minerals mixed with metal. These specimens formed at the "interface between the metallic core and the silicate mantle" of an asteroid, Wasson said.

"We have no sample of the core of any of the planets or even a major moon, but many of the iron meteorites are samples of an asteroid's core, and they differ from one another," Wasson said.

Wasson, a member of UCLA’s faculty since 1964, has devoted his scientific career to studying meteorites.

"Meteorites are fragments that were, in part, the building blocks of the planets," he said. "Many of these are the first rocks that formed anywhere in the solar system. They have information about the earliest history of the solar system that we cannot learn from the Earth itself."

One of the gallery's exhibits explains how to correctly identify meteorites. Detailed explanations of the samples are provided in display cases and brochures.

Alan Rubin, the associate curator of the gallery and a researcher in UCLA's Department of Earth, Planetary and Space Sciences, is an expert in identifying meteorites. He receives samples every few days from people who believe they have found meteorites.

"They almost never are real meteorites," he said, adding that "less than 1 percent" actually come from beyond the Earth. Some of these objects mistaken for meteorites — including ordinary rocks, petrified wood and metal slag — are on display in an exhibit aptly titled "meteorwrongs."

"For many years, we've collected beautiful exhibit specimens of meteorites but kept them locked in inaccessible cabinets," Rubin said. "It's great to be able to put them out on display for people to see."

UCLA's collection of meteorites has grown to nearly 3,000 specimens under the stewardship of Wasson and Rubin, and is among the most extensive in the world.

The UCLA Meteorite Gallery's grand opening will be held at 4 p.m. on Jan. 10 and is invitation-only. The event will honor Arlene and Ted Schlazer, who donated more than 60 exhibit-worthy meteorites to UCLA, as well as a bequest for an endowed chair in cosmo-chemistry and meteorite research. UCLA Chancellor Gene Block is scheduled to speak at the opening.

The Meteorite Gallery is supported by UCLA's Department of Earth, Planetary and Space Sciences and Institute for Planets and Exoplanets.