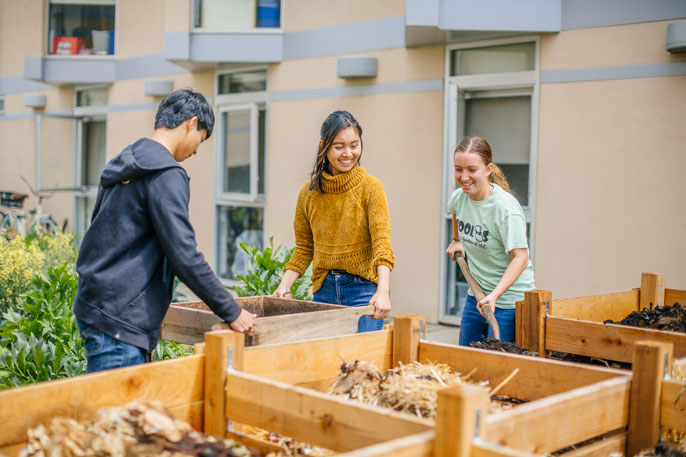 Students work at Ellie's Garden, one of a series of gardens at UC San Diego's Eleanor Roosevelt College.

The University of California now produces more on-site solar energy than any university in the country — drawing enough sun power to light up a small city.

More is on the way, as UC stretches to become the nation’s first large university system to achieve carbon neutrality and move to 100 percent clean electricity over the next six years.

“UC is making big moves to reduce its environmental impact, but you can’t talk about those achievements without talking about how students have helped us get here,” said David Phillips, UC’s associate vice president for energy and sustainability. “Students have led the charge.”

In the late '60s, for example, UC Davis students launched a public bus system, and UC Santa Cruz students started one of the first organic farms. Both efforts went on to become models for other universities.

The goals have become increasingly ambitious over the years. Today, UC is looking to zero-out its carbon footprint, divert 90 percent of its waste from landfills, and use only clean electricity by 2025. You can track its progress in the just-released Annual Report on Sustainable Practices.

Students who get involved in environmental activism during their years on campus often find that their passion for the work opens doors to unexpected professional opportunities, leading to even greater impacts, Phillips said.

Today, students at eight UC campuses support sustainability projects through similar mechanisms. In 2018, those efforts raised $2.2 million for student-led projects, and allowed UC Irvine to become the first university in the nation to convert its full bus fleet to electric buses.

Meanwhile, Logan Green — who as a student became focused on solving the problem of clogged freeways — went on to co-found Lyft. The ride-sharing company pledged last year to make all of its rides carbon neutral.

And the person helping Lyft achieve its promise? UC Berkeley alum Sam Arons, who met Green back in 2006 when Green helped Berkeley and other UC campuses pass their own student fee referenda for green funds.

“Logan and Sam’s passion for sustainability was encouraged and enhanced by their time at UC — and both are still influential today,” Phillips said. “Current student leaders are just as committed to environmental issues. I’m excited to see what we can do together in the coming years.”

Read more in the 2018 Annual Report on Sustainable Practices (PDF).