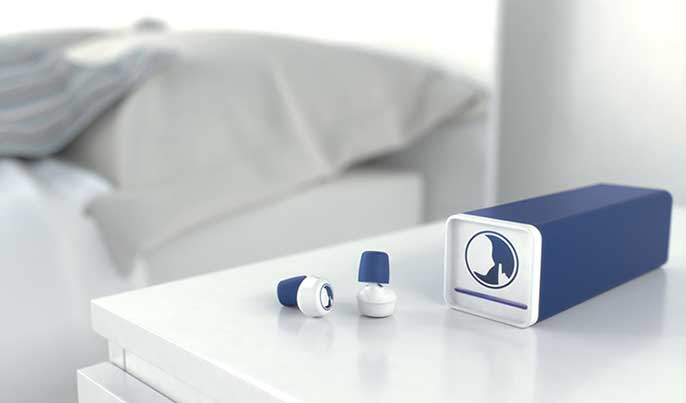 When Daniel Lee enrolled in Nate Delson’s Product Design and Entrepreneurship class at UC San Diego, becoming an entrepreneur wasn’t on his radar. But a little more than a year later, Lee and two other students at the Jacobs School of Engineering already have raised more than $450,000 through crowdfunding for their start-up company, Hush Technology. Their product? Smart wireless earplugs that block out external sounds but still allow users to hear their alarm clock and important messages via a smartphone app.

Lee, a mechanical engineering major, dreamed up the idea for the earplugs — which also double as a sound machine that plays white noise and ocean wave sounds — during Delson’s class. The class also provided him the tools to take his professional destiny in his own hands and start his own company, first at the Moxie Center for Student Entrepreneurship at UC San Diego and then at San Diego’s EvoNexus incubator. The devices will be manufactured here in San Diego.

Lee said he was inspired to develop the earplugs by his years of living in loud campus dorms and apartments shared with roommates. He and three other students built a prototype. When the class ended, the other students dropped out of the project, so Lee drafted his roommate, Daniel Synn, a structural engineering major, to help. A computer engineering student, also named Daniel Lee, but distinguished by his Korean first name, Chesong, joined the pair a few weeks later.

“Yes, our team has three Daniels,” they write on their website. “It's impossible to make sense of group texts and email threads but we like it that way.”

The three engineering students divided up roles fairly quickly. Lee took charge of hardware and product development. He graduated in June 2014 to focus on Hush Technology full time. Chesong Lee focused on developing the app. Synn became the lead designer and chose to take a year off school to focus on the start-up. It took some convincing, but his family finally agreed to allow him to do so. Classes he took at the von Liebig Entrepreneurism Center at the Jacobs School were particularly helpful, he said. “They gave me a lot of vocabulary to talk the talk.”

Finding a need and filling it

During Delson’s class, the students focused on identifying a user need and validated it through direct interactions with potential customers. They also were required to consider whether the technology for the product was feasible and to evaluate its financial viability. The team’s final presentation included a video demonstrating how the product would be used — an outstanding pitch. They received $2,000 from Venture Well and the Moxie Foundation, which supported the class.

“The energy and dedication of the students has been amazing,” Delson said. “I wish them all the luck with Hush, but regardless of the success of the company, I am confident that the real-world lessons they are learning are invaluable.”

The three Daniels also joined the Moxie Center for Student Entrepreneurship, where they received access to workspace, tools, equipment and supplies, including 3-D printing, several machine shops and electronics fabrication. Through the center, they also received mentoring from business professionals, legal assistance on incorporation and patents, and introductions to investors and the EvoNexus incubator.

“The Hush Technology team came into the Moxie Center with an exciting business idea and a passion to make it work,” said center director Jay Kunin. “They took full advantage of our technical and business resources, and I’m particularly proud of how Daniel, Daniel and Daniel have supported their fellow entrepreneurs in the Moxie Center and across UC San Diego. We’re happy for their continued success at EvoNexus and Kickstarter; they’re wonderful representatives of UC San Diego students, and the entrepreneurial support programs on campus.”

The team also got involved in a host of other UC San Diego entrepreneurship programs, including those offered by the Rady School of Management, the von Liebig Center for Entrepreneurism and the BrightEyes mentorship program.

As a result, they were noticed by San Diego’s EvoNexus start-up incubator, where Hush was accepted in May. “We’re the youngest ones here—by far,” Lee said. EvoNexus also provides help with securing high-powered advisors to providing upscale office space.

The team also was a finalist in the UC San Diego Entrepreneur Challenge Tech & Innovation Business Plan competition earlier this year. In June, Hush Technology was named a COOL Company by the San Diego Venture Group, where they claimed a coveted table at SDVG's annual Venture Summit.

During the product development phase, the biggest concern was making the earplugs comfortable. The team tested almost every foam earplug they could find on the market and 3D printed hundreds of housing shapes for their electronics to find the ideal design that would accommodate a broad range of ears. They had volunteers sleep through the night with various prototypes to fine-tune their shape.

Finding a battery that would last 10 hours — hopefully enough sleep for the average undergraduate student — also was a challenge. To prolong battery life, the team decided to use Bluetooth Low Energy and only play back locally stored audio files on the device itself.

Chesong and Synn developed the Hush app with multiple functionalities. It configures a personal alarm clock that users hear via a speaker inside the earplugs. It plays an array of soothing sounds, such as ocean waves and a waterfall, and binaural beats, sounds that help generate relaxation. The app also includes a notification center, which ensures that urgent phone calls from certain pre-selected numbers will come through — even when you’re asleep. The app also features a tracker that will make the earplugs sound so their users can find them.

The earplugs are charged on a charging dock that doubles as a carrying case and includes its own rechargeable batteries. The case is ideal for travel and can charge the earplugs up to 10 hours on a single charge.

The three Daniels already have a number of additional products and features planned out. One of them is already in the research and development phase. They also are looking into retail channels for their smart earplugs.