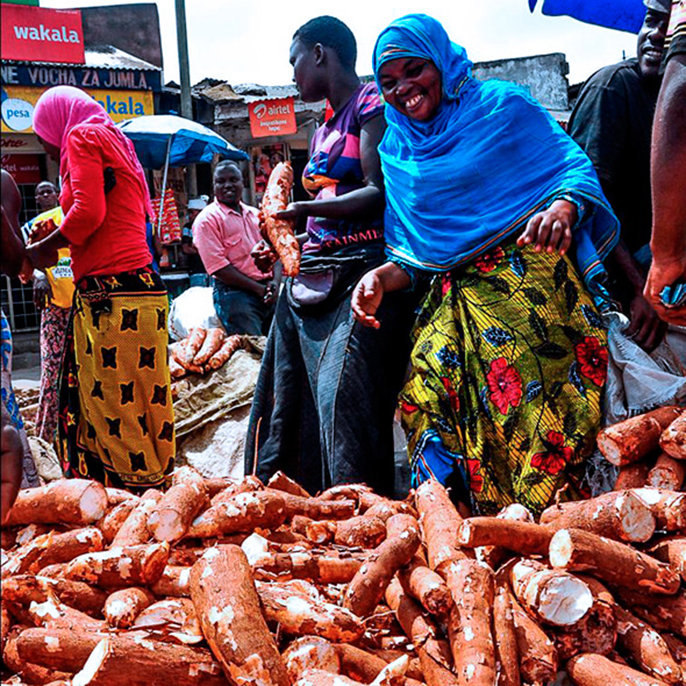 A pile of cassava at an African market. Known as manioc or yuca in South America, it is also the source of tapioca.

A new analysis of the genetic diversity of cassava will help improve strategies for breeding disease resistance and climate tolerance into the root crop, a staple and major source of calories for a billion people worldwide.

In the paper, the team, led by Daniel Rokhsar, a UC Berkeley professor of molecular and cell biology and of physics, compared the cassava reference genome to the genomes of its relatives: the castor bean, rubber tree, Ceara rubber and 53 cultivated and wild cassava varieties from around the world.

They found that the genetic diversity of cassava used in current breeding efforts has been greatly reduced in Africa, where viruses such as the cassava mosaic disease and the cassava brown streak disease have affected crop yields in many countries. They were able to detect the genetic signature of past cassava improvement programs going back to the 1930s, which interbred cassava and Ceara rubber, and the persistence of these Ceara rubber regions in elite cassava varieties suggests they confer desirable traits.

They also mapped out how the many cultivated cassava varieties are related, which can help breeders maximize genetic diversity in improvement programs.

Cassava root is easy to grow and has a high starch content – between 20 and 40 percent by weight – which makes it an ideal source of calories. However, it is particularly vulnerable to plant pathogens, which can significantly reduce crop yields.

The root crop also represents a strategic source of renewable energy — as biomass from which ethanol is being produced for transportation fuels. With the help of genomics, researchers hope to apply advanced breeding strategies that can improve cassava’s resistance to diseases and improve crop yields, Rokhsar said.

The work was funded by the Bill and Melinda Gates Foundation, the U.K. Department for International Development and the NEXTGEN Cassava Breeding project.

For more information, check out the story on the Joint Genome Institute website or the Monash University press release.