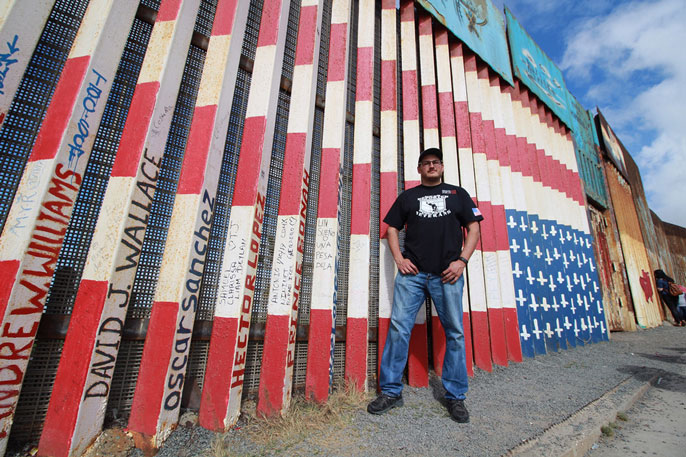 Alfredo Figueroa next to the border wall in Friendship Park, located in the San Diego-Tijuana region. The mural behind him, titled “S.O.S. Deported Vets in Distress” was painted by Amos Gregory in 2013 and features names of veterans who been deported around the world. The upside-down flag is recognized among military personnel as a dire distress signal. Families that have been separated will meet in the park and communicate through the wall.

Just south of the California border in Tijuana, a small building is a makeshift home to a small community of men, Mexican citizens who called the United States home but were deported even after serving time in the U.S. military.

It’s formally called the Deported Veterans Support House, but most simply call it the Bunker. Its residents lived legally in the U.S. until they ran afoul of the law and were sent back across the border, their service notwithstanding.

And it’s a place where Alfredo Figueroa, who graduates this week from UC Berkeley and himself is an Army veteran, sees that he can make a difference. He has visited the Bunker twice, and saw himself in the men who live there. Now, as the recipient of the Judith Lee Stronach Prize, he plans to use his $25,000 award to support veterans in exile.

Figueroa grew up in San Francisco’s Mission district. The oldest of three, his childhood was checkered with trouble, something that constantly worried his parents, who came to the U.S. when civil war rocked El Salvador in the 1980s. Poor and not well served by his school, Figueroa fell in with the wrong crowd. By 17, he had two felonies and three misdemeanors on his record and had been incarcerated twice.

“As a Latino male growing up, I felt like I was very quickly labeled to be a certain way or to be a specific thing. Almost all of the time that was negative,” says Figueroa. “You keep telling this Latino youth that he’s a gangbanger, he’s a good-for-nothing, he’s never going to amount to anything — eventually it felt like a self-fulfilling prophecy.”

His imprisonment took a toll on his parents, who placed him in private school to ensure that he would graduate. Even with a high school diploma in hand, he couldn’t be convinced to consider going to college.

“At the end of the day,” he reflects, “I didn’t see an investment in educating myself at the time because it didn’t speak to me. But I remember my parents asking themselves, ‘What are we going to do with our firstborn? He’s finally not in jail anymore. He’s not doing drugs. He’s not gangbanging anymore. What do we do with him?’”

His mother offered to let him take over a branch of the family check-cashing and wire-transfer business. But Figueroa had other plans: military service.

Enlisting, he thought, would elevate him from his past. It would be a proving ground where he would leave his missteps behind and demonstrate his honor and integrity — not to mention a promise from the Army that his criminal record would be expunged if he served honorably. As an infantryman, Figueroa operated a machine gun and saw action in Iraq and Afghanistan. He joined the Army seeking clarity and purpose, but returned feeling more torn apart than ever.’

“When I think back to my service, I think I was desperate to do something with my life. I wanted to get out of the environment I was in,” he says. “But the military didn’t accomplish everything I wanted it to. I realized that people will still only see me in a positive light as long as I’m doing what they want me to do.”

Back home after three tours, Figueroa struggled with PTSD. Combat had exposed him to new set of traumas he wasn’t yet ready to confront. He continued to resist his parents’ pleas to go to college. Instead, he worked as an auto mechanic, slowly processing his experiences as a soldier while living hand to mouth. A turning point came when he saw the pride that a co-worker felt after his daughter was accepted to UC Santa Cruz.

‘I had to hear it from someone else’

“Don Jose,” remembers Figueroa. “He was an older guy from Mexico and he was so happy when his daughter got into school. He said to me, ‘She’s never going to have to break her back the way I do. She’s going to get more.’”

“It hit home, because that’s my parents’ story,” he says. “I just didn’t listen until I heard it from someone else.”

In Figueroa’s words, the next few years were spent “getting with the program.” Newly dedicated to playing by the rules, he vowed to educate himself so he could be of service to his community. He spent three years at Chabot Community College before transferring into the Haas School of Business at Berkeley. En route, he won the Kruttschnitt Aspire Scholarship, which supports low-income, underrepresented minority students. In 2017, he reflected on what the scholarship — and feeling accepted — meant to him.

Berkeley proved a challenge. For three semesters, Figueroa tried to work full-time and carry a full course load. After failing classes in his third semester, he quit his job to focus on his school work. To support himself, he worked as a peer adviser at the Cal Veterans Services Center.

‘I didn’t believe it at first’

Last year, as part of a DeCal class focused on educating students about immigration policy, Figueroa found himself in Arizona working with communities affected by immigration laws. It was during this Alternative Break that he learned about the community of deported veterans in Tijuana.

“I didn’t believe it at first,” says Figueroa, initially thinking he had sniffed out a con. “A bunch of guys pretending to be veterans to scam people for money,” he says. But he dug in, and research connected him with Hector Barajas, a deported veteran running the Bunker in Tijuana.

“I just felt this need to help,” says Figueroa. “If all of this was true, and Hector was living down there and working with other veterans, I needed to figure out how I could get involved.”

Figueroa visited the Bunker twice, delivering supplies and money that had been donated – mostly from the Cal Veterans on campus. The Bunker is a relatively small space that temporarily houses recently deported veterans. While there, they can draw from a cache of donated items — things like razors, deodorant and toothpaste — and get help filing for their V.A. benefits. It’s also a place of community and camaraderie.

“Hector would provide housing for them for three or four months while they got back on their feet,” explains Figueroa. “I’ve personally met around 30 veterans in my two trips down there.” He says Barajas hears from people who have been deported to different parts and has a database of about 300 names.

The ACLU of California estimates that there are more than 200 deported veterans in more than 30 countries.

Ever since his first visit, Figueroa has been moved to raise awareness of the deportees. Over Presidents Day in February, he and other Cal Vets traveled to Tijuana to deliver supplies and visit with those in the Bunker. Their efforts earned the Cal Veterans group the UC Berkeley Chancellor’s Award for Public Service in civic engagement earlier this month.

“It was an instance where the Cal Veteran community really rallied around the idea of supporting these people,” says Ron Williams, director of re-entry student and veteran services.

‘They sacrificed so much’

Now Figueroa has made supporting this community a top priority.

“We can’t control if someone is going to get into trouble or not,” he says, “but if they do and they pay their debt to society, they still deserve the help they’re entitled to.”

As someone who has felt out of place and devalued by society for much his life and is also a veteran, Figueroa feels the plight of the deported veterans as a deeply personal injustice. He relates to the sacrifices they made to serve their adopted country.

Along with delivering supplies, Figueroa, with Barajas’ permission, has launched a GoFundMe page to raise money for the deported veterans. He knows his efforts are stopgaps rather than a permanent solution. Longterm, he wants to raise public pressure and lobby politicians for legislative support and immigration reform. He advocates naturalization for all foreign nationals who serve in the U.S. military.

“The fact that veterans are being deported signals that our immigration system is not perfect,” he says. “The U.S. government should work towards creating a comprehensive and realistic immigration process.”

Figueroa hopes to establish partnerships with allies in California and around the nation. Motivated by the experience he and the Cal Vet group had in Tijuana, and with a degree in business administration from Haas in hand, he’s reaching out to other veterans’ groups on college campuses for support. Down the road he’d like to create a 501(c)(3) to continue his efforts, but for now, thanks to the Stronach prize money, Figueroa figures he has enough funding for his work for the next year.

Williams believes that Figueroa is well-suited to the task.

“When there’s danger, when there’s an issue or problem, he runs towards the fire,” Williams adds. “But he doesn’t run towards it with aggression. He’s running toward the problem leading with his heart.”

“This is my community,” says Figueroa. “These are my brothers and sisters from the military, and this is a topic that affects my community as a Latinx person. I know that supporting deported veterans is something that is going to be a huge part of the lives of people in historically underserved neighborhoods, of people in my community. This is my life’s work.”