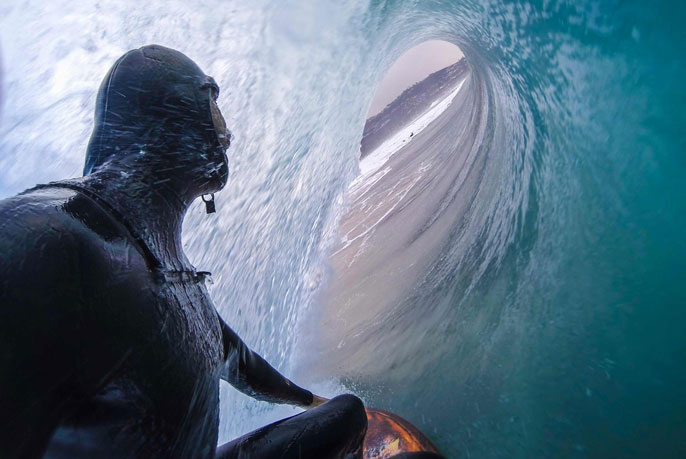 Surfer, ocean steward and chemistry doctoral student Cliff Kapono begins his worldwide expedition this fall to discover if surfers have a unique microbiome, and if so, how these marine bacteria and chemicals impact human health.

Surfers have a very intimate connection to the ocean. Their skin is bathed in the rushing tide, and crashing waves send salty seawater into their ears, eyes and throat. Inside and out, they are saturated with diverse molecules and bacteria to which the average person is not exposed. This prompts the question: How do these unique bacteria and chemicals impact human health? Cliff Kapono, UC San Diego chemistry doctoral student, is embarking on a worldwide quest to find out.

A native of the Big Island of Hawaii, Kapono is passionate about his heritage and promoting the well-being of people and our planet. As a scientist, he seeks to tap into the microscopic world of bacteria, fungi, viruses and other microbes. These microbiomes, or communities of microorganisms and their gene products, live in our bodies and on our skin and pervade much of the world around us. And scientists are just beginning to discover their impact on human and environmental health.

This fall, Kapono sets off on a nine-month expedition, called the Surfer Biome Project, to collect hundreds of chemical samples from surfers across five continents. He begins his trip in England, where he will partner with researchers from the Center for Environment and Human Health at the University of Exeter School of Medicine. He will also recruit volunteers to help him collect samples by reaching out to local non-profit organizations such as Surfers Against Sewage, a group that works to reduce pollution and waste in bathing waters across the United Kingdom.

Later in the year, he will make his way to the rugged coasts of Ireland, Spain and Morocco. In the winter, he will migrate back to the familiar breaks of California and Hawaii. By the spring, he will fly south to Chile, and then travel across the Pacific to Indonesia at the start of summer.

“Do surfers in California differ on a molecular level from surfers in Spain?” asked Kapono. “If surfers have a unique microbiome or body chemistry, this could begin to facilitate new types of conversations about the ocean as a therapy, and as a result inspire conservation efforts to protect this valuable resource.”

Science from the heart

A driving force behind Kapono’s academic career is a desire to reconcile traditional ecological knowledge with western science. Infused with a body of ancestral wisdom passed down for generations about the Earth and environment, his goal is to build a complementary foundation of scientific expertise from a different perspective.

Through the UC San Diego Program for Interdisciplinary Environmental Research (PIER), Kopano works jointly with Pieter Dorrestein, a professor in the Skaggs School of Pharmacy and Pharmaceutical Sciences, and researchers at the Scripps Institution of Oceanography. His first studies involved mapping molecules made by bacteria on coral surfaces in three dimension to determine reef health.

“The best part about attending graduate school at UC San Diego is I don’t have to choose between being a chemist or a marine biologist or coral researcher,” said Kapono. “I can tackle these questions from a multidisciplinary perspective.”

The Surfer Biome Project evolved out of Kapono’s love for the ocean combined with the advancement of new methods that can reveal what types of molecules and bacteria live on human skin. In a recent study led by the Dorrestein lab, researchers found molecular remnants of personal hygiene products—such as soap, sunscreen and body lotion—on a person’s skin several days after they had supposedly been washed off. This study demonstrates that our behaviors and the external environment contribute to our skin’s chemical composition.

Kapono will use the same type of analysis to investigate whether being immersed in a sea of marine bacteria greatly alters the microbial community of surfers, and whether certain molecules are unique to different parts of the world.

The project—which was originally intended to be a small survey of local surfers—transformed into a global-scale endeavor with the help of a research grant provided by the UC San Diego Global Health Institute. Kapono was one of two doctoral candidates in the UC San Diego School of Medicine’s Global Health track awarded $80,000 to jumpstart his project. Funding for the grants was made possible as the result of an investment in the Global Health Institute from Chancellor Pradeep K. Khosla, complemented by funds from Vice Chancellor of Health and Dean of the School of Medicine David Brenner.

Growing the microbiome tree of life

So what does it take to begin drafting a map of the surfer microbiome? The sampling process itself is straightforward. Kapono will meet up with local surfers and provide them with an American Gut Project sampling kit, which they will use to swab the surfaces of their skin, mouths, eyes, noses and ears within two hours of their last wave. Participants will also be asked to provide a fecal sample, and will take a survey to identify their general health status and demographic attributes as well as characteristics of the location(s) in which they surf.

Though traveling solo, Kapono is confident that the international surfing community will embrace his initiative. “The surfing population is pretty close-knit,” he said. “It will not be difficult to find a spot where the waves are good and communicate that this is something that could potentially protect the ocean.”

Once he returns with the data, Kapono will use gene sequencing to analyze the bacteria and mass spectrometry to view the size, structure and properties of the molecules. This information will be part of the American Gut Project, the world’s largest crowdsourced citizen science project, which is based out of Professor Rob Knight’s lab at the UC San Diego School of Medicine. By comparing his samples to others collected by the American Gut Project, Kapono hopes to determine whether or not microbiomes vary among surfers across the globe—an initial step in gaining knowledge about how the ocean influences our well-being.

“It’s not just about the human anymore—it’s about the different microbes, the bacteria, the fungi, the viruses, and how they all influence our healthy state of being,” explained Kapono. “We now have technology to read samples rapidly, giving us insights that help build our understanding. As we approach an age of personalized medicine, it will be common for everyone to have their microbiomes checked.”

Just as the American Gut Project is supported by thousands of people who volunteer to have their microbiomes sequenced, Kapono hopes that the Surfer Biome Project will become self-sustaining.

“This first sample, we want to be able to show informative and valuable trends,” said Kapono. “The following year, we want to provide the opportunity for citizen science. For a low price, surfers can send in a sample and be able to see how they compare across the world and contribute to the overall understanding of how humans are affected by the environment.”

The art of communicating science

When he isn’t hitting the surf for science, Kapono is out catching waves as a way to connect with nature and his Hawaiian roots. He explains that the thousand-year-old practice is much more than a pastime, it’s a meaningful way to acknowledge our interrelationship with the sea.

“In Hawaii, surfing isn’t just about riding a wave, it’s about understanding the ocean, being in balance with it, and expressing gratitude,” explained Kapono.

Also important to his culture is story telling. He often brings a camera along on his adventures, giving viewers a firsthand look as he glides through the curl of a wave, or treks through the foggy rainforests of the Hawaiian Islands. Many of his films are produced with a goal of sharing his research findings with diverse audiences. Kapono believes science becomes stronger when more people are invited to the dialogue.

“I think it’s important for someone who doesn’t consider themselves a scientist to be able to participate in the conversation, because it affects everyone,” said Kapono. “Ocean acidification doesn’t just affect marine biologists. Antibiotic resistance doesn’t just affect medical doctors. Everyone should be involved so we can begin to mitigate the detriment to society together.”