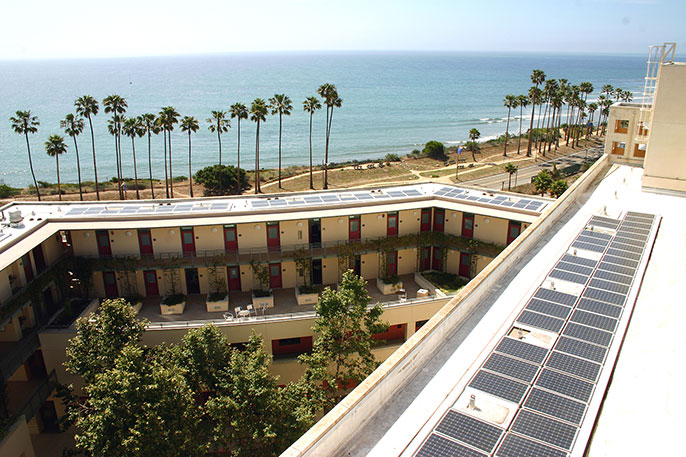 The California Higher Education Sustainability Conference got started at UC Santa Barbara's Bren Hall, one of the country's greenest buildings.

As the state grapples with climate change and drought, “Creating Our Future Today” is an appropriate theme for this year’s California Higher Education Sustainability Conference.

“We’re bringing the community together to create new solutions for the future while acknowledging the urgency of what is going on today,” said Katie Maynard, event manager for the conference, which is being hosted by the Associated Students of San Diego State University from June 16-20.

The conference  provides a venue for sharing best practices in sustainability for attendees from the University of California, California State University, California Community Colleges and private universities from throughout the state.

The gathering got its start in 2002, when 100 people from across the UC system toured UC Santa Barbara's Bren Hall — the nation's first building to achieve a LEED "Double Platinum" sustainability rating from the U.S. Green Building Council. That initial event has evolved into an annual conference that draws up to 1,000 participants from throughout the state’s higher education community.

Sustainability has long been a priority for UC, and recent initiatives from President Janet Napolitano have sharpened that focus. She has set goals for the UC system to become carbon neutral by 2025 and to reduce per-capita potable water use by 20 percent by 2020.

“The presidential initiatives have given new energy to the campuses,” said Maynard, who is also the sustainability coordinator for UC Santa Barbara. “Everyone is very inspired and very challenged on how to achieve these massive goals.”

Napolitano has formed a Global Climate Leadership Council to advise UC on how to become carbon neutral, which means reducing net greenhouse gas emissions to zero. UC has been working toward carbon neutrality as part of its sustainable practices policy since 2007 but there had been no timeline for achieving it. Napolitano has asked campuses to go further by setting a 2025 deadline.

Water management is a new addition to the UC sustainability policy, and the conference offers a venue for campuses at different stages of implementation to exchange ideas, Maynard said.

“The conference is great for both those who have done it and those still working on it to share those perspectives,” she said.

Climate action and water are two of the major topics at the conference, which will include: