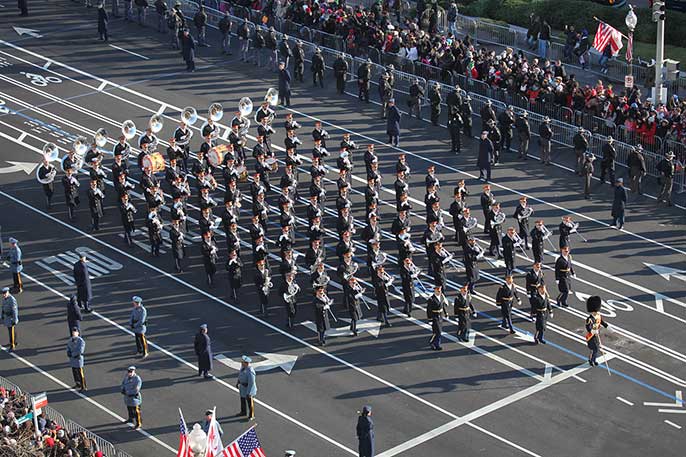 UCLA researchers theorize that humans have evolved to view the act of moving in unison as a marker of a group’s strength.

In the aftermath of the Aug. 9 shooting of an 18-year-old African American man by a white police officer in Ferguson, Missouri, much of the nation’s attention has been focused on how law enforcement’s use of military gear might have inflamed tensions.

But what if the simple act of marching in unison — as riot police routinely do — increases the likelihood that law enforcement will use excessive force in policing protests?

That’s the suggestion of a new study by a pair of UCLA social scientists.

“We have found that when men are walking in step with other men, they think that a potential foe is smaller and less physically formidable and less intimidating than when they’re just walking in no particularly coordinated manner with other men,” said lead author Daniel Fessler, a professor of anthropology in the UCLA College. “That calculation appears to make men who march with other men feel less vulnerable and more powerful and their potential foe more easily vanquished. We theorize that it also makes them more likely to use violence than they otherwise would be.”

Study co-author Colin Holbrook said media coverage of Ferguson frequently showed police slowly advancing in lockstep on protesters who were standing with their hands up. “Not only can it be quite intimidating to see a group marching in unison, but we’ve also found — and past research supports — that the mere act of moving in sync also makes those in formation feel more formidable and therefore potentially more likely to be aggressive.”

For the strikingly simple experiment, Fessler and Holbrook recruited 96 undergraduate men, pairing each with an experimenter who posed as a fellow recruit. Half the participants were instructed to walk in unison with their partners. The other half were asked just to accompany their partners, but without walking in lockstep. Participants were not allowed to talk to each other, and all followed the same 800-foot route, outside of UCLA’s Pauley Pavilion.

Afterward, each participant was given a range of tests, most of them to disguise the real purpose of the study. Ultimately, each study subject was shown a photograph showing a man’s face with an angry expression. Based on that information alone, subjects were asked to estimate the man’s height in feet and inches and then asked to guess his size by choosing images from two different charts, each showing six silhouettes. On one chart, each image was progressively taller and bigger; on the other, each appeared progressively more muscular.

Even though each participant was accompanied only by a single companion, those who walked in unison with their partners judged the angry man as significantly less physically imposing than did the study subjects who had not walked in unison with their confederate: On average, they estimated that the man in the photo was about an inch shorter than the other participants did. Although the researchers noted the difference was relatively small, they said the strength of the finding was so strong that the chance of it being a fluke was 1 in 100.

The researchers said the effect would likely have been even stronger had the study more closely approximated the conditions of police and military training.

“If we had more people marching together, and if they had marched together repeatedly like police and the military do in drills, we would have expected a stronger effect,” said Holbrook, a postdoctoral fellow at UCLA’s Center for Behavior, Evolution and Culture.

The researchers theorize that humans have evolved to view the act of moving in unison as a marker of a group’s strength. Further, the perception pertains to both observers, especially potential adversaries, and to those moving together in formation.

“The ability to move in unison indicates that one is part of an effective fighting alliance,” said Fessler, who also is director of the Center for Behavior, Evolution and Culture. “That’s no accident. In order for individuals to be synchronized, they have to be motivated to coordinate their behavior — they have to be paying attention to what one another are doing, and they have to be skilled and competent. A deep part of our brain registers this connection.”

The connection may help explain the continued use of military parades and drills at a time when armed forces increasingly rely on air strikes, the researchers contend. Marching band performances at sporting events and fans spontaneously breaking into the “wave” at stadiums also communicate — albeit unconsciously — that the participants are part of a powerful and intimidating coalition.

Research has found that marching in unison might actually make people more likely to be aggressive. In a 2012 study conducted by a University of Southern California professor, subjects who had walked in sync with another person were more likely to take actions that they thought would result in the death of sow bugs than those who walked together in no particular pattern.

In many species, natural selection appears to favor animals most skilled at moving in unison. In research published this year, for example, researchers at Florida Atlantic University found that dolphins traveling in tightly coordinated groups are more likely to win fights with other dolphins than those in groups that swim and breach in unison less often.

Fessler’s and Holbrook’s latest findings build on more than 30 studies they have conducted into unconscious assumptions people make when they assess the risk posed by another in a potentially dangerous situation. With funding from the Air Force Office of Scientific Research, the researchers have found that people appear to compute the risk posed by a potential adversary by arriving at a quick mental picture of the size of the potential assailant, regardless of whether the foe’s size is germane to the risk.

For instance, Fessler and Holbrook have found that a foe’s envisioned size and muscularity is influenced by his access to weapons, propensity to take risks and — in a study conducted immediately following the death of Osama bin Laden — the success or failure of his leader. They’ve also found that when men are in groups they tend to reduce the envisioned size and strength of a potential foe.

“Experiencing moving in unison with another person appears to make us paint a less threatening picture of a potential assailant,” Fessler said. “They loom less large and formidable in the mind’s eye. Simply walking in sync may make men more likely to think, ‘Yeah, we could take that guy!’”