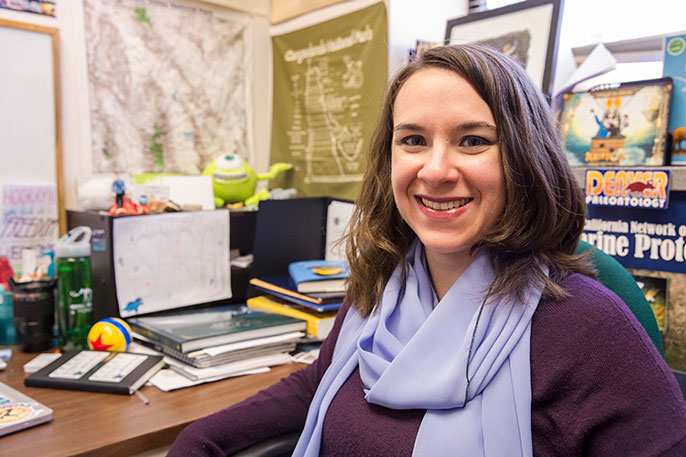 Sara ElShafie used to struggle to explain her research to her family in a meaningful way. A UC Berkeley graduate student in integrative biology with an emphasis on how climate change affects animals over time, she says she “would always get lost in the details, and it was not doing justice to what is so amazing about natural history.”

But she doesn’t have that challenge anymore. Today, 28-year-old ElShafie is one of the few people in the country who focus on adapting storytelling strategies from the film industry to science communication. For the past year and a half, she has been leading workshops for scientists — primarily graduate students — on how to tell stories about their research that resonate with a broader audience.

ElShafie found her storytelling solution at Pixar Animation Studios, in Emeryville. A Pixar fan her entire life, she emailed the company’s outreach department in 2015 and asked if anyone there would like to talk with students at the UC Museum of Paleontology about how to adapt strategies for filmmaking to communicating science to people outside the scientific community.

“I just thought, ‘Why not?’” she says. “Communication skills require training, just like any other skills. Good communication requires good storytelling. Maybe we can learn from professional storytellers.”

To her surprise, two story artists at Pixar were interested and volunteered their time for the project. They collaborated with ElShafie to present a pilot seminar at the museum that attracted not only students, but faculty and staff. Seeing the project’s potential, ElShafie worked over the following year to develop a series of workshops inspired by Pixar. Last March, together with a Pixar collaborator, ElShafie presented the first public workshop on the Berkeley campus. Although the studio is not formally involved, additional artists at Pixar have been generously contributing their time and feedback.

Drawing on examples from Pixar films and scientific studies, the workshops illustrate storytelling strategies that make science accessible by reframing research into a story with characters, obstacles and revelations. According to ElShafie, these techniques help to overcome scientists’ difficulty with communicating science about non-human subjects. Pixar films — often about animals — are great models, she adds, because they have compelling themes and emotional depth and appeal to a broad audience.

In her workshops with scientists, ElShafie leads by example, turning her research on fossil lizards into a story about how the conflict of climate change affects animal characters over time. “Lizards alone aren’t going to be that interesting to most audiences,” ElShafie says, “but thinking about time, space and their connection with a major societal problem is.”

ElShafie’s workshops not only help participants frame a message, but develop a conceptual framework for introducing scientific topics in the form of a story. With a worksheet she’s created to illustrate the parallel between filmmaking and science, participants leave the workshop having made an outline of a story about their own research. Extended workshops also explore how to use the visual language of animated films in scientific presentations.

“She’s really enlightened the whole museum community on ways we can strengthen our own writing by applying storytelling techniques,” says Lisa White, assistant director of education and public programs at the UC Museum of Paleontology. White says she watched how ElShafie polished and perfected her workshop over the past school year and how the audience grew threefold, to nearly 200 people at workshops this spring.

ElShafie offered her first official workshop, “Science Through Story: Strategies to Engage Any Audience,” in November 2016 at the annual meeting of the Western Society of Naturalists in Monterey. It was a hit, and she started to receive invitations to present it at other institutions around the state and country.

Mallory Rice, a UC Santa Barbara graduate student who attended the Monterey workshop, invited ElShafie to present the workshop at her campus in April. “It was great to see the example of how she turned her own questions and research into a story, rather than thinking about (just presenting) it to the public with results and data,” Rice says.

ElShafie hopes to hold the workshop annually at Berkeley.

Upon arriving at Berkeley as a Ph.D. student in 2014, ElShafie knew she wanted a career in informal education leadership and eventually to become director of a major science museum. To achieve this, she sought scientific training as well as experience in communications and outreach.

As an undergraduate at the University of Chicago, ElShafie had been involved in Project Exploration, a Chicago nonprofit that makes science accessible to underrepresented groups. One of its programs brought students from the inner city to campus for a weeklong intensive summer course. She remembered how the students were overwhelmed at the beginning, but completely transformed by the end of the week, confident and dying to share with others what they had learned.

“That’s when I realized science is not just about learning science, but about discovering your potential and learning about the world around you,” ElShafie says.

ElShafie chose Berkeley for her doctoral program because it could offer her training in both scientific research and informal education, and was especially drawn to the UC Museum of Paleontology, with its emphasis on outreach and public service. She got involved in the museum’s educational programming, giving tours to school groups and assisting with Cal Day activities. Her lecture at Cal Day 2017, “Real-World Fantastic Beasts and Where To Find Them,” was another opportunity for her to apply her skills in explaining science to the public.

“Museums are often the first opportunity for young people to experience hands-on science,” White says, “and for Ph.D. students, a museum career is particularly rewarding, because you not only do research, but also share your specialty as well as the importance of science broadly with the public.”

For ElShafie, balancing science communication workshops with her dissertation research has not been easy. But she spends whatever spare time she has on this passion project and is running workshops across the country. She has given six workshops in the past year and has four more coming up, including one in June at the Smithsonian National Museum of Natural History.

She says, “I enjoy it immensely and have learned a ton — how to put materials together in a cohesive way; how to articulate a vision for a new initiative and get other people on board; how to create a niche for yourself by looking at what everyone else has done, what’s missing, and coming up with novel ideas to address a need.”

Job-seekers with communications expertise are in high demand in areas such as interaction with policy-makers and data visualization for scientists, says ElShafie.

“It has never been more critical for scientists to be able to explain science to the public effectively, and the backbone of all communication is a story,” ElShafie says. “Story training benefits scientists, because it helps us to communicate it in a clear and compelling way to any audience.”

She says the story also humanizes the storyteller, which can help with the misconception that scientists have their own agenda or are out of touch. “Storytelling is an introspective process,” says ElShafie. “It helps scientists to articulate their professional motivations, about why they become scientists, why they choose their particular field and why it is important.”

For ElShafie, paleontology is “the perfect gateway to other sciences” and also involves art and imagination. She enjoys the feeling of holding the evidence — like a fossil — in her hand, imagining the animals and their past lives, and then bringing them to life for other people.

“I learned that there are many parallels between the creative process of filmmakers and of scientists,” ElShafie says, adding that stepping outside one’s profession and looking at it from another lens, for a fresh perspective, is always valuable.