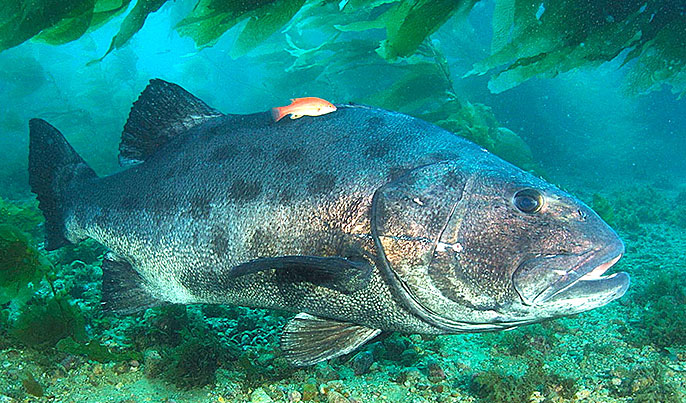 The UC Santa Barbara researchers, together with Larry Allen’s lab at California State University Northridge, have formed the Giant Sea Bass Collective, which has a Facebook page and a Twitter feed (@GSBCollective). For divers and snorkelers interested in participating in the Great Giant Sea Bass Count, more detailed instructions can be found on Facebook.

Fished nearly to extinction in the recent past, giant sea bass are starting to make a comeback. But no one really knows the size of the population. So UC Santa Barbara researchers are asking recreational divers to report sightings of giant sea bass up and down the California coast during a week when the fish are likely to be in shallow water. The Great Giant Sea Bass Count will take place Aug. 1-7.

“What’s nice about this is that people can dive or snorkel anywhere — reefs, wrecks, shallow water, harbors — and for any duration, five minutes or an hour,” said Milton Love, an associate research biologist with UC Santa Barbara's Marine Science Institute and author of “Certainly More Than You Want to Know About the Fishes of the Pacific Coast.” He is organizing the sea bass count with Douglas McCauley, an assistant professor in the Department of Ecology, Evolution and Marine Biology.

“We want to know how many giant sea bass each diver sees, even if that number is zero; everything else is just gravy,” Love added. “If they report the depth, the habitat or how big the fish were, that’s great. The only real caveat is: Try not to count the same fish twice. So that makes it relatively easy for anybody to do it.”

“We are hoping that this will act like an underwater version of the famous Aududon Society Christmas Bird Count, where reporting by citizen naturalists has helped scientists learn a great deal about the abundance and distribution of bird species,” McCauley explained. “So little is known about this rare but ecologically important fish species that we stand to learn a great deal from reporting efforts like this.”

These Pacific giants (Stereolepis gigas) usually range from Mexican waters to Point Conception in the north, although they are occasionally seen on the Central Coast. Their northernmost limit is Northern California but, Love notes, they are rarely found beyond Point Conception.

Giant sea bass, sometimes called black sea bass, were heavily fished around Catalina Island in the 1890s. The juveniles look entirely different from the adults, which can grow to upward of 600 pounds and five or six feet in length. Love said there is speculation that even larger specimens exist, but because the species was overfished no one really knows how big they can get.

Recreational anglers are not permitted to fish for giant sea bass. If one is caught by accident, it must be released. Commercial fishermen are not allowed to target them but can retain a small bycatch (fish caught unintentionally while catching a target species).

“The best case is we just get an awful lot of people covering an awful lot of territory during this time, and if that is the case, then the number we come up with is likely to be reasonable,” Love explained. “There is no metric for if it is reasonable or not. Part of the metric would be to do this year after year after year in order to see trends; that tells you something.”