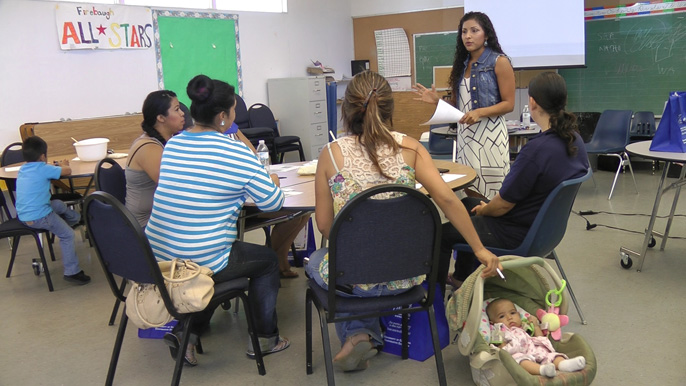 The water study is part of a five-year project investigating whether community-based intervention can help prevent childhood obesity.

Having established a link between obesity and sugary beverages, doctors and nutritionists recommend that children instead drink plain tap water. In virtually all of the United States and California, tap water is the best drink available for good health.

However, a team of UC Cooperative Extension and UC Davis scientists have found that low-quality tap water in some rural immigrant communities could be an obstacle to making this healthy dietary change.

The study was conducted in conjunction with a five-year research and outreach project underway in Firebaugh and San Joaquin, small communities in the San Joaquin Valley with high Mexican-American populations. The researchers are investigating whether a community-based intervention — involving nutrition education, a monthly voucher of $25 to purchase fruit and vegetables, and a physical activity program – can help prevent childhood obesity in Californians of Mexican descent living in low-income rural communities. UC Agriculture and Natural Resources and UC Davis were recipients of a $4.8 million National Institute for Food and Agriculture grant to carry out this research.

Twenty-seven mothers in the study shared with the researchers whether they use tap water and gave their perceptions of tap water quality. In addition, the researchers assessed local water quality by the frequency of violations reported by Cal EPA and contaminant-level data from the California Department of Public Health.

All 27 mothers said they avoid drinking tap water due to unpleasant taste, dirty or yellow appearance, excessive iron or general “contamination.” Most of the women rely instead on bottled and, to a lesser extent, home filtered water for drinking and cooking.

“This cost is an extra burden for these families, many of whom have limited incomes,” said Lucia Kaiser, UC Cooperative Extension specialist in the Department of Nutrition at UC Davis.

The mothers shared in interviews that at least 38 percent of their children aged 3 to 8 years old drank sugar-sweetened beverages – such as soda, energy drinks, powered drink mixes or fruit punch – more than two or three times per week.

“The children may be drinking sugar-sweetened beverages so frequently because of real or perceived low quality of water coming from their taps,” Kaiser said. “I'm not surprised. One time I was in our Firebaugh office and turned on the tap and the water came out brown. “

Two state-regulated water systems serve the majority of people in Firebaugh and San Joaquin. The rest rely on at least 11 small public or private systems. All of the 13 systems have had monitoring violations in the last 12 years. Two have had reporting violations, indicating that they either did not test for contaminants or did not report their findings.

The mothers' perception that tap water was unappealing or contaminated was confirmed when the researchers took a close look at regulatory analyses reports from previous years. There were low-levels of arsenic detected, which fell above the benchmark for safe drinking water in the U.S. The analyses also detected high levels of manganese and iron, which are considered secondary contaminants and do not have enforceable limits set by the EPA. However, the World Health Organization has set health benchmarks for manganese, which were exceeded in some samples.

“The neurotoxic effects of manganese and chronic exposure to low levels of arsenic warrant further study,” Kaiser said. “Even if it's not dangerous, the high level of manganese and iron can give the water an off taste.”

Regardless, removing the contaminants may not matter if perceptions and drinkability are not improved. A possible solution is better communication.

“A simple step could be sending easy-to-understand water quality reports to all residents,” Kaiser said. “Sending reports to renters in addition to property owners and in Spanish as well as English will help raise awareness about the safety of local tap water.”

In the policy brief, the authors included some additional suggestions to address the issue: