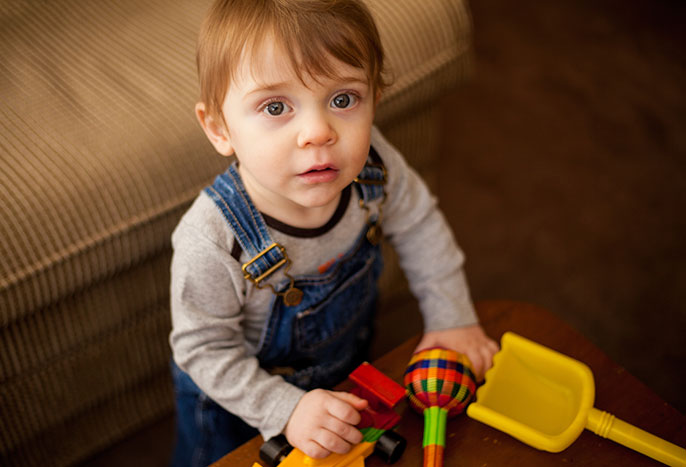 Toddlers are aware of attempts at deception before they can speak well.

In its most positive form, deception — when used in moderation — can be critical to maintaining social relationships. The ability to recognize and use deception is considered point of demarcation in a young person’s growth and maturation.

UC Merced Professor Rose Scott, a developmental psychologist, has found that even children under the age of 2 are capable of recognizing simple acts of deception by adults. In a paper published online recently in the journal Cognitive Psychology, Scott counters the belief that children do not develop such capacity until their early school years.

Testing the understanding of children too young to speak — around the age of 1½, in Scott’s experiment — requires measuring how long they look at things, she said.

“They’re interested in the world around them; when they encounter things they don’t understand, they’ll pay extra attention to try [to] make sense of what’s going on,” she said. “We design situations that are either consistent or inconsistent with our expectations as adults — if they look longer at a situation, it means they found something unexpected.”

The researchers set up multiple experiments in which the child would watch one adult attempting to deceive another. For example, one person would act as the owner of a rattling toy. When that person leaves the room, the other swaps the rattling toy with a visually identical one that does not rattle.

In other experiments, the “thief” would replace the rattling toy with one that looked very different — a poor act of deception, and recognized as such by the child.

“The children were surprised by that,” Scott said. “They looked longer at situations that adults would perceive as bad deception.

“We ran three different experiments. In each case, the infant’s reaction was consistent with what you’d expect using an adult understanding of deception.”

While infants are far too young to perform acts of deception themselves, the fact that they can understand such actions in others is significant, Scott said. It’s important for their social development — learning to hide their disappointment when Grandma gives them a pair of socks for Christmas, for example — but it also could help inform interventions with children who are autistic or generally slow to develop social skills.

“Two things children with autism have a lot of trouble with are language acquisition and social interaction,” Scott said. “They seem to have an especially hard time understanding false beliefs and deception. If we can understand a little more about how and when that capacity typically develops, we’ll have a better grasp of how to help kids with autism.”

Scott, with the School of Social Sciences, Humanities and Arts, has a number of other projects in the works to build on her findings. In one, she hopes to learn whether infants can understand how a person feels when they discover they have been deceived — recognizing the consequences of deception, both positive and negative, is another important step in social development.

In another study, Scott is examining the ability of children to articulate their understanding of deception, which typically doesn’t happen until around age 4. She hopes her research will lead to better early childhood education, particularly locally.

“Central Valley children face lot of challenges that others don’t,” Scott said. “I hope this research will benefit children here in the Valley and help early childhood educators be more effective when working with children from different backgrounds and at different levels of social development.”