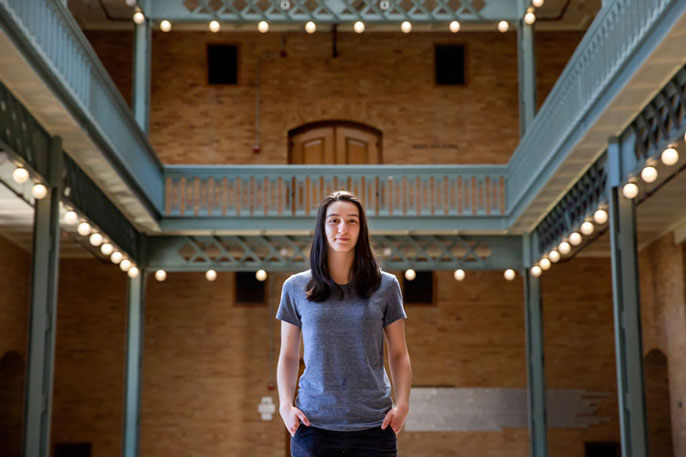 Leyla Kabuli, a senior graduating in music and electrical engineering and computer sciences, is the winner of the 2021 University Medal.

In addition to Kabuli, four other remarkable students were in the running for the award.

If Leyla Kabuli, a gifted musician and tech whiz, sets the bar for winning UC Berkeley’s highest honor for a graduating senior, future contenders for the University Medal may find themselves shooting for the moon.

At 7, Kabuli began mastering the piano. At 10, she was accepted to the pre-college division of the San Francisco Conservatory of Music with a scholarship, where she studied piano, violin, bassoon and chamber music.

In junior high, she played violin with the UC Davis Symphony. In high school, she played piano, harpsichord, celeste and organ with the San Francisco Symphony Youth Orchestra.

And that’s before she got to UC Berkeley on a prestigious Regents’ and Chancellor’s scholarship and directed her laser focus to electrical engineering and computer sciences (EECS).

By her senior year, she was fielding offers of full graduate fellowships from Berkeley, Stanford and MIT. She’s sticking with Berkeley for graduate school.

“I might be biased, but Berkeley has the best electrical engineering program in the country,” says Kabuli, who was born in Berkeley and raised in Davis, California.

She also credits the campus’s culture, diversity and grit for her decision to accept the Berkeley Fellowship for Graduate Study, which provides financial support for five years.

As top graduating senior, Kabuli, 21, a simultaneous degree student in EECS and music, with a perfect 4.0 GPA, will speak this Saturday, May 15, to thousands of her peers, in cap and gown, at a campus-wide virtual commencement ceremony.

The 150-year-old University Medal recognizes a graduating student’s outstanding research, public service and strength of character, and comes with a cash prize.

Kabuli’s research interests lie in diagnostic imaging, vision and perception. Among other things, she’s experimenting with super-resolution microscopy and magnetic particle imaging to help people in the medical profession get a better look inside the human body.

On a lighter note, she’s using the diverse tools of engineering and computer science to enhance the visual 3D entertainment experience.

“Simply put, I want to contribute to technology that’s going to improve the quality of people’s lives,” she says.

‘Too good to be true’

Kabuli got word that she’d won the medal on a recent Friday while meeting with her research group on Zoom.

As a rule, University Medalists are sworn to secrecy until their identity is revealed in a press release in the days leading up to commencement, so she had to keep the news under wraps.

“I’m not a jump-up-and-down kind of person,” she says. “But I was really happy for the rest of the day.”

Also happy will be the EECS professors who wrote her glowing recommendation letters.

“Leyla has perfect straight A’s, beating 450 of the strongest electrical engineering undergrads in the world,” wrote Steven Conolly, the M. Cook Endowed Chair of Bioengineering and EECS, in his letter recommending Kabuli for the medal.

“Yes, Leyla’s resume is already too good to be true!” he continued. “Leyla had to overcome cultural, family and gender obstacles to achieve her success.”

Kabuli prefers not to dwell on those obstacles, but to focus instead on what problems can be solved, she says.

It’s a lesson she learned from her mother, who came to Berkeley from Turkey as a student, earned her degrees in EECS in the 1980s, then joined the engineering faculty at UC Davis, where she teaches to this day.

“When my mom was a student at Berkeley, there were no female faculty on the electrical engineering side of EECS,” Kabuli says. “She taught me that when you put your mind to whatever you want to do, you can achieve it. So, I’ve never felt like there have been any barriers for me.”

Hence her jam-packed CV, which lists a Jacobs Institute Innovation Catalysts Ignite Grant, an Outstanding Graduate Student Instructor Award, a Samuel Silver Memorial Scholarship Award, an Edward Frank Kraft Award for Freshmen and a California Seal of Biliteracy in French and Turkish among her accolades.

She also performed for TEDxBerkeley and NPR’s “From the Top” podcast, which celebrates the life and talents of young, classically trained musicians.

As a mentor, she’s organized labs and presentations for middle and high school students in underserved schools. Her favorite thing is to spark their curiosity.

“At first, they’re kind of apprehensive, or trying to look cool,” she says. “Then, by the time they get to be hands-on in the lab and I’m working with them one-on-one, you can see their eyes light up.”

In addition to the Berkeley Fellowship for Graduate Study, she’s the recipient of a National Science Foundation fellowship for outstanding graduate students in STEM fields.

So, is there anything Kabuli’s not good at?

“Please don’t give me a final exam with an essay. It’s not going to go well,” she says. “I think I’ve always been a more analytical person. I’m a practical person. I like facts. I like science. I like data.”

What about when she’s playing music? “The only time I ever get out of my zone is if someone’s crinkling a candy wrapper,” she says. “That one just gets me every time.”

As a toddler, Kabuli built Lego structures in her mother’s office: “I practically grew up in the electrical and computer engineering department at UC Davis,” she recalls.

She first caught the music bug when she was 6 and watched Itzhak Perlman play the violin at UC Davis’s Mondavi Center. She wanted desperately to be up on stage with him and accompany him on the piano.

“It took a year of me nagging my mom to get me a piano. She finally got me a Casio electronic keyboard,” she says. As her skill level improved, so did her keyboards. Her mom got her a used baby grand, then a used grand piano.

“Kids at school saw me as the ‘piano kid’ who always had rehearsals or a competition,” she says.

In middle school, she played basketball, but didn’t try out for the team because, her violin teacher warned, broken fingers would cut short her musical career.

In high school, she took AP classes in math and science, and concurrent enrollment courses from community colleges, earning nothing less than A’s.

When it came time to choose a four-year college, the decision came down to UC Berkeley, UCLA, Harvard and Stanford. UC Berkeley won, hands down.

“It was one of the best places where I could do both music and be at a top engineering program,” she says.

Not that juggling the two was always easy. In her freshman and sophomore years, she zigzagged between Cory Hall, Morrison Hall, Dwinelle Hall, the Hearst Memorial Mining Building and Hertz Hall for classes, teaching assistant duties, music practice and recitals. In between, she’d commute to San Francisco for rehearsals and performances.

In the summer before her junior year, she landed an internship as a hardware engineering intern with Apple’s Exploratory Design Group, and worked on optics and computational imaging.

The experience taught her that the corporate world was not for her, and that she could make a greater impact in academia as a professor.

When COVID-19 hit the campus in the spring of her junior year, she and other tech-savvy teaching assistants found themselves on the front lines of transitioning students to remote learning.

As head lab teaching assistant of an EECS course with 1,000 enrolled students, she had a week to figure out what to do.

“We had no way of taking thousands of dollars of equipment and shipping it to a thousand people, right?” she says. “So, the first thing I had to do was archive and recreate as much data as I could to try to give students continuity and keep them learning.”

Since then, her life has calmed down considerably. Her courses, research and teaching duties still keep her busy, but she also takes hikes, socializes on Zoom and watches a lot of TV.

One solo piano recital at Hertz Hall stands out, as she reflects on her undergraduate years at UC Berkeley.

It was the first time her friends and faculty in both music and engineering came to watch her play on campus. Some in engineering didn’t even know she played piano at a virtuoso level.

“They all sat through an hour and a half of classical music,” she recalls. “They were quiet during the pieces. No one was snoring. No one was coughing. And at the end, they were cheering.”

It won’t be the last time Kabuli gets a standing ovation.