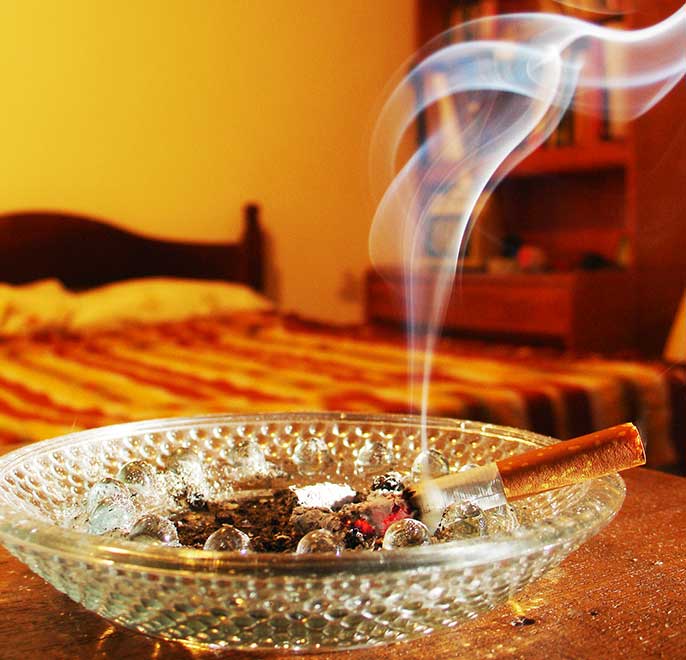 Ever walked into a hotel room and smelled old cigarette smoke? While the last smoker may have left the room hours or even days ago, the lingering odors — resulting from noxious residue that clings to walls, carpets, furniture or dust particles — are thanks to thirdhand smoke.

Scientists at the U.S. Department of Energy’s Lawrence Berkeley National Laboratory, who have made important findings on the dangers of thirdhand smoke and how it adsorbs strongly onto indoor surfaces, have published a new study assessing the health effects of thirdhand smoke constituents present in indoor air. Looking at levels of more than 50 volatile organic compounds (VOCs) and airborne particles for 18 hours after smoking had taken place, they found that thirdhand smoke continues to have harmful health impacts for many hours after a cigarette has been extinguished.

“In the U.S., the home is now where nonsmokers are most exposed to second- and thirdhand smoke. The goal of our study is to provide information supporting effective protective measures in the home. The amount of harm is measurable even several hours after smoking ends,” said chemist Hugo Destaillats, lead author of the study. “Many smokers know secondhand smoke is harmful, so they don’t smoke when their kids are present. But if, for example, they stop smoking at 2 p.m. and the kids come home at 4 p.m., our work shows that up to 60 percent of the harm from inhaling thirdhand smoke remains.”

The Berkeley Lab team has done previous studies establishing the formation of harmful thirdhand smoke constituents by reaction of nicotine with indoor nitrous acid, showing that nicotine can react with ozone to form potentially harmful ultrafine particles, and finding that thirdhand smoke can cause genetic damage in human cells. These studies focused primarily on chemical contaminants adsorbed to indoor surfaces, entering the human body through dermal uptake or ingestion of dust. The new study focuses on a third type of exposure, inhalation. The study shows that this route of exposure, even after the smoke dissipates, is also significant.

The team collected data from two environments: one was a room-sized chamber at Berkeley Lab where six cigarettes were machine-smoked and levels of particulate matter and 58 VOCs were monitored during an aging period of 18 hours; the second was a smoker’s home, where field measurements were made 8 hours after the last cigarette was smoked. Logue led the health analysis, using an impact assessment approach that she has used for studying indoor air pollutants.

Health data was available for only about half of the measured chemicals. For those Logue used a metric called DALY, or disability-adjusted life year, to quantify the health impact. The DALY is commonly used by the World Health Organization (WHO) and others in the public health field as a way to combine loss of life with loss of quality of life in a single metric.

Looking at DALYs lost as a function of time, the study found that the total integrated harm rises sharply in the first five hours after a cigarette has been smoked, continues to rise for another five hours, and doesn’t start to level off until after 10 hours.

PM2.5, or particles that are less than 2.5 micrometers in diameter, can be inhaled deeply into the lungs and cause serious health problems. The study identified also those tobacco VOCs with the highest health impacts, some of which exceeded concentrations considered harmful by the state of California over the entire 18-hour period.

The researchers caution that this was an initial scoping study, in which they had to rely on health data available for outdoor air particles. Common outdoor sources include vehicle exhaust, forest fires, and burning of fuels. “Tobacco particles have a different composition than outdoor air particles, but there are chemical similarities,” Gundel said. “This is a first-order approximation.”

The study is part of a research agenda developed by the California Consortium on Thirdhand Smoke, which was established in 2011 largely as a result of work published in 2010 by Destaillats, Gundel, Sleiman, and others. The consortium, which includes researchers from Berkeley Lab, UC San Francisco, UC Riverside, the University of Southern California and San Diego State University, is funded by the Tobacco-Related Disease Research Program, managed by the University of California. Its goals are better understanding the health effects of thirdhand smoke, identifying the most effective control policies and practices to protect nonsmokers, and developing methods to remediate indoor environments contaminated with thirdhand smoke.