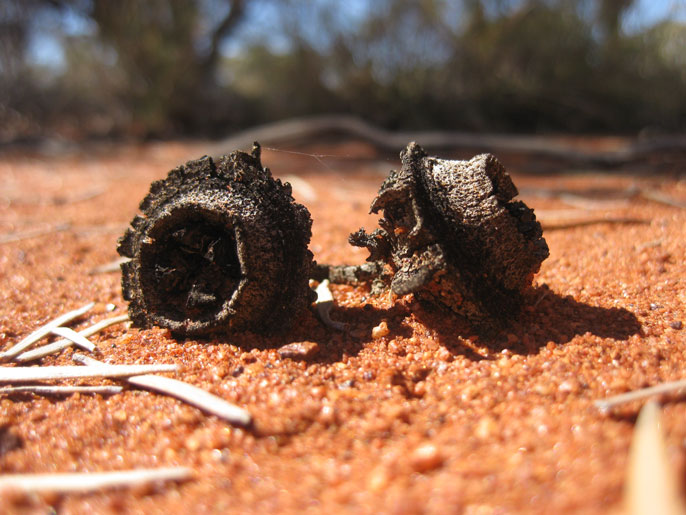 Fruits of Eucalyptus kingsmillii lying in the sand of the Great Victorian Desert in Western Australia. Eucalypts currently occupy a wide range of distinct habitats across Australia — some of which are projected to disappear in the next 60 years due to climate change.

Loss of habitat. Migration. Extinction. Over the coming decades, thousands of species are predicted to be severely affected by climate change. New research shows that climate change won’t prune the tree of life evenly — it may make especially deep cuts on certain branches that we can’t afford to lose.

Predicting where and how species will lose ground is essential for conservation efforts. In plants, extensive range losses are expected for individual species, most notably for endemic species that only occur in specific areas around the world. Relatively little is known, however, about how climate change could impact whole groups of related species and biodiversity on a larger scale.

In a study published this week in Nature Climate Change, a team including UC Berkeley researchers Brent Mishler and Andrew Thornhill, led by Carlos Gonzalez-Orozco from University of Canberra, used a new big data analytic method to model the effects of climate change on eucalypts, Australia’s most dominant and widespread trees, taking into account detailed ranges for each species and their evolutionary relationships based on thousands of DNA sequences.

Eucalypts, a large group of plants in the myrtle family including Eucalyptus and closely related genera, are found in nearly every part of Australia. There are upward of 800 species across the continent, more than 700 of which were captured in the analysis. The group chose to focus on eucalypts because of its extreme diversity of forms and preferred habitats, and the mix of both young and old lineages in the group.

“There isn’t a perfect comparison for eucalypts in North America,” said Thornhill. “Think oaks, but much more diverse and dominant. If you took the eucalypts out of Australia, you’d basically have no trees in most of the country.”

The study projects that within the next 60 years, the ranges of the vast majority of species (91 percent) across Australia will shrink in size by roughly half on average, and suitable habitat will tend to shift south and to higher elevations. For 16 species in the study, suitable habitat will disappear altogether.

While there’s no shortage of dark cloud predictions for climate change, this one comes with a silver lining: the method used in the study is a powerful new tool for identifying areas of immediate conservation concern, along with areas that will become important refuges as conditions change.

Why evolution matters to conservation

For conservation efforts, saving as many species as possible from extinction is the overarching goal, but the reality is that land managers always have to prioritize. With limited resources, it becomes a matter of triage.

“There comes a point when we have to make decisions on which taxa need conservation, and some things are just more valuable than others. Think of a one-of-a-kind family heirloom, say a beloved quilt made by your grandma. You can go out and buy a mass-produced blanket that warms you just as well, but grandma’s is special — it’s unique,” explained Mishler, director of the University and Jepson Herbaria, senior fellow of the Berkeley Institute for Data Science, and professor in the Department of Integrative Biology.

On the tree of life there are also precious heirlooms.

“Genetic diversity is valuable, and long branches of the tree of life simply have more. They have the most unique traits genetically, morphologically, ecologically and in their chemistry,” said Mishler.

As an example, Mishler points to California’s iconic redwoods, an old, distinctive group of conifers found only in a narrow band along the coast of Northern California and Oregon, where summer fog persists — for now.

“Sometimes these areas are referred to as ‘museums’ and ‘nurseries,’” said Mishler. “The museums are areas where old, long branches of the tree of life have persisted over long periods of time. Nurseries are areas where we are seeing a lot of recent diversification taking place. Both are valuable in different ways.”

In the current study, the researchers found that the loss of suitable habitat will not be equally distributed over the eucalypt tree of life: it’s the rare, old lineages that will be the most severely affected. Across Australia, the study also predicts not just a loss of diversity in specific places, but a general trend toward homogenization: as unique endemic diversity is lost, everywhere becomes more alike.

“Big data” can be a buzzword, but for this new method to work, not only do you truly need massive amounts of data, you need data of a sort that has only recently become available, as well as powerful tools to crunch the numbers.

For this study, the researchers needed accurate location data from millions of plant specimens across Australia, and an accurate phylogeny (i.e., evolutionary tree) based on DNA sequences from each of those plant taxa.

“Fully databased plant specimen records from herbaria have only been available for 10 years or less in most cases, and the ability to access these and download the data has only happened in the last five years,” said Thornhill.

Australia was the first country to put all plant specimen data online in a way that’s publicly accessible and searchable via Australia’s Virtual Herbarium.

“The U.S. is still playing catch-up,” said Mishler. “A lot of the new methods for how to analyze large amounts of specimen data has also come out of Australia. Because they were the first to have the data, they were also the first to develop the tools.”

The concept of phylogenetic diversity dates back to the early 1990s, but it was only theoretical at the time.

“There was no way to implement it until we had the big data sets we have today as well as the tools to deal with big spatial data and DNA sequence data,” said Thornhill.

From Australia to the world

In a related study published this month in the Journal of Biogeography, the research group zoomed out beyond the eucalypts in an analysis that incorporated 90 percent of Australia’s flowering plant genera and 3.4 million georeferenced plant specimens.

“Some of the same general patterns hold when you look at all plants across the continent, but individual lineages are different, special,” said Mishler. “You really have to look at both scales to get the full picture.”

In an ongoing NSF-funded study, the group is taking a similar approach to the California flora, incorporating taxa from every lineage of California plants, thanks to the over 2 million georeferenced plant collections in the Consortium of California Herbaria and a recent citizen science “rare plant treasure hunt” that helped Thornhill fill in gaps in existing DNA sequence data.

Once the work on the California flora is complete, Mishler says the group plans a very practical product: a simple, prioritized list of areas in California that need protection as the effects of climate change become increasingly apparent across the state.