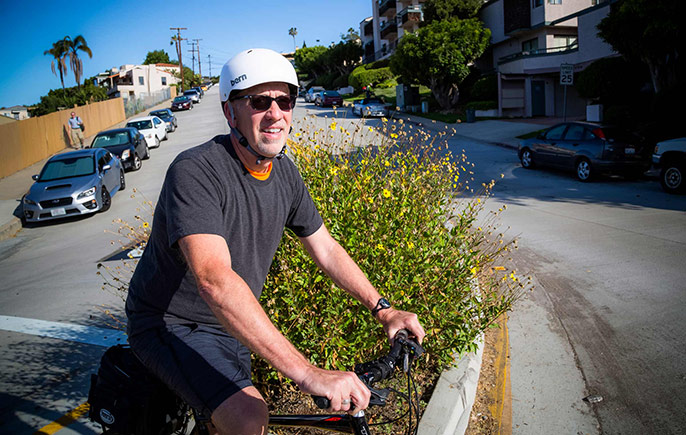 David Higgins was diagnosed with Parkinson's disease years after his initial symptoms appeared.

Like many young people, David Higgins was initially in denial about the possibility of having a serious, lifelong disease.

“My friends would say, ‘You walk funny,” and I’d say, ‘I have a stiff back,’’ recalled Higgins, now 57. ”Parkinson’s was the last thing on my mind,” he said, or on the mind of his doctor at the time, who had him tested for cardiovascular disease, brain cancer and stroke.

“There was a lot of rationalizing and denial on my part,” said Higgins even though his mother, maternal grandmother and an uncle all died of Parkinson’s disease, a group of progressive motor system disorders that affect as many as 1 million Americans.

Eventually, after several years, Higgins’ worsening condition was impossible to ignore. “I went out for a run one day and it felt like I was moving through mud. I knew I had to do something.”

That something was a life-changing consultation with Dr. Irene Litvan, the Tasch Endowed Professor in Parkinson’s Disease Research and director of the Movement Disorder Center at UC San Diego Health System.

“Dr. Litvan diagnosed me in 2.5 seconds,” Higgins said. “At the exact precise moment she said ‘You have Parkinson’s,’ there was relief. Adversity is less troubling than ambiguity.”

Higgins was Litvan’s first patient on her first day of clinical work at UC San Diego.

Since then, under her leadership, the Movement Disorder Center has grown and blossomed. In February, the center’s outstanding track record in comprehensive patient care, research and education was formally recognized by other leaders in the field through its designation as a Center for Excellence by the National Parkinson Foundation.

There are only 25 Centers of Excellence for Parkinson’s in the United States; 16 internationally.

Peter Schmidt, vice president of research and professional programs at the Parkinson Foundation, characterized the designation as reflecting a shared vision “for the integrated research and care enterprise, where patient-focused clinicians deliver the latest care and newest therapies.”

“Their clinic benefits from research into novel approaches that advance our knowledge and their research agenda reflects the priorities of patients and families,” he said.

Higgins puts it this way: “I know good people attract good people. The Center of Excellence will bring in smarter and better researchers to whom I will have access. I know I will have immediate, early access to any innovations that come about, and I have Dr. Litvan to filter out which new treatments are most substantiated and relevant to me. It means I get the best care possible.”

Parkinson’s disease — the disease that actor Michael J. Fox has — is a chronic, progressive neurological disorder, characterized by tell-tale tremors, stiffness and other declines in motor control. Loss of motor function is caused by degeneration of neurons that produce the chemical messenger dopamine. Classic Parkinson’s disease symptoms usually begin when 50 to 80 percent of these dopamine neurons have died.

The Holy Grail of many progressive, currently incurable, diseases — including Parkinson’s — is to be able to diagnose the disease in its earliest stages and halt its progression before damage has been done. Among the more intriguing discoveries made about Parkinson’s in recent years is that some of its earliest signs may be unrelated to declines in motor skills. Loss of smell, constipation, depression and dream-enacting behaviors, for example, often precede more identifiable Parkinson’s symptoms.

“The definition of Parkinson’s disease is presently being refined,” said Litvan, who is a member of the International Parkinson and Movement Disorder Task Force working on this re-definition. “One of the advantages of being treated at a Center of Excellence such as ours is that the professionals who evaluate patients also participate in research and are up-to-date on the latest diagnostic methods, technology and treatment options for Parkinson’s disease and related disorders.

UC San Diego is one of only a few centers in the nation conducting research on a PET scan that detects deposits of a protein called tau that aggregates in the brain of patients with a related Parkinsonian disorder called progressive supranuclear palsy (PSP). “The PET scan may allow us to make an accurate diagnosis of this disorder in vivo,” Litvan said. “This could help us properly manage the person’s condition and identify people who would be most likely to benefit from investigational therapies.”

There is also a growing interest in identifying biomarkers in blood that could inexpensively and non-invasively diagnose different neurodegenerative disorders at their most incipient stages.

Another promising development is evidence suggesting that Parkinson’s may spread from one neuron to its neighbors by aggregations of a protein called alpha-synuclein. If this is the case, capturing and removing the aggregations before they affect neighboring cells might slow or halt the progression of the disease. “I am very excited about this area of research,” Litvan said.

Litvan is also involved in a phase 3, double-blind placebo-controlled study of a calcium channel blocker use to treat high blood pressure. In animal studies, the drug, called isradapine, blocks specific calcium channels that increase before dopamine-producing neurons die. “We hope what is observed in animals will also occur in humans,” she said.

Since 2011, Higgins has gone on medications and embraced a physical therapy regime at the Movement Disorder Center that has virtually erased any outward signs of illness. He has also become a full-time patient advocate for Parkinson’s and was recently in Washington, D.C. lobbying officials to appropriate more funding for Parkinson’s disease research.

“People see me and they ask why I am here,” he said. “They can’t tell I have Parkinson’s. I am here because I believe that institutions like UC San Diego and science in general are our hope for new therapies and cures.”