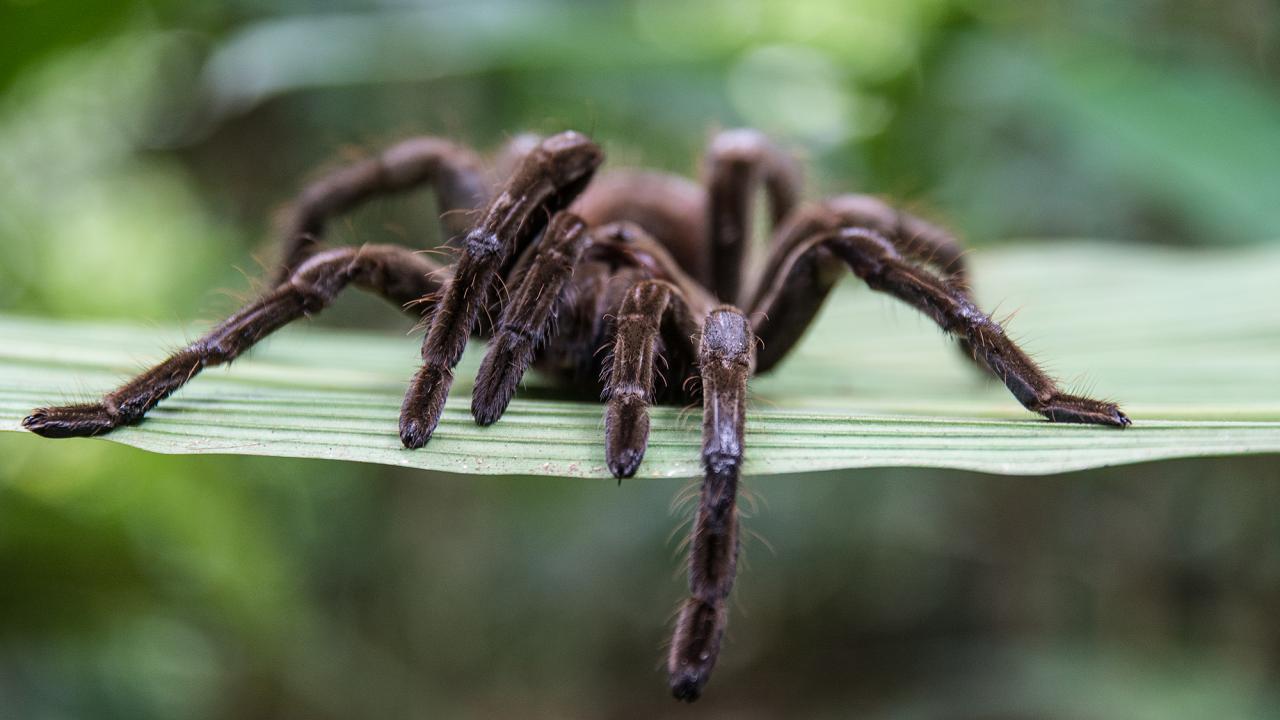 A new pain reliever from tarantula venom isn’t the only non-narcotic drug being developed at UC Davis. In 2020, the Food and Drug Administration granted fast-track designation to a non-narcotic drug candidate from EicOsis LLC, a pharmaceutical company founded by UC Davis Distinguished Professor Bruce Hammock to treat chronic pain in humans and companion animals. Read more in this news release.

Researchers at UC Davis are developing a new type of pain medication from an unusual source — tarantula venom.

The project is part of the NIH Helping to End Addiction Long-Term (HEAL) Initiative, aimed at ending opioid addiction and creating non-addictive therapies to treat pain.

Vladimir Yarov-Yarovoy, a professor of physiology and membrane biology, and Heike Wulff, a professor of pharmacology, are leading the 20-person team using computational biology to turn a poisonous peptide into one that can relieve pain. Peptides are smaller versions of proteins.

“Spiders and scorpions have millions of years of evolution optimizing peptide, protein and small-molecule poisons in their venom, which we can take advantage of,” said Bruce Hammock, a UC Davis distinguished professor who is working on the new pain reliever. “The same venoms that can cause pain and neurological dysfunction can also help nerves work better and reduce pain.”

Approximately 20 percent of adults in the U.S., around 50 million, are affected by chronic pain. About 11 million are affected by high-impact chronic pain, defined as pain that lasts three months or longer and restricts a significant activity, like being unable to work outside the home, go to school or do household chores.

A few nonopioid medications are available to help those with chronic pain, and complementary or integrative health approaches can help. In general, though, people with chronic pain have limited options for pain relief.

“For strong pain, drugs like ibuprofen or aspirin are just not strong enough. Opioids are strong enough, but they have the problem of tolerance development and addiction,” said Wulff.

“What we need are new medications, new therapies with improved risk profiles,” said David Copenhaver, a member of the team and director of Cancer Pain Management and Supportive Care at UC Davis Health. “There’s been a push to develop other, better, safer, less addictive — or zero addictive — medication and therapeutics for pain management,” said Copenhaver, who is also the associate director for the Center for Advancing Pain Relief at UC Davis.

To create a nonaddictive but strong pain medication, the researchers are focused on pain signals traveling on sensory neurons. To stop these signals, they have targeted a particular type of protein “channel” found on the cell membranes of neurons and muscles.

Nine different types of these channels have been identified in humans. The sodium symbol is Na, so the voltage-gated channels are referred to as Nav1.1 through Nav1.9.

The Nav1.7 channel is the one that interests pain scientists the most because it is a key source of pain transmission.

That’s where the tarantula venom comes in. A peptide found in the venom of the Peruvian green velvet tarantula blocks Nav1.7, preventing it from transmitting signals, including those for pain.

“The promise of a Nav1.7 inhibitor is that we would have something that is as effective as an opioid, but not addictive,” said Wulff, who specializes in preclinical therapeutics development targeting ion channels.

The challenge with the protein in the tarantula venom is that it doesn’t just block Nav1.7 channels in the sensory nerves. In its natural form, the peptide blocks all Nav1.7 channels, including those in the muscles and the brain, meaning that it could cause terrible side effects.

To solve this problem, the researchers are using an approach known as “toxineering.” They are trying to engineer — modify — the toxin in the venom to block pain signals but not create unwanted side effects.

To do this, they are using a computer program developed by the University of Washington called Rosetta. The complex modeling software lets the team create many different iterations of the tarantula peptide, which they can then synthesize and test in the lab.

“Using the Rosetta software, we can take a natural peptide and then redesign it and make it into a therapeutic,” said Yarov-Yarovoy, an expert in computational structural modeling of peptide toxins. “Our lead peptides already show efficacy at the level of morphine, but without the side effects of opioids.”

Their preliminary results are extremely promising, but a lot of work remains to be done. The potential therapeutic candidates will need to be tested in animals, and if found safe, carefully tested in humans. The researchers estimate any new medication is at least five years away.

“What Vladimir has put together is really fantastic because no one scientist could have any hope of tackling a project that is this hard,” Hammock said about the 20-person team. “But having a collection of people makes it fun and exciting, and I think it gives us a real chance at relieving pain.”