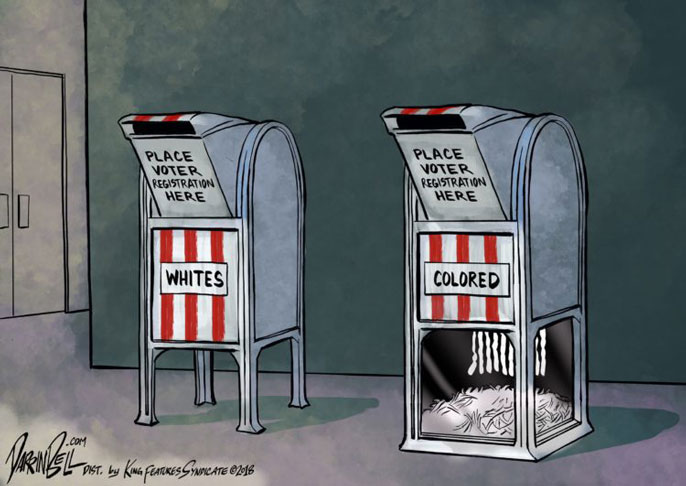 This cartoon was part of a 19-panel submission by UC Berkeley’s Darrin Bell that earned him the 2019 Pulitzer Prize for editorial cartooning.

When the 2019 Pulitzer Prize winners were announced this week, two alumni of the UC Berkeley Graduate School of Journalism and a former cartoonist for the Daily Californian staff were honored.

Stephen Hobbs, who earned his master’s degree in 2014, was part of the South Florida Sun-Sentinel staff in Broward County that won the public service award for its coverage of the mass shooting last year at Parkland’s Marjory Stoneman Douglas High School. Their work exposed the failings by school and law enforcement before and after the deadly rampage.

Joining him was Alexandra Berzon, who won her first Pulitzer in 2009 at the Las Vegas Sun. Berzon collected her second Pulitzer this week as part of the Wall Street Journal team awarded the national reporting prize for uncovering President Donald Trump’s secret payoffs to two women who claimed to have had affairs with him, and the web of supporters who facilitated the transactions. Their reporting triggered criminal inquiries and lead to calls for Trump’s impeachment.

Darrin Bell, who started cartooning for the Daily Cal in 1995, is a freelance cartoonist whose work has appeared in the Los Angeles Times, San Francisco Chronicle, Oakland Tribune and Washington Post and who is a contributing cartoonist to the New Yorker. The Pulitzer committee awarded him the editorial cartooning prize “for beautiful and daring editorial cartoons that took on issues affecting disenfranchised communities, calling out lies, hypocrisy and fraud in the political turmoil surrounding the Trump administration.”

Although they are both products of the Graduate School of Journalism, Hobbs and Berzon don’t know each other. But Hobbs says he’d known about Berzon since her stand-alone Pulitzer for public service after writing about Las Vegas Strip construction worker deaths, the projects that they’d been working on and the Occupational Safety and Health Administration (OSHA) response to the deaths.

“That’s her second; I feel very lucky to be in her company,” Hobbs says.

‘A story you never want’

Hobbs, who grew up in Walnut Creek and attended Santa Clara University before coming to UC Berkeley, has moved on from the Sun-Sentinel, having started at the Post and Courier in Charleston, S.C., in March.

“As journalists, we were talking with people going through this horrible tragedy, but at the same time, we had to be able to take a step back and make sure we helped each other out,” Hobbs says of covering the mass shooting.

“It really took a toll on a lot of us. I wasn’t there, but I understand there was a lot of crying in the newsroom when the award was announced. With the weight of all that has happened in the last year, there were mixed emotions.”

Hobbs, part of the core team of Sun-Sentinel reporters who worked on the Parkland story, recalls briefly stepping outside the newsroom on Feb. 14, 2018, just before news of the shooting broke.

“Everything was fine; I stepped out for a moment,” he says. “When I came back in, I saw the TV on, with the report of the shooting. It didn’t resonate immediately. Then you just turn into the journalist/breaking news mode. It wasn’t until the end of the day that you talk with people, and it settles in. It’s then that you realize the gravity of it all.

“For someone like me who doesn’t have kids, it might be something of a different experience. But the people I’m working with, they are feeling concerned about the safety of their kids, and seeing people you know and seeing how they were impacted, it was really hard.”

Hobbs and the Sun-Sentinel team investigated shooter Nikolas Cruz, the response of the police and the school administration, “just trying to figure out how it unfolded and seeing if the shooting could have been avoided,” Hobbs says. “In the end, we were breaking down the response and how and where there were issues that caused problems for law enforcement and medical personnel.”

From casinos to Cohen

Berzon, a 2006 product of UC Berkeley’s J-School, says she’s thrilled about winning her second Pulitzer with The Wall Street Journal, but stresses that it was a collaborative effort and that lead reporters Michael Rothfeld and Joe Palazzolo did the lion’s share of the work, with the aid of investigative editor Michael Siconolfi’s team.

“My history was that, during the presidential campaign, I did a lot of reporting around Trump and business,” Berzon says. “I was the casino reporter, and I’d gotten to know the Trump business that way. I was doing stories flushing out (Trump attorney) Michael Cohen and looking at his relationship with Donald Trump.”

“Once Trump won, I immediately got to know Michael Cohen better, did some interviews with him at Trump Tower during the transition. I did a profile of him, but I was doing a lot of work on (Las Vegas casino magnate and Republican National Committee finance chairman) Steve Wynn and his misconduct.”

Wynn was forced to resign as CEO of his own company, Wynn Resorts, and to step down as the Republican National Committee’s finance chairman in 2018 after allegations of sexual improprieties.

“Just before the election, Palazzolo and Rothfield got a tip about Karen McDougal and Donald Trump. There was something about Stormy Daniels, too, but they didn’t have it nailed down at the time,” she says.

“Since I had the background on Cohen and Trump’s business workings, I was doing work on that. I feel very proud and honored by this, and I feel like I was a small part of a big story. I was helping flush out things concerning Michael Cohen and his relationship with Donald Trump.”

‘The importance of human dignity’

Over at the Washington Post, Bell, 44 and a resident of Sacramento, became the first African American to be awarded the editorial cartooning Pulitzer, which has been handed out since 1922.

“My mission has always been the same; it’s been to try to remind people of the importance of human dignity,” Bell says. “Whether the issue is police brutality, the sight of children being separated from their parents or the president coddling white supremacists, at the core it’s just disrespect.

“It’s denying people the dignity they deserve. I try to point out what people think when it is being denied. I hope it sinks in that it’s not OK. I’m grateful that people think I’ve made a valuable contribution to the national dialogue, and it inspires me to keep on doing that.”

Bell, whose political cartoons are now syndicated by King Features, has previously won major cartooning honors, including the RFK Award and the Berryman Award. He does other cartooning, too, including the daily strip Candorville, which runs in many major newspapers nationally.

Other finalists and contributors

UC Berkeley students also had a major assist in yet another Pulitzer. Reuters’ 10-story investigation, “Myanmar Burning” won the international reporting prize for exposing the military units and Buddhist villagers responsible for the expulsion and murder of the country’s Rohingya Muslims.

One of the 10 stories, reporter Steve Stecklow’s “Inside Facebook’s Myanmar Operation Hatebook,” about the weaponization of Facebook in Myanmar, was given a huge boost by students in UC Berkeley Law’s Human Rights Investigations Lab. They were credited for helping to translate and collect more than 1,000 examples of social media posts, comments, images and videos attacking the Rohingya or other Myanmar Muslims.

“The anti-Rohingya and anti-Muslim invective analyzed for this article — which was collected by Reuters and the Human Rights Center at UC Berkeley School of Law — includes material that’s been up on Facebook for as long as six years,” Stecklow says in his piece.

Noah Berger was a finalist in general news photography as a freelancer who was part of the Associated Press (AP) photography team that provided “devastating images that chronicled the historic 2018 fire season in California and captured the destruction from massive blazes as they spread at an extraordinary pace.”

“I did every major fire for AP last year except one,” Berger says. He’s been freelancing in the Bay Area since leaving UC Berkeley in 1994 and lately has been spending his summers shooting fires. “This is a very cool thing to win.”

Garance Burke, a UC Berkeley undergrad as well as a member of the J-School class of 2004, was on the Associated Press team that was named a finalist in the national reporting category for “authoritative coverage of Trump’s administration’s migrant family separation policy that exposed a federal government overwhelmed by the logistics of caring for and tracking thousands of immigrant children.”

“(I’m) grateful to all the people who bravely told us their stories, sometimes at huge risk,” Burke tells Berkeley News in an email. “It’s an honor to bring their experiences to light and to bring attention to how immigration policies impact the most vulnerable: children.”

And 1993 UC Berkeley graduate Jennifer Bjorhus of the Minneapolis Star Tribune was a finalist in the local reporting category for “an illuminating and disturbing series that exposed breakdowns in Minnesota’s investigation and prosecution of rape cases, and how such ineptitude fails victims of sexual assault.”

“We are thrilled to place in such a competitive contest with such incredible competition,” Bjorhus says via email. “I feel a debt of gratitude to the J-School.”