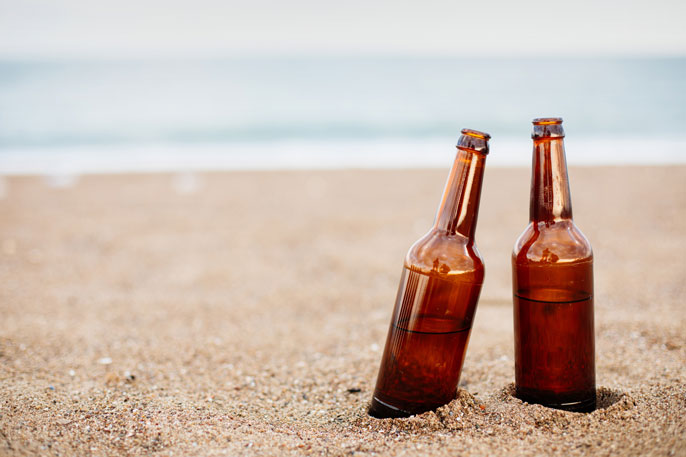 Fittingly, some of this year's buzzed about research was on beer, the world's most popular alcoholic beverage by volume consumed.

A looming beer shortage, the gender paradox and a surprising link between consumer products and air pollution were among the UC research findings that got the world talking in 2018.

Those studies were among the most shared, discussed and tweeted in popular and online media around the globe, according to the Altmetric Top 100, an annual ranking that assesses the dissemination of scientific and scholarly research through both peer-reviewed papers and scholarly research, as well as news articles, social media and blogs.

Will beer be a casualty of climate change?

Drought may not only lead to water shortages. It could soon also threaten the global supply of beer.

That’s according to a study by UC Irvine and other researchers, which modeled how predicted increases in drought and heat waves could impact crop yields for barley, the primary ingredient in beer. An increasing number of hot and dry years could cut harvests by 16 percent, an amount equivalent to the entire U.S. beer market.

The shortages would send the price of a pint soaring and turn the traditional workingman’s beverage into a luxury out of reach for most.

“The world is facing many life-threatening impacts of climate change, so people having to spend a bit more to drink beer may seem trivial by comparison,” said co-author Steven Davis, UC Irvine associate professor of Earth system science. “But there is definitely a cross-cultural appeal to beer, and not having a cool pint at the end of an increasingly common hot day just adds insult to injury.”

The more men and women are equal, the more they want different things

In societies that are wealthier and more gender equal, men and women may actually differ more in what they want and what drives their decision-making.

Those are the findings suggested by a study co-authored by UC Berkeley graduate student Johannes Hermle, which analyzed answers to Gallup Poll questions from men and women across 76 countries, accounting for 90 percent of the world’s population.

The questions looked at preferences that drove economic decision-making, including patience, a willingness to take risks, interest in charitable giving, a desire to reward kindness and a drive to punish slights.

Researchers found differences in response by gender across all countries: for example, more women were altruistic and willing to delay gratification while more men were inclined to take risks and settle scores. The differences were especially pronounced in countries where access to basic needs and similar levels of opportunity enabled men and women to more freely choose their life paths.

Consumer products, such as shampoo, cleaning supplies and paint, now contribute as much to urban air pollution as tailpipe emissions from vehicles, according to a study by researchers at UC Davis and UC Berkeley.

Cars spew a lot less pollution than they once did, so other sources now account for a bigger share of our smog, researchers said. So, in a funny way, it’s kind of good news. The other happy prospect: Consumers can choose to do better.

“What’s exciting about this work is that it shows that everyday consumer choices can have an impact on air quality in the U.S.,” said UC Davis co-author Christopher Cappa.

The sugar industry suppressed evidence of their product’s health risks

UCSF researchers scoured internal sugar industry documents from the late 1960s and uncovered evidence that the sugar industry buried scientific research that pointed to the negative health effects of sugar.

According to the UCSF study, the Sugar Research Foundation funded animal research to evaluate the effects of sugar on cardiovascular health. When evidence from the project seemed to indicate that sucrose might be associated with heart disease and bladder cancer, the foundation ended the research without publishing the results or revealing any evidence of harm.

“The Sugar Association proved to itself that calories from sugar had different metabolic effects than calories from starch in 1969,” said lead author Cristin E. Kearns, DDS, MBA, who discovered the industry documents. “This is in stark contrast to its public position, then and now, that all calories are created equal.”

Sorry, adults: Your brain isn’t as regenerative as once thought

One of the liveliest debates in neuroscience over the past half century surrounds whether the human brain renews itself by producing new neurons throughout life, and whether it may be possible to rejuvenate the brain by boosting its innate regenerative capacity.

UCSF and UCLA scientists have now poked a hole in that idea. They looked at the human hippocampus — a region essential for learning and memory — for evidence that new neurons continue to be born throughout a person’s lifespan. Their conclusion: Neurogenesis declines throughout childhood and is undetectable in adults.

“We find that if neurogenesis occurs in the adult hippocampus in humans, it is an extremely rare phenomenon, raising questions about its contribution to brain repair or normal brain function,” said UCSF’s Arturo Alvarez-Buylla.