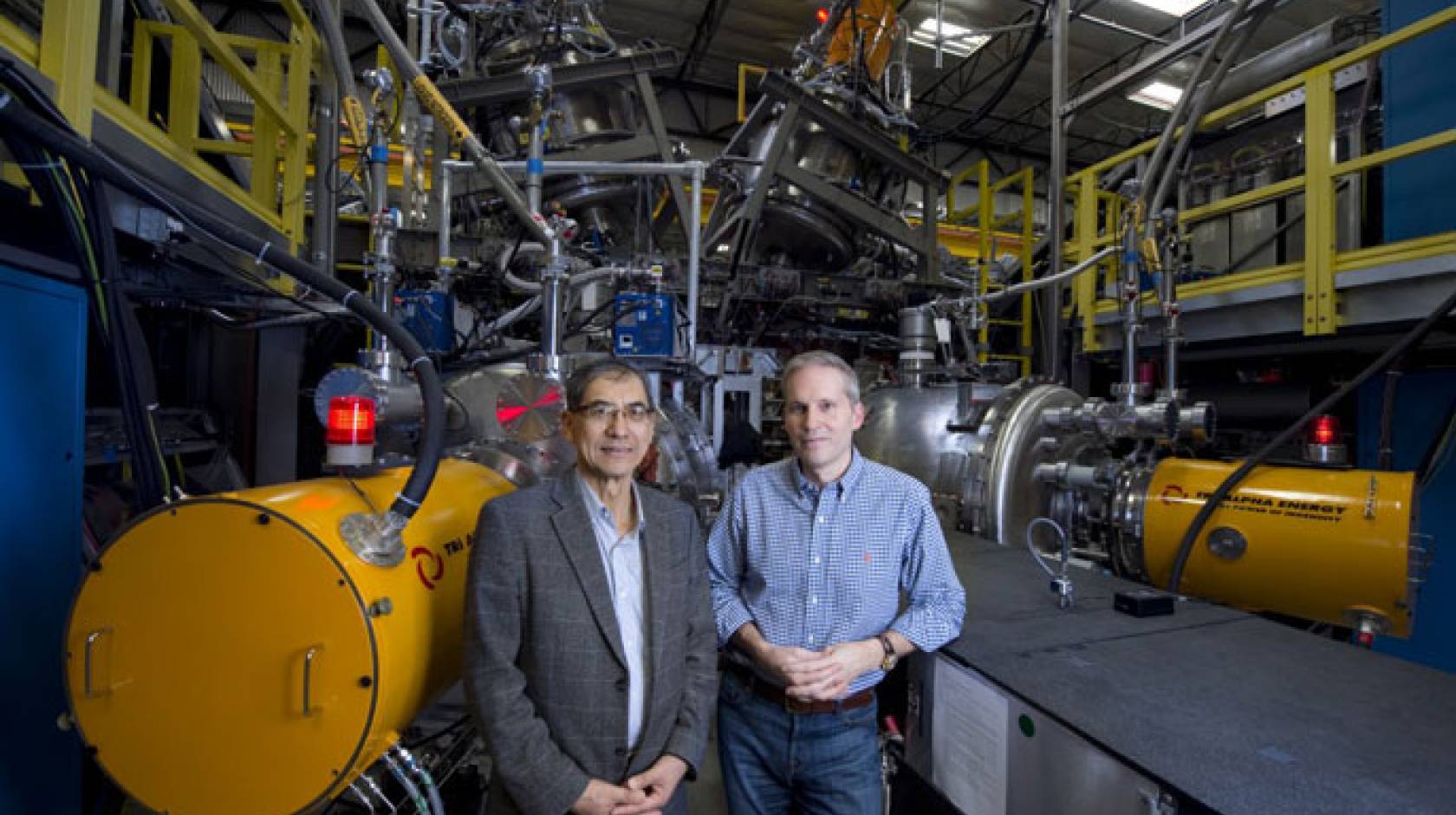 Occupying a nondescript building on the outskirts of suburban Orange County that looks more like a warehouse than a superhero’s lair, a team of scientists and engineers believe they’re on a path to saving the planet. They work for Tri Alpha Energy, a company with deep connections to the University of California, Irvine, and their research facility houses an experimental fusion reactor that may be the most viable avenue yet toward producing clean, abundant and sustainable energy for the world’s power grids.

Based on concepts developed by pioneering UC Irvine physicist and TAE co-founder Norman Rostoker, the company’s prototype reactor is unlike any of the other large-scale fusion projects around the world, and the approach has shown tremendous promise. TAE has demonstrated the ability to keep a volume of suspended fusion plasma stable for a potentially indefinite period of time. Super-hot plasmas are necessary to facilitate fusion reactions, but containing and controlling the roiling gaseous blobs has been the fundamental challenge of all fusion energy efforts.

“What we did last summer, which is a breakthrough, is show that we could hold this plasma flat,” says TAE Chief Technology Officer Michl Binderbauer, a UC Irvine alumnus who studied under Rostoker, referring to the graph generated in tests that shows energy on the x-axis and time on the y-axis. “It no longer decays; it retains its energy, density, temperature and magnetic field.

“While this isn’t done at conditions enough to produce reactor-level fusion yet, it’s a precursory must-have. Now that we’ve got a plasma inside our reactor that’s stiff enough and behaves well, we can actually extrapolate it to higher energy states.”

Long a goal of scientists, academics and government leaders, fusion power has the potential to be a virtually limitless and carbon-neutral energy source. While fission reactors split atoms to generate power, fusion plants will produce energy by joining atoms together in a process similar to what goes on in our sun and its billions of counterparts throughout the universe. Stars have an advantage, though: They’re surrounded by empty space, and gravity both drives and confines their reactions.

Here on Earth, if you want to harness the energy created by a fusion reaction, you need to find a way to contain the plasma medium in which hydrogen atoms are coming together and prevent it from damaging the reactor vessel. Other prominent fusion projects, such as the International Thermonuclear Experimental Reactorbeing built in France, rely on huge, heavy containment structures ringed by powerful magnets to suspend hot plasmas and hold them in a prescribed formation. All of this is surrounded by tons of concrete and shielding to stop any escape of radioactive particles into the atmosphere.

TAE’s apparatus is also based around a plasma containment chamber, but high-energy particle beams shape and suspend the football-shaped blob, which is about 1 meter in diameter at its middle and 2 meters in length. The company’s scientists and engineers have figured out how to use these beams to control plasmas with extreme precision.

Chief Science Officer Toshiki Tajima – who also studied under Rostoker, received a doctorate in physics in 1975 and is currently UC Irvine’s Norman Rostoker Chair in Applied Physics – likens the process to a familiar children’s toy. “If you keep applying force to a spinning top,” he says, “it will maintain its balance.”

TAE’s combination of plasma and particle physics is the legacy of Rostoker, who joined the faculty in 1972 and died in late 2014. He was an expert in both fields and believed throughout his long career that, in tandem, they offered an answer to the riddle of fusion energy production. The Rostoker research group’s first prototype reactor, dubbed “the sewer pipe” because of its fiberglass tubing, was built on the UC Irvine campus in 1999 and 2000.

“Norman was a plasma physics star and a maverick,” says Binderbauer, who earned a Ph.D. in physics at UC Irvine in 1996. “A lot of the ideas that are encapsulated in what we do are really born out of Norman’s experience.”

"The future of the planet is at stake"

Another signature part of TAE’s approach is the use of proton-boron-11 as a fuel source. Other projects need heavy shielding because they’re fusing deuterium and tritium, hydrogen isotopes, resulting in the emission of neutrons. TAE’s pB11 fuel cycle is aneutronic. The only byproducts are energy and helium “ash,” which Binderbauer describes as “not gravitationally bound and very boring as far as its chemistry; it just leaves the atmosphere.”

“In order to react material and create a plasma, you need to have very high energetic states so that these particles slam together hard enough for the nuclear force to take over; otherwise they’re electrostatically repelled,” Binderbauer says. “Typically, temperatures are vast. The plasmas we make in our experiments are on the order of 10 to 15 million degrees. For a reactor to be commercially viable, they’d need to be about 100 million degrees.”

He compares his company’s efforts to the space race of a few decades ago. “We’re trying to create a system with no temperature on the outside and solar temperatures on the inside. This takes incredible advances in engineering, materials, magnets and particle accelerators, as well as countless subsystems,” Binderbauer says. “We’re even working on developing advanced solar collectors that will enable us to convert energy to electricity directly once we’ve solved the fusion part of the puzzle.

“There’s a very different mindset to how we’re pursuing this, and this is where Norman Rostoker deserves the most credit. That’s what I like to call the holistic approach to fusion. And it’s really important that we get this right. The future of the planet is at stake.”