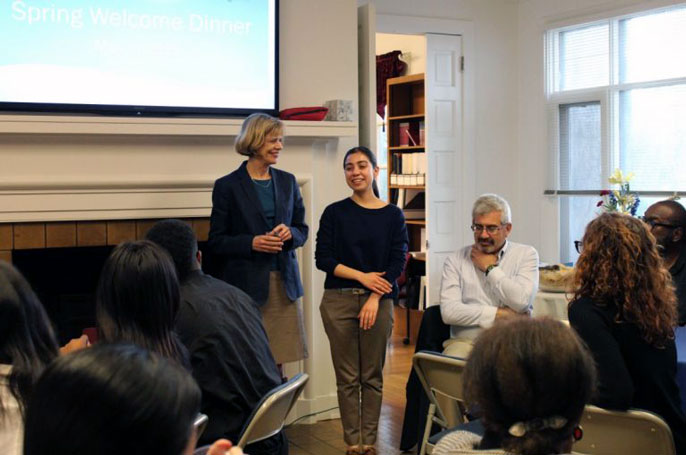 In a few short weeks, the University of California, Riverside will graduate its first cohort of students awarded the Mellon Mays Undergraduate Fellowship (MMUF). UC Riverside was awarded a $500,000 grant in 2014 by The Andrew W. Mellon Foundation to support the MMUF program on campus. The purpose of MMUF is to help diversify college and university faculty by mentoring and preparing undergraduate students for graduate school and academic positions.

“UC Riverside’s participation in the MMUF program is a testament to the strength of our student body as a whole,” said Georgia Warnke, program coordinator for MMUF at UC Riverside, and the director of Center for Ideas and Society. “We are especially proud of our graduating fellows, however. As individuals, they are extraordinarily accomplished; as our first cohort they have collectively established a legacy of great success for the fellows who follow them.”

The three students graduating this year are Jazmine Exford, Maria Liliana Ramirez, and Cynthia Romero. A fourth student, Ariana Elizalde, may finish her undergraduate work over the summer and will then take a gap year before applying to graduate school.

Exford will be graduating with a double major in linguistics and Spanish. She applied to the MMUF program after being encourage by Geoff Cohen, the director of the CHASS First Year Learning Communities.

“He sent me an email with the flyer and said that he thought I would be a perfect for it. I knew I met the requirements but I was apprehensive about applying because the application process was quite intensive and I thought it would be too competitive,” Exford said.

Though she was unsure about her plans after graduation, Exford was lured by MMUF’s goal to diversify faculty within higher education. The opportunity to get involved in research also interested her.

“Mellon Mays made me become serious about becoming a professor or an academic because they showed me the process and how to get to that position. A path I would have likely ignored, or would have otherwise known very little about.”

Exford said she was ecstatic when she found out of her acceptance into the program. She credits the program for making her feel welcome, for giving her the resources and tools she needed to get involved in research — how to start a project, how to get institutional and outside funding, and how to give conference presentations.

Her senior thesis looked at language contact (between two languages) and bilingualism in San Juan, Puerto Rico. She worked alongside Covadonga Lamar Prieto, a professor in the Hispanic Studies Department at UC Riverside. Exford traveled to Puerto Rico to gather data for her thesis, and presented her research at three conferences.

Upon graduation, Exford plans on going to graduate school. She has been accepted to the masters/doctorate linguistics program at UC Santa Barbara.

“When I found out that I had been accepted into the MMUF program I was really excited and happy — it was a good surprise.”

Ramirez will graduate with a degree in anthropology, and a minor in Spanish. She applied for the MMUF program as a transfer student, knowing she wanted to pursue a Ph.D. and ultimately become a professor.

“When I got accepted into MMUF, I was beyond excited and grateful. UC Riverside became my top school to transfer to. With MMUF, I really saw how UC Riverside could support my long-term career and academic goals of becoming a professor,” Ramirez said.

Her undergraduate research project called “Embodied Identities: The Experience of Coming Out as UndocuQueer,” was inspired by her own personal experience of being undocumented and queer. In the project, she examined the experience of what she called “double coming-out;” coming out as queer, and as an undocumented immigrant, which she explained creates a distinct experience from other undocumented students identifying as straight.

Along with looking at the process of coming out as queer and as undocumented, she also looked at the rejection of the term “UndocuQueer” as an identity.

Upon graduation, Ramirez will begin graduate school at UC Irvine. She plans on getting her Ph.D. in anthropology, and expanding her undergraduate research project into her dissertation.

Romero is graduating with a double major in Chicano Studies and Spanish. She applied for the MMUF program after her Spanish professor recommended she do so.

Romero’s research project looks into the sense of belonging among undocumented Latino students at UC Riverside, and investigates their sense of community on campus.

You can learn more about Romero’s journey by reading a commencement story about her.

Elizalde is majoring in public policy and minoring in English. She decided to apply to the MMUF program because of her interest in attending graduate school, and her curiosity about research.

“I remember vaguely hearing about research throughout the campus, and I had this curiosity about it,” she said.

At the time of the application, Elizade was taking a course taught by professor Fred Moten, called “Introduction to American Literary Tradition.”

“I found his teaching style and thinking to be really interesting — I actually enjoyed going to class. So, I was kind of really inspired by him!”

She then found out she was accepted as a fellow to the MMUF program. Moten’s course influenced Elizalde’s research project as she gained insight into the relationship between law and literature. Her research was a textual analysis on the topics of literary studies, public policy, eugenics, and the fictive, and how these topics relate to one another.

The MMUF program at UC Riverside is administered by the Center for Ideas and Society, and the humanities research center for CHASS. The program provides support to fellows in a research program, close mentoring on the research project with a UC Riverside faculty member, preparation for the GRE exam, structured programming to facilitate the transition to graduate school, and a $10,000 repayment of undergraduate loans to the fellows who matriculate into a Ph.D. program in a Mellon-approved discipline within three years of graduating from UC Riverside.

Established in 1988 by William G. Bowen, the then-president of the foundation, and Mellon program associate Henry Drewry, the MMUF program began with an initial cohort of eight member institutions. Since then, the program has grown to include 48 member schools. As of 2017, over 5000 students have been selected as fellows, more than 700 of whom have earned the Ph.D. and over 100 of whom are now tenured faculty members. The great majority of those who have completed the Ph.D. hold or have held an appointment in the academy.