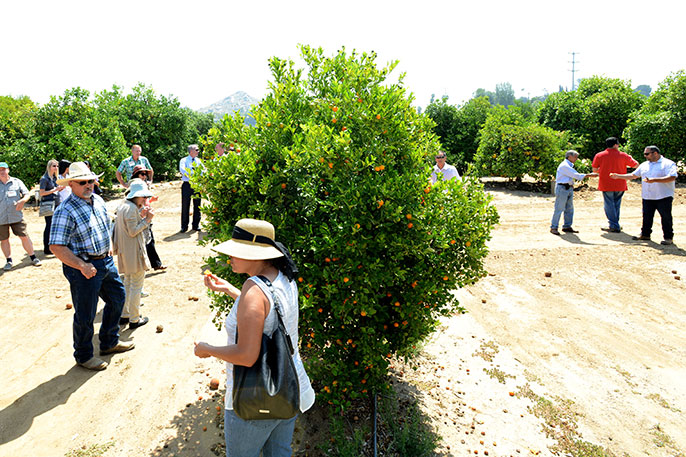 UC Riverside and the California Citrus Research Foundation launched an effort Monday, June 6, that will result in construction of a new facility to be used by researchers to fight a disease devastating the citrus industry.

The research partnership aims to protect California’s $3.3 billion citrus industry from Huanglongbing, also known as citrus greening disease. Huanglongbing is a bacterial plant disease fatal to citrus trees. The disease has devastated citrus trees in Asia, South America and Florida. More recently it has been found in Texas and California.

The partnership will result in the construction of a biosafety-level 3 plant facility in Riverside, about two miles north of UC Riverside.

The biosafety-level 3 plant facility will allow researchers, including many from UC Riverside who are experts on citrus pests, diseases and breeding, to conduct work with plant pathogens that previously couldn’t be done in Southern California. (There is only one other such facility in California – at UC Davis.)

The building, which will be located at the southeast corner of Marlborough and Rustin avenues, will be built and owned by the California Citrus Research Foundation, which is funded by citrus growers.

The partnership was launched June 6 with an event called “Save R’ Citrus” at the UC Riverside Citrus Variety Collection. The event, attended by about 100 people, included tasting fruit from the collection and a tour of the collection.

Several university, government and citrus industry leaders spoke at the event, which was emceed by Michael Pazzani, UC Riverside’s vice chancellor for research and economic development. Pazzani said conversations with UC Riverside citrus researchers led to the idea for this building.

“I’m proud to say that there is a plan in place so there are no longer any barriers to do the research and testing we’d like to do on citrus diseases,” Pazzani said.

“Now, unfortunately, 100 years later, we have a different kind of natural threat. It’s not weather in this case but an insect, Wilcox said. “And again the university, the federal government and private partners have come together and said ‘We can address this.’”

Congressman Ken Calvert of Corona called the building of the containment facility a long-term investment that will help the fight against citrus greening and other agricultural pests.

“There is going to be another insect down the road,” Calvert said. “This isn’t the last one. The world is a small place. So, we need these containment facilities to fight these future onslaughts.”

Congressman Mark Takano of Riverside spoke about his grandfather farming citrus in the Coachella Valley and echoed Calvert’s comments about the containment facility.

“We’ve got to do our utmost to staunch this disease,” Takano said.