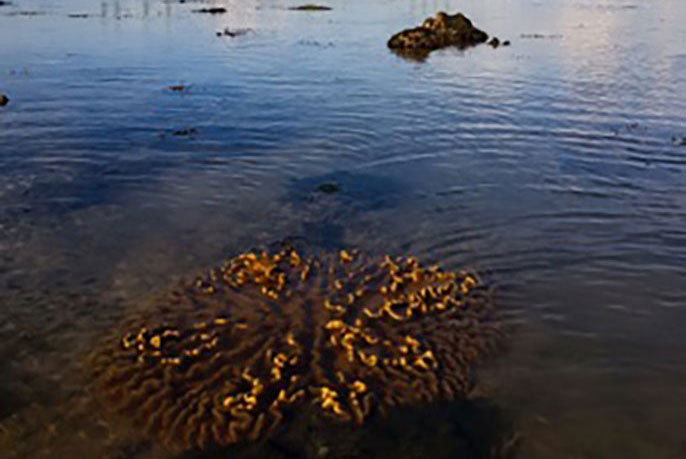 Situated in one of the busiest shipping lanes in the world, the corals surviving on the submerged Cyrene Reef in Singapore are often described as rainforests of the sea. The new SEACoast center will support research into pressing environmental challenges, marked by the unrelenting force of human impact on the planet, said Anthropology Professor Anna Tsing.

Special places deserve special care, which is precisely what a new UC Santa Cruz collaborative will bring to Southeast Asia.

Home to some of the most diverse and vibrant ecological zones in the world, Southeast Asia is threatened by a daunting array of environmental, economic, cultural, and political forces. Forests are being transformed into shrimp farms, coastal cities like Jakarta are sinking into the mud, and islands are disappearing as the region undergoes tremendous change.

Funded by a $1 million grant from the Henry Luce Foundation, the new Center for Southeast Asian Coastal Interactions (SEACoast) at UC Santa Cruz will bring together scholars from the social sciences, humanities, and natural sciences to address the region's challenges. Led by Anna Tsing and Megan Thomas, professor of anthropology and associate professor of politics, respectively, SEACoast aims to cultivate what they call "slow science," nurture the next generation of scholars, strengthen work in Southeast Asia at UC Santa Cruz, and energize the field of Southeast Asian studies.

"Our Center will bring Southeast Asian studies into the pressing environmental questions of this era, marked by the unrelenting force of human impact on the planet,” said Tsing, a former Guggenheim Fellow who is widely recognized for her pioneering, interdisciplinary work. "SEACoast will renew area studies by integrating social and natural scientists and transforming the type of questions that are explored, as well as the way they are investigated."

Driven by sweeping social and environmental change, the crises emerging in Southeast Asia reflect problems that are unfolding around the world. The scope and urgency of these problems demand a new approach, which is why Tsing and Thomas are embracing "slow science."

"SEACoast will be unique in the world," said Tsing.

Allocated over five years, the grant was funded as part of the foundation's Luce Initiative on Southeast Asia, which encourages innovation in Southeast Asian studies, including disciplinary collaboration, and partnerships with individuals and institutions outside academia.

"Southeast Asia has always been a region of incredible biological diversity, linguistic and cultural diversity, and intense exchanges through trade and migration," said Thomas. "Environmental change in Southeast Asia is particularly pressing, and it allows a window into processes that are happening in the rest of the world."

"Slow science" can address the disciplinary divide that has historically separated natural scientists from their counterparts in the social sciences and humanities, as well as the pace of scientific inquiry. Tackling the enormous impacts humans have had on climate and the environment requires overcoming this divide and allowing more time for reflective conversations, said Tsing.

In Southeast Asia — a region that encompasses Brunei, Cambodia, Timor-Leste, Indonesia, Laos, Malaysia, Myanmar, the Philippines, Singapore, Thailand, and Vietnam — human activities such as mining, logging, dam construction, groundwater extraction, salt production, fishing, trade, and coastal development are propelling change. Many of these activities are having devastating, often unintended, effects, including flooding; the spread of invasive species; loss of forests, swamps, and wetlands; sediment flows that suffocate coral reefs; and the buildup of urban trash that infiltrates waterways, decimates marine life, impoverishes fishing populations, and drives migration to cities. At the same time, social and political revolutions, religion, and governance are powerful levers that exert significant effects, as well.

"The human and natural sciences have worked across an intellectual rift that has caused all sorts of problems on both sides," said Tsing. "This is a wake-up call."

By working across history, anthropology, biology, and ecology, SEACoast will become a model of how to address urgent regional issues. A unique focus on coastal "interactions" will emphasize the interplay of humans and ecology, with an inclusive scope broad enough to include commodity chains, governance, interspecies dynamics, and more. As one example, Tsing noted the importance of vernacular local knowledge in setting new agendas for biological inquiry. She is working with ornithologist Kristof Zyskowski, collections manager at Yale University's Peabody Museum of Natural History, to understand how tropical birds respond to various modes and histories of human disturbance in Indonesia. Tsing is incorporating local knowledge about the history and habits of birds into her work, which encompasses studying the relationship of local and international natural histories. To delve into such questions requires collaborations across the human and natural sciences.

The concept of "slow science" resets expectations to value deliberation and the careful study of human and nonhuman actors and history, rather than a rush to pursue questions that will yield quick results. It also leaves room for what Tsing calls the "serendipitous developments" of fieldwork.

For example, Tsing works with Joe Klein, a graduate student in anthropology at UC Santa Cruz, as well as biologists Peter Funch, an associate professor at Aarhus University in Denmark, and Stine Vestbo, a graduate student at Aarhus, to study the trade in live corals in Sulawesi. Their work has documented marine sponges traveling in the porous coral substrate, creating potential pathways for species invasions.

Another project, a study of harmful algal blooms in the Johor Straits, undertaken by Zahirah Suhaimi, a UC Santa Cruz graduate student in anthropology, examines how environmental changes such as coastal development, climate change, and harmful algal blooms are impacting human and nonhuman communities. Tsing is also working with Gillian Bogart, a graduate student in anthropology, whose research investigates ecologies of coastal salt production in Timor and their entanglements with state capitalist ventures and local relations.

"This is exactly the approach we need to take to address the complexity of the problems we're facing in the world today," said Katharyne Mitchell, dean of the Division of Social Sciences, which will be the institutional home of the new center. "We need to take the time to allow scholars trained in diverse disciplines to accommodate each other's thinking. We need the flexibility to respond to each other as we learn together."

UC Santa Cruz is widely recognized for its pioneering, interdisciplinary programs and for making paradigm-shifting research contributions in anthropology, astrophysics, genomics, and other fields. Following in the footsteps of the Center for Cultural Studies and the Science and Justice Research Center, Tsing and Thomas imagine that SEACoast will be another small hub of innovation that will generate outsized impacts.

"It is very exciting to be part of this timely opportunity to bring collaborative research and teaching to bear on the world's most pressing ecological challenges," said Acting Humanities Dean Karen Bassi, noting that faculty from the Arts Division and Physical and Biological Sciences will participate, as well. "SEACoast will provide resources for faculty, students, and visiting scholars to study the complex relationship between ecological, ethical, and political developments in Southeast Asia and beyond."

The Luce grant will directly fund team-conducted fieldwork in Southeast Asia. The new center will nurture the next generation of Southeast Asian researchers by supporting graduate students and postdoctoral scholars, while building collaborations with institutions in Denmark, Japan, Singapore, Indonesia, and elsewhere.

SEACoast enjoys widespread campus support: It will be housed in the Institute for Social Transformation; the Humanities Division has agreed to create a faculty position for a scholar of Southeast Asian environmental history; and the Office of Research called the proposal "extraordinarily well-aligned with our campus's strengths, plans, and focuses moving forward."

Quentin Williams, vice provost and dean of graduate studies, applauded SEACoast's emphasis on supporting the next generation of scholars. "This new center will be an incubator for new ideas, and graduate students and postdoctoral researchers will help bring them to life," he said. "Early-career scholars are the future of Southeast Asian studies, and SEACoast, building on assistance from the Luce Foundation, will position them for great success."