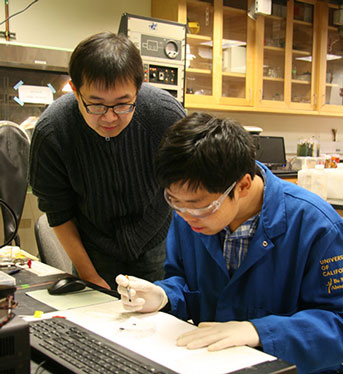 Using a 3D-printing process called direct-ink writing and a graphene-oxide composite ink, the team was able to print micro-architected electrodes and build supercapacitors with excellent performance characteristics. The results were published online January 20 in the journal Nano Letters and will be featured on the cover of the March issue of the journal.

LLNL engineer Cheng Zhu and UCSC graduate student Tianyu Liu are lead authors of the paper. "This breaks through the limitations of what 2D manufacturing can do," Zhu said. "We can fabricate a large range of 3D architectures. In a phone, for instance, you would only need to leave a small area for energy storage. The geometry can be very complex."

Supercapacitors also can charge incredibly fast, Zhu said, in theory requiring just a few minutes or seconds to reach full capacity. In the future, the researchers believe newly designed 3D-printed supercapacitors will be used to create unique electronics that are currently difficult or even impossible to make using other synthetic methods, including fully customized smartphones and paper-based or foldable devices, while at the same time achieving unprecedented levels of performance.

According to Li, several key breakthroughs made these novel devices possible, starting with the development of a printable graphene-based ink. Modification of the 3D printing scheme to be compatible with aerogel processing made it possible to maintain the important mechanical and electrical properties of single graphene sheets in the 3D-printed structures. Finally, the use of 3D printing to intelligently engineer periodic macropores into the graphene electrode significantly enhances mass transport, allowing the device to support much faster charge/discharge rates without degrading its capacity.

"This work provides an example of how 3D-printed materials such as graphene aerogels can significantly expand the design space for fabricating high-performance and fully integrable energy storage devices optimized for a broad range of applications," Li said.

"Graphene is a really incredible material because it is essentially a single atomic layer that can be created from graphite. Because of its structure and crystalline arrangement, it has really phenomenal capabilities," said LLNL materials engineer Eric Duoss.

Over the next year, the researchers intend to expand the technology by developing new 3D designs, using different inks, and improving the performance of existing materials.