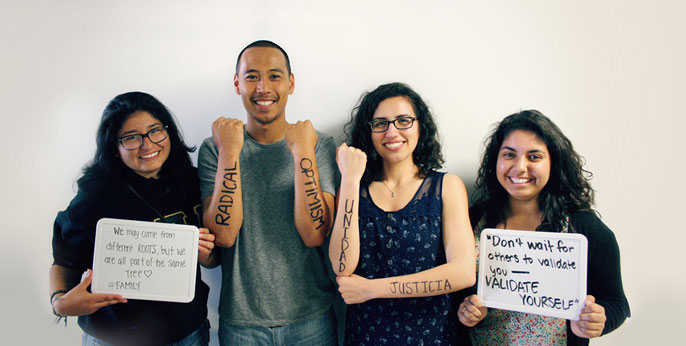 Meng L. So, second from left, director of the UC Berkeley Undocumented Student Program, is working with his team to meet exceptional demand for services on campus.

On September 5, 2017, President Trump made a controversial decision to end the Deferred Action for Childhood Arrivals (DACA) program, a federal policy that has allowed hundreds of thousands of undocumented young people who were brought to the United States as children to legally live, work and study in this country.

In the wake of that decision, the University of California took immediate action to advocate for affected students — a fight that continues as the university prepares to defend DACA before the Supreme Court.

UC’s DACA students are studying to be the next generation of doctors, teachers, engineers and other professionals that contribute to our society in important ways. Ending the policy would cause many students to lose the financial support that makes it possible for them to study. There is much at stake, including our students’ research, intellectual and workforce contributions and their future economic opportunities. At the heart of this fight, however, is the decision’s human cost to families and communities, including our own.

Fighting for DACA — from the beginning

Despite President’s Trump initial indecision on whether he would end DACA, UC anticipated this move early on. In 2016, UC President Janet Napolitano joined the chancellor of California State University and then chancellor-designate of California Community Colleges in sending a letter to then-President-Elect Trump urging continuation of DACA.

The same day President Trump declared an end to DACA, UC leaders issued a statement denouncing this decision and calling upon Congress to protect affected students. Just three days later, UC became the first university in the country to file suit in federal court against the Trump administration, arguing that it wrongly and unconstitutionally violated the rights of the university and its students by ending DACA without offering any valid reason.

Five lower courts have reviewed and upheld UC’s position. On June 28, 2019, the U.S. Supreme Court agreed to review the case. UC filed its brief on September 27 and oral arguments will begin November 12.

As the case to defend DACA has progressed through the courts, UC’s advocacy on behalf of undocumented students has soldiered on. In addition to many public statements over the past three years, in October 2017, President Napolitano joined with all 10 UC chancellors to issue a letter to the California congressional delegation, urging bipartisan legislation to protect Dreamers in California and throughout the nation.

A powerful voice on the issue is the University of California Advocacy Network, affectionately dubbed UCAN. UCAN is comprised of committed people within the UC community: staff, faculty, students, alumni and friends of the university. Through targeted action campaigns, advocates lend their voices to shape state and federal policies promoting the university’s mission of education, research and public service.

How effective is UCAN? Very.

In just under three months, UC advocates emailed and called their representatives more than 3,100 times urging their support for H.R. 6, the American Dream and Promise Act. On June 4, 2019, the House of Representatives passed it, sending the bill to the Senate.

If signed into law, this legislation would allow recipients of Temporary Protected Status and Deferred Enforced Departure protections — including thousands who currently attend or have graduated from the University of California — to earn lawful permanent residence and eventually U.S. citizenship.

It's easy to get involved. Join UCAN — become a UC advocate!

UC staff are here for DACA recipients, day in and out

The decision to rescind DACA “was a moment of intense grief for our students and a painful reminder of America’s unfulfilled promise to our community,” Meng So, director of UC Berkeley’s Undocumented Student Program, told UC Newsroom in 2017. The program held a closed-door meeting to help students process the news. Their drop-in counseling services spiked 350 percent that week.

“It wasn’t just about losing a piece of paper. It was about losing the small taste of safety, opportunity and freedom that came with it,” said So. “Even in the face of this loss, our students still overcome to find togetherness, love and resilience with each other.” Read about campus reactions and support for students in the wake of the DACA decision.

And check out all of UC’s systemwide resources for undocumented students. Led and facilitated by staff at each location, services include: