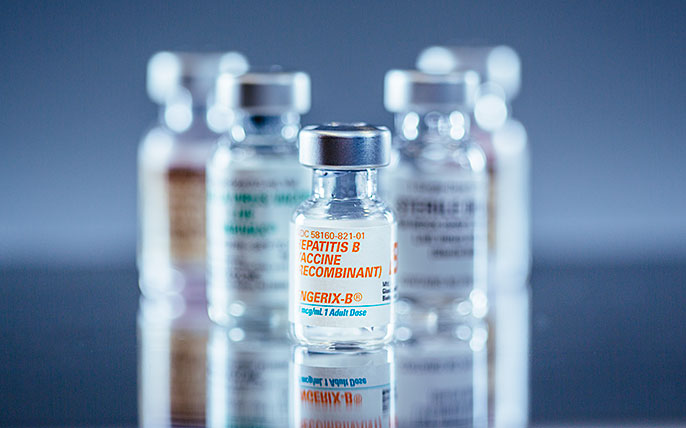 UC San Francisco and UC Berkeley researchers played key roles in the development and commercialization of the hepatitis B vaccine.

It's easy to forget that, not so many years ago, people fell ill — and sometimes died — from once-common, easily transmitted diseases.

Viruses like chicken pox and measles would course through classrooms and workplaces. People had little recourse against influenza pandemics, such as those in 1968 and 1957, and the horrific Spanish flu of 1918. Vaccines against these diseases have saved countless lives and spared even more from severe illness and complications.

The University of California has played a significant role in the development of the safe, effective vaccines that we now take for granted. Research conducted now will result in future vaccines. Some examples:

Hepatitis B: In 1981, UC San Francisco's William Rutter cloned the gene for the outer coat of the hepatitis B virus, making possible the development of the first-ever vaccine using recombinant DNA techniques. Approved by the Food and Drug Administration in 1986, the vaccine — developed by Chiron, which was co-founded by UC Berkeley biochemist Edward Penhoet — has had significant impact on world health, including the incidence of liver cancer.

Influenza: UC Berkeley biochemist Wendell M. Stanley and others — among them, Jonas Salk — were early researchers working on an influenza vaccine in the 1940s.

Polio: Salk, of course, is more widely known for his development of a vaccine against the dread disease polio. The entire nation rejoiced in 1955 when the vaccine — after three years of testing — was declared safe and effective. UC San Diego recently became the official repository for Salk's personal papers.

Human cytomegalovirus (CMV): An experimental vaccine against CMV infection, which endangers the developing fetus, organ transplant recipients, patients with HIV and others who have a weakened immune system, has proved safe and more effective than previous vaccines developed to prevent infection by the ubiquitous virus. The first-of-its-kind approach to preventing human CMV infection, developed by a team of scientists at UC Davis and the University of Alabama, Birmingham, induced broader immunological protection in an animal model.