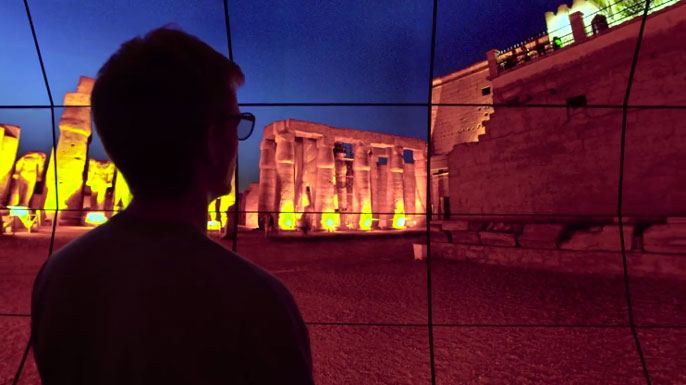 Imagine being able to explore the newly discovered hidden chambers in the Great Pyramid of Giza or microstructures within the human brain, to work on big-data projects with CERN or participate with performers in Australia — all without ever leaving Merced.

It’s now possible to have those experiences and many others — and share them with people around the world — through the new Wide-Area Visualization Environment system at UC Merced.

Student and faculty researchers across campus can use the WAVE, a half-pipe-shaped cluster of 4K, 3-D monitors that immerse users in virtual reality. The 20-screen system is part of the Pacific Research Platform, which connects the 10 UC campuses with other research universities to create a high-speed network for collaborative science and scholarship.

“This has been dubbed the ‘Year of Virtual Reality’ by the media and the gaming industry; there is so much potential for students to learn through this immersive environment,” said professor Nicola Lercari, a founding member of the university’s World Heritage program and one of the WAVE’s earliest adopters.

“The WAVE can reduce the gap that still exists between the processes of data collection and interpretation, and the dissemination of that data to researchers and the public.”

The WAVE is the latest in a 20-year design evolution. It’s built on the best in consumer electronics, including Organic Light-Emitting Diode (OLED) 4K TVs and custom-built PCs with gamer graphics cards to deliver 10-20 times the resolution of an IMAX theater. Like the best digital cinema, the WAVE also features an immersive Dolby Atmos audio system that fills the room with spatialized audio.

Even though the WAVE is constructed from best-in-class PCs with the latest graphics cards and top-of-the-line TVs, it was relatively inexpensive to build because the components are mass-produced for the consumer electronics market. The system is modular, upgradeable and runs with largely open-source software. The significant savings of this approach also allowed the system designers to add content creation tools that will support a diverse user base in creating meaningful content for the WAVE.

“The UC Merced WAVE puts the campus at the forefront of this technology,” said Jeffrey Weekley, director of Cyberinfrastructure and Research Computing in the Office of Information Technology. “It adds a significant capability to support cutting-edge research. We hope to draw wide participation across disciplines not historically served by this kind of infrastructure.”

Although the WAVE is managed by the School of Social Sciences, Humanities and Arts, it does not belong exclusively to any school. Housed in the new Classroom and Office Building 2, the WAVE is a multischool, interdisciplinary research facility supported by the deans of all three schools, as well as the Office of Research and Economic Development, OIT and the UC Merced Library.

A core group of faculty members have also been involved in making the WAVE idea a reality, including Lercari, fellow professors Marcelo Kallmann and Michael Spivey, and Professor Mark Aldenderfer, the former dean of SSHA.

“Some of our work in cognitive science will focus on human-computer interaction and human-robot interaction, in collaboration with faculty in computer science,” Spivey said. “Testing out how people cooperate with different types of artificial agents in VR can be a safe and less expensive way to conduct interactive virtual experiments.

“Using the WAVE, you can make instant changes to the virtual environment during the 30 milliseconds that someone takes to make an eye movement. You could change a virtual agent’s shirt from blue to brown, during an eye movement, and the observer usually will not notice. This kind of research helps us develop better theories of what the visual perception parts of your brain are really doing.”

Tapping into a network of knowledge

Systems like the WAVE are typically housed in engineering or computer science spaces, Weekley said, while the Merced WAVE is more closely tied to the humanities. And while UC Merced’s WAVE isn’t the first of its kind, it uses the latest technology and is the first to use 4K monitors on this scale.

[The WAVE is an immersive visual experience that transports researchers and visitors to locations around the world.]

The system lets researchers and students explore new collaboration techniques as they connect with people around the state, the country and the world to discover knowledge.

“A single telephone does you no good, but a telephone in everyone’s pocket changes the world,” Weekley said. “Because the WAVE is one of many on the global research and education network, it has far more value than it would if it were unique. It is unprecedented in its scale and resolution, but there are many more like it to come, and we will be connected to many of them.”

Like much of UC Merced, the WAVE will also provide opportunities for community engagement, Lercari said. The campus has already started a collaboration with the Mariposa County Unified School District through which high school students will engage in citizen science initiatives, including documenting places of historical significance and studying the preservation of natural places, such as Yosemite National Park.

“The goal is to spark interest and train young students from the San Joaquin Valley and Sierra Foothills in cutting-edge research,” Lercari said.

The WAVE provides the campus with another way to enhance undergraduate and graduate programs, as well, with new infrastructure.

But it’s the potential that has researchers really excited.

“People will be able to explore spatial environments virtually and across time, regardless of scale,” Lercari said. “Remote archaeological sites, virtual reconstructions of ancient cities, the cosmos, the human brain, 3-D proteins, bacteria and molecules — the possibilities are virtually limitless.”