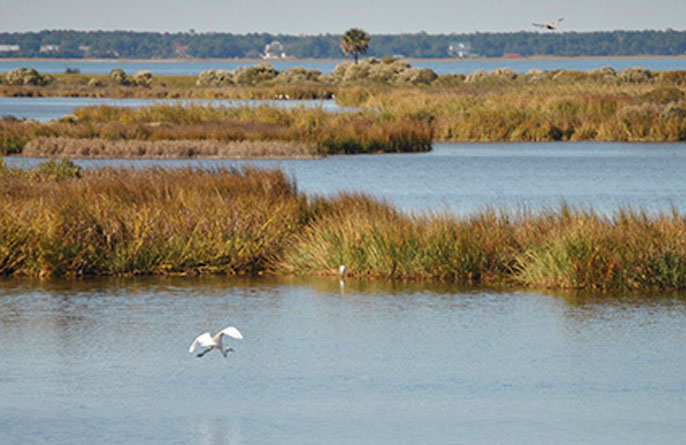 As communities across the Southeast United States and the Caribbean count the cost of flood and wind damage during Hurricane Matthew, a pioneering study led by scientists at UC Santa Cruz, Coastal Wetlands and Flood Damage Reduction, has quantified how much protection natural coastal habitats provide during hurricanes.

Using the latest modeling techniques, scientists from the conservation, engineering, and insurance sectors studied the impact of Hurricane Sandy in the Northeast United States in 2012, when New York and New Jersey were badly hit by storm surges. The study found more than $625 million in property damages were prevented during this natural catastrophe by coastal wetlands along the Northeast coast.

Without wetlands, the damage bill would be much higher for Sandy and other predicted hurricanes. Where wetlands remain, the average damage reduction from Sandy was greater than 10 percent. Experts within the study team expect that the analyses of the effects of Hurricane Matthew earlier this month will demonstrate similar protections.

“We were able to put a dollar value on the coastal protection benefits from wetlands, using Hurricane Sandy as a test case. The results are relevant for many other areas such as San Francisco Bay, where we have lost 85 percent of historic wetlands and face grave risks from future flooding,” said project lead Michael Beck, an adjunct professor of ocean sciences at UC Santa Cruz and lead marine scientist for the Nature Conservancy. “Our work shows how we can align risk reduction and conservation interests to identify where to do marsh restoration and how to fund it.”

Wetlands are critical not just for catastrophic hurricanes, but also for all the likely storms in the region.

“It was unexpected to find just how effective wetlands can be at reducing property damages from catastrophic storms and hurricanes. It was also critical that we were able to combine state-of-art engineering models with coastal ecology and economic analysis,” said Siddharth Narayan, a postdoctoral fellow at UC Santa Cruz and lead author of the study. “Our coastal habitats are natural defenses, and in this study, we show that their risk reduction services add up to hundreds of millions of dollars along the U.S. East Coast.”

“Our models traditionally focus on man-made coastal defense structures, or on other grey architecture solutions, like elevating properties above sea level,” said Paul Wilson, VP of model development at RMS and expert in hurricane and storm surge. “This study is pioneering because it applies cutting-edge modeling science to natural defenses, and it allows us to put a financial value on the role wetlands play in protecting our coastal communities against storm surges.”

By quantifying the economic value of natural defenses, they can be more effectively included in risk models and coastal management. In fact, the protection they provide is often incorporated in industry risk models, but these benefits are often pooled with many other factors and then not clearly recognized by risk modelers, (re)insurers, brokers, clients, and others. Wetlands can be straightforwardly included in results provided by the risk and engineering sectors and thus more easily considered in coastal development and habitat restoration decisions.

There were also additional critical findings for coastal policy makers. For example, some townships with few wetlands within their borders benefit greatly from wetland preservation in neighboring townships; the value of wetlands to properties accumulates as you move upstream away from the coast.

The magnitude of the benefits was surprising given how many coastal wetlands already have been lost throughout the region. For example, wetlands did not reduce as much damage in New York in part because of their extensive loss in past decades. At the same time, even relatively small, thin bands of wetlands serve as an effective first line of defense, and they can be restored to build coastal resilience.

Incentives to conserve and restore

“This work shows the unlikely yet powerful benefits of collaboration between insurers, engineers, and conservationists in identifying solutions to reduce risks to people, property, and nature,” Beck said. “The work highlights where we can find innovative financing opportunities and incentives for conserving and restoring coastal wetlands, which plainly put is good for the environment and good for business.”

“Lloyd’s Tercentenary Research Foundation aims to fund cutting-edge scientific research that contributes positively to society; this principle is embodied in the ongoing project led by the University of California at Santa Cruz,” said Jean-Bernard Crozet, trustee of Lloyd’s Tercentenary Research Foundation and head of underwriting modelling at MS Amlin. “Coastal ecosystems such as coral reefs, mangroves, and salt marshes play a fundamental role in reducing the risk of storm surge. The LTRF believes that improved quantification of these benefits will, in turn, lead to better management and conservation of these natural ecosystems, contributing not only to risk reduction along our coasts but to our planet’s sustainability in the long run.”

The study was led by UC Santa Cruz; The Nature Conservancy and the Wildlife Conservation Society in association with Risk Management Solutions and Guy Carpenter & Company. The project was supported by the Lloyd’s Tercentenary Research Foundation with additional support from the Science for Nature and People Partnership (SNAPP).

Lloyd's Tercentenary Research Foundation was established to mark the tercentenary of Lloyd’s in 1988. Since then, it has funded over 100 years of academic research in the fields of engineering, science, medicine, business and the environment through the provision of post-doctoral fellowships and business scholarships. Today, through its partnership with the Insurance Intellectual Capital Initiative, UK Research Councils, and specifically commissioned academic institutions, Lloyd's Tercentenary Research Foundation continues its work of funding top flight academic research by supporting new programs of research on risk related issues. Learn more at www.lloyds.com/ltrf.