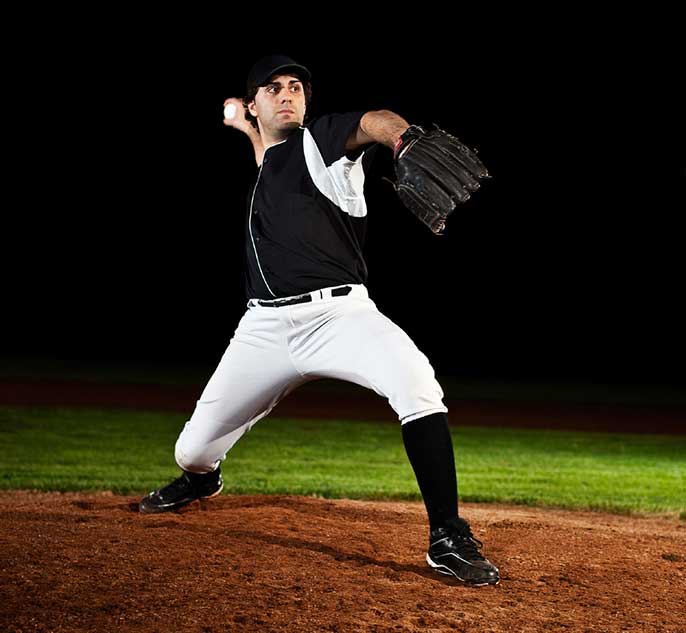 Even the most highly practiced expert movements — such as those by a major league pitcher — are actually being continually relearned on a trial-by-trial basis.

Storied baseball pitchers are renowned for consistently throwing strike after strike, even under the pressure of the World Series.

But even the seasoned pros are actually continually relearning their machine-like throwing movements, according to a new study by UC San Francisco neuroscientist Philip Sabes, Ph.D., about how the brain integrates motor learning.

Sabes studies sensory and motor learning in macaque monkeys, with a focus on reaching behavior. One goal of this work is designing better arm prostheses for amputees or victims of paralysis that will allow the user to “feel” the prosthetic limb’s position in space.

In the course of that work, he and colleagues noticed that even the most highly trained monkeys exhibit significant variability in their performance; even when completing well-practiced reaching movements, the monkeys’ movements showed drift. Not only that, but the researchers found this motor variability correlated with similar drifts in the average firing rate of motor neurons.

Contrary to notions of highly stable “motor memories,” the team thinks that this correlation suggests that even the most highly practiced expert movements are actually being continually relearned on a trial-by-trial basis.

To illustrate the relevance of these primate studies to human behavior, the group exploited Major League Baseball’s obsessive data collection, obtaining detailed quantitative information on each four-seam fastball thrown during the 2011 baseball season. They even found measurable drifts in fast pitches thrown by the notoriously consistent Los Angeles Dodgers’ Clayton Kershaw in a game against the New York Mets on May 8, 2011.

For Sabes, a diehard San Francisco Giants fan whose lab is just blocks from AT&T Park, settling on the Giants’ arch-nemesis Kershaw as an example of expert motor behavior, was a concession to first author and postdoctoral fellow Kris S. Chaisanguanthum, Ph.D., a lifelong Dodgers follower.

And it can’t be denied that the precision of Kershaw’s delivery is the stuff of legend — earlier this year, ESPN’s website ran a headline reading “Clayton Kershaw's Consistency Is Mind-Numbing.”

In the Sept. 3, 2014 issue of the Journal of Neuroscience, however, Sabes, Chaisanguanthum and former UCSF graduate student Helen H. Shen, Ph.D., show that, however it might appear from the stands, even two-time Cy Young Award-winner Kershaw’s release of his fabled four-seamer is subject to precisely the sort of behavioral drift they’ve observed in the lab.

The Giants and Kansas City Royals could learn a few things from those monkeys as they face off this week.