What’s in your drinking water? 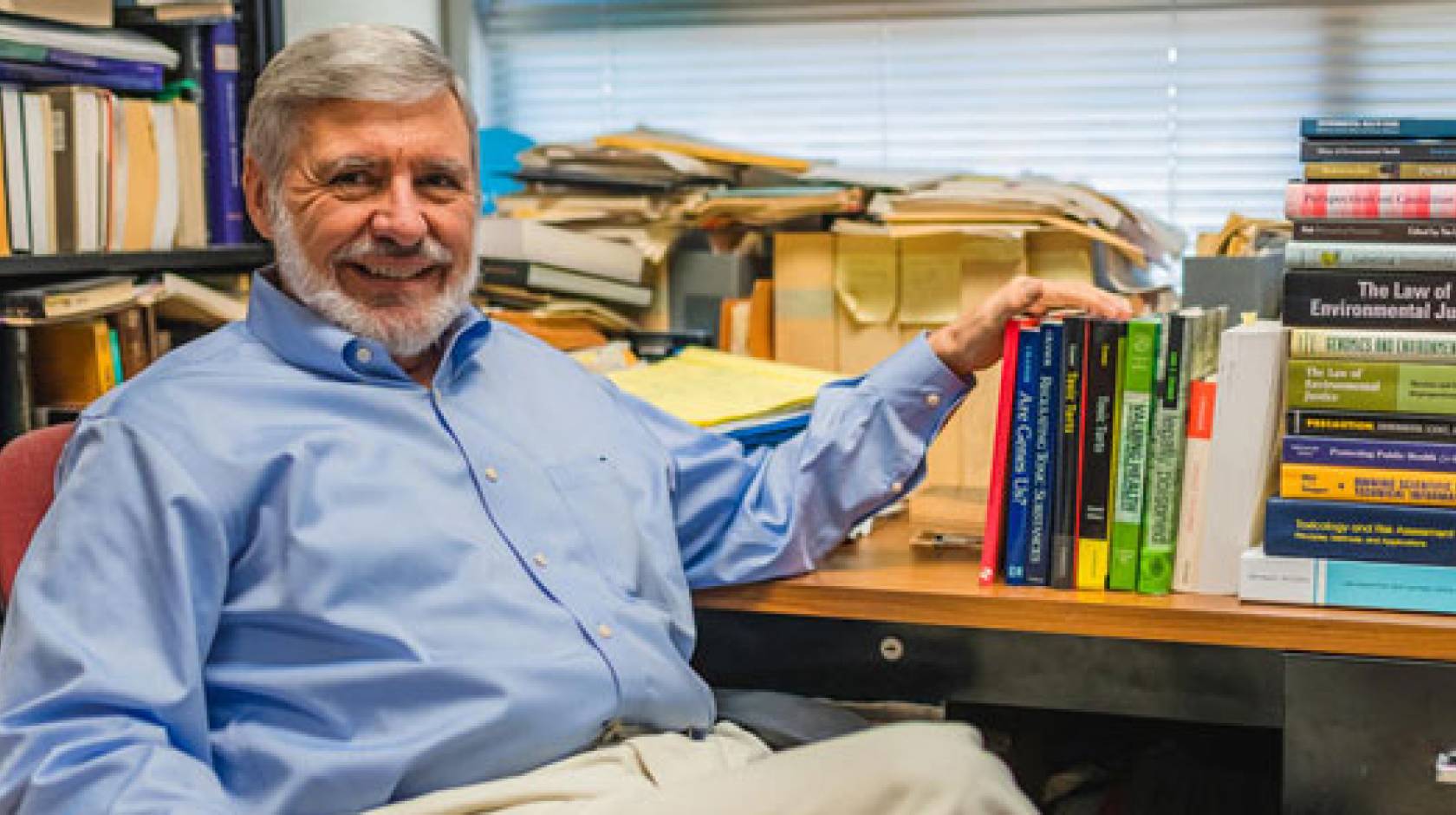 What if every day you drank water contaminated with a toxic, manmade chemical that had been linked to cancer? What if the company that produced the chemical knew it caused cancer yet did nothing to stop you from consuming it?

Produced in labs for 80 years, synthetic chemicals known as per- and polyfluoroalkyl substances, or PFAS, were key to the creation of household products like Teflon pans and Scotchgard.

PFAS’ carbon-fluorine bonds are some of the strongest in organic chemistry. They’re so stable, in fact, that PFAS have been widely referred to as “forever chemicals” because of their indestructability, said Carl Cranor, a distinguished professor of philosophy at the University of California, Riverside.

“These chemicals are going to be part of our environment long after people are dead,” Cranor said. “They’re incredibly stable, and they’re are all over the world now; the only place they might not exist is high in the Himalayas in Nepal.”

Cranor, whose research focuses on legal and moral philosophy, has spent decades studying PFAS and other environmental contaminants that threaten public health.

He said one type of PFAS called perfluorooctanoic acid, or PFOA — used to make nonstick cookware, among other consumer products — can now be found in the blood samples of up to 99 percent of Americans.

PFOA, also called C8, has been linked to various illnesses and strains of cancer — including testicular, kidney, ovarian, and prostate — since the 1990s, mainly in lawsuits filed against Teflon’s manufacturer, DuPont.

But according to Cranor, internal memos reveal that DuPont had been well aware of C8’s toxicity to lab animals far earlier, since at least 1961.

Nearly 60 years later, the U.S. Environmental Protection Agency has announced its intention to “address” PFAS by evaluating them for the first time.

The plan’s announcement is long overdue, Cranor said. Still, he remains skeptical of how much of an impact the federal agency will be able to make under what he described as a “very industry-friendly” presidential administration.

“Will the EPA do something? Probably. But will they do enough? Probably not,” he said. “I don’t think they’ll do anything significant, aside from maybe listing PFAS as a water contaminant under the Safe Drinking Water Act, and as something that shouldn’t be dumped into rivers and navigable waters under the Clean Water Act. Given how widespread PFAS are, how well will we be protected?”

He discussed the importance of both in his 2017 book, “Tragic Failures: How and Why We Are Harmed by Toxic Chemicals.” In particular, Cranor zeroed in on the legal framework’s shortcomings when it comes to protecting citizens’ health.

Unlike prescription drugs and pesticides, chemicals found in everyday household products are governed under “postmarket laws,” meaning they aren’t routinely required to be tested for their safety and effectiveness before they hit the market, he said.

Under the 1976 Toxic Substances Control Act, or TSCA, companies were required only to submit “proposals” to the EPA about their intent to commercialize a new chemical, along with some bare-bones data about the substance. In response, the EPA could request more information, including any available toxicity-testing data — but only by means of burdensome, time-consuming procedures.

As a result, as many as 84,000 untested chemical substances have flooded the market, including 62,000 existing substances that were “grandfathered in” as safe upon TSCA’s passage, Cranor said.

“We are largely ignorant about these creations, their properties, and the risks they pose,” he wrote in “Tragic Failures.” “Knowing this, do you still have confidence in the safety of such products in your home or your workplace?”

A piece of legislation signed into law in 2016 by former President Barack Obama could change things, Cranor said.

The Frank R. Lautenberg Chemical Safety for the 21st Century Act, which amended the less protective TSCA, authorized a somewhat more “consistent source of funding” for the EPA to carry out a number of responsibilities.

“The Lautenberg Act could be a good law; it has solid language, and it applies to a broad range of chemicals,” Cranor said. “The problem is that it’s being implemented by industry apologists — people who aren’t completely trustworthy. We live in a very industry-friendly world, and that’s been deliberately brought about by lobbying on behalf of companies.”

The same companies have also shaped tort law at the Supreme Court level, making it difficult for victims of chemical poisoning to be awarded damages in civil lawsuits in lower courts, too.

Courts especially tend to favor human epidemiological studies as evidence of a toxicant’s harm, Cranor said, although these kinds of studies can be difficult for plaintiffs to find or produce. They can also be they can be “insensitive” when it comes to detecting diseases.

In that case, a refrigeration technician who had developed rare acute promyelocytic leukemia brought action against 22 chemical companies whose products contained benzene, a known carcinogen.

Serving as an expert witness, Cranor introduced a six-step methodology for inferring that exposure to carcinogenic benzene had, in fact, caused the technician’s cancer. His work has since impacted how scientific testimony is addressed and interpreted in court cases.

“When we think about toxic substances, there are two institutions we need to keep in mind: one is the science, and the other is the law,” Cranor said. “We shouldn’t just say, ‘Well, we want the very best science before we do anything legally.’ Because if we insist on the ‘very best science,’ nothing will ever happen. We have to figure out the proper amount of science we need for the task and use that.”

In Cranor’s ideal world, the EPA would work within the Lautenberg Act to devise strategies for implementing stronger premarket testing and removing existing toxicants from the market — and the environment — more quickly.

The federal government would also expand its investment in the agency by funding better, impartial science that prioritizes public health, and hiring more people to do it.

Finally, in implementing tort law, judges would permit a wider range of studies that scientists use to infer toxic effects in people, instead of insisting on multiple kinds of “ideal science.”

Who benefits, and who is protected?

DuPont, in response to mounting pressure, removed PFOA/C8 from Teflon production in 2013, a small step akin to the first of a marathon.

But in recent years, products such as the popular hair-smoothing treatment Brazilian Blowout, which contained large concentrations of formaldehyde, and the weed-killer Roundup have been linked to cancer, raising the question of who shoulders the burden of protecting the public from dangerous chemicals.

Even long after products are removed from the market, many of their harmful effects linger, like PFAS in water. What’s more, those who bear the brunt of such effects are often too young to advocate for themselves.

“Children grow up in semi-toxic environments before even being born,” Cranor said. Whether in utero or after birth, “developing children tend to be exposed to greater concentrations of chemical creations than the mother and adults more generally,” he wrote.

Science and regulation move slowly, Cranor said. But the larger goal of his research — putting the onus on public health laws to protect people by holding companies accountable — is worth the effort if it leads to better safeguards in the form of well-administered laws.

It’s also worth imparting to students who, like a young Cranor was when he first read Rachel Carson’s “Silent Spring,” might be on the precipice of careers in environmental justice.

“We’re going to have to change all sorts of behaviors to truly make it a better world,” Cranor said. “Luckily, these topics have gotten the attention of the students I teach. They really seem fired up, and I think part of the reason is that most of them had no idea how bad the laws are at protecting us.”

Cranor, who is also a faculty member in the UC Riverside Environmental Toxicology Graduate Program, has published more than 80 papers and several books and monographs, among them “Toxic Torts: Science, Law and the Possibility of Justice” (first edition 2006, second edition 2016) and “Legally Poisoned: How the Law Puts Us at Risk From Toxicants (2011).

He has served on the Scientific Guidance Panel of the California Environmental Contaminant Biomonitoring Program and state science advisory panels for Proposition 65, which requires the state to publish an annual list of chemicals known to cause cancer, birth defects, or other reproductive health problems; the Electric and Magnetic Fields Program; and nanotechnology. He earned a law degree from Yale University and a doctorate in philosophy from UCLA.