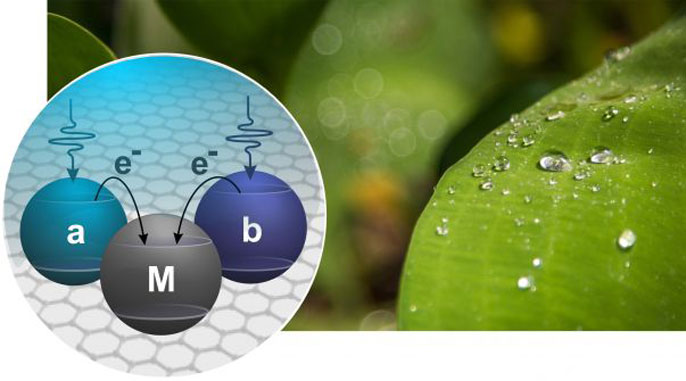 A University of California, Riverside assistant professor has combined photosynthesis and physics to make a key discovery that could help make solar cells more efficient. The findings were recently published in the journal Nano Letters.

Nathan Gabor is focused on experimental condensed matter physics, and uses light to probe the fundamental laws of quantum mechanics. But, he got interested in photosynthesis when a question popped into his head in 2010: Why are plants green? He soon discovered that no one really knows.

During the past six years, he sought to help change that by combining his background in physics with a deep dive into biology.

He set out to re-think solar energy conversion by asking the question: can we make materials for solar cells that more efficiently absorb the fluctuating amount of energy from the sun. Plants have evolved to do this, but current affordable solar cells – which are at best 20 percent efficient – do not control these sudden changes in solar power, Gabor said. That results in a lot of wasted energy and helps prevent wide-scale adoption of solar cells as an energy source.

Gabor, and several other UC Riverside physicists, addressed the problem by designing a new type of quantum heat engine photocell, which helps manipulate the flow of energy in solar cells. The design incorporates a heat engine photocell that absorbs photons from the sun and converts the photon energy into electricity.

Surprisingly, the researchers found that the quantum heat engine photocell could regulate solar power conversion without requiring active feedback or adaptive control mechanisms. In conventional photovoltaic technology, which is used on rooftops and solar farms today, fluctuations in solar power must be suppressed by voltage converters and feedback controllers, which dramatically reduce the overall efficiency.

The goal of the UC Riverside teams was to design the simplest photocell that matches the amount of solar power from the sun as close as possible to the average power demand and to suppress energy fluctuations to avoid the accumulation of excess energy.

The basic operating principle is that one channel absorbs at a wavelength for which the average input power is high, while the other absorbs at low power. The photocell switches between high and low power to convert varying levels of solar power into a steady-state output.

The findings led the researchers to propose that natural regulation of energy they found in the quantum heat engine photocell may play a critical role in the photosynthesis in plants, perhaps explaining the predominance of green plants on Earth.

Other researchers have recently found that several molecular structures in plants, including chlorophyll a and b molecules, could be critical in preventing the accumulation of excess energy in plants, which could kill them. The UC Riverside researchers found that the molecular structure of the quantum heat engine photocell they studied is very similar to the structure of photosynthetic molecules that incorporate pairs of chlorophyll.

The paper is called “Natural Regulation of Energy Flow in a Green Quantum Photocell.” In addition to Gabor, the authors are: Trevor Arp, a graduate student working with Gabor; Yafis Barlas, a research scientist in the SHINES center and Vivek Aji, an associate professor in the UC Riverside Department of Physics and Astronomy.