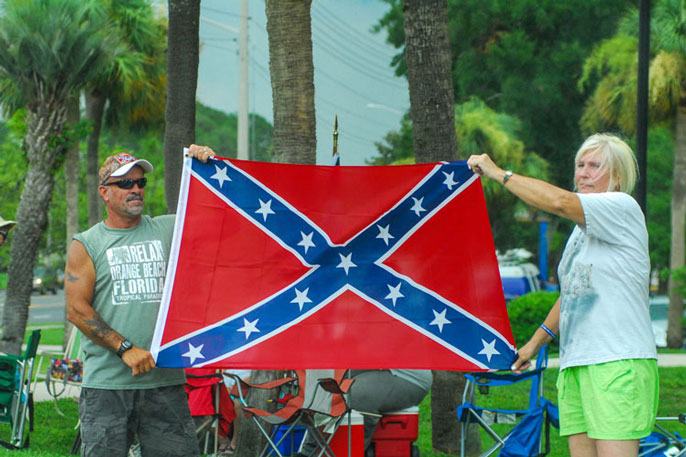 The Confederate flag has been denounced as an overt symbol of racism.

Living in unabashedly racist communities can shorten the lives of both blacks and whites, according to new research from UC Berkeley.

Researchers compared the racial biases of nearly 1.4 million people nationwide to death rates in more than 1,700 U.S. counties. Their findings suggest that blacks and, to a lesser degree, whites who reside in overtly racist communities are more prone to dying from heart disease and other circulatory diseases.

“This suggests that living in a racially hostile environment might be detrimental to both the group targeted by this bias, in this case blacks, as well as the group that harbors the bias, in this case whites,” said study lead author Jordan Leitner, a postdoctoral fellow in psychology at UC Berkeley. The findings were just published in the online edition of the journal Psychological Science.

The study controlled for age, education, income, population, rural versus urban and other factors that might influence health.

While previous studies have connected perceived discrimination to negative health outcomes, this is the first to take large data sets, which were not previously available, and measure relationships between whites’ racial bias and the health of whites and blacks in their community, Leitner said.

To conduct the study, researchers compared death rates from circulatory diseases from 2003 to 2013 – collected by the Centers for Disease Control – with racial bias data that came from Project Implicit, a website that provides tests to measure explicit and implicit biases related to gender, religion and race.

To measure overt racial attitudes, participants rated on a scale of zero to 10 the warmth of their feelings about whites and blacks. Overt racism was defined as greater warmth towards whites, as compared to blacks.

Although the data depend on self-reported feelings about race, the sheer volume of responses (nearly 1.4 million) offers insight into the racial attitudes of a community, Leitner said.

Analysis of the data showed that counties with higher rates of heart-disease-related deaths were consistently on a par with those in which people reported higher levels of racial bias, and that blacks were most negatively impacted by this trend.

“We found that whites’ explicit bias was more powerful than their implicit bias at predicting negative health outcomes for blacks,” Leitner said.

As for the link between whites’ explicit racial bias and death rates, Leitner said, a recent study from the University of Pennsylvania suggests that whites in highly biased communities are less likely to trust and bond with others in their community, and this lack of social connectedness may have negative health implications.

Enduring power of overt racism

Circulatory disorders, which include heart attacks, angina and coronary heart disease, are the leading cause of death in the United States. While the study cannot make a causal link between racism and circulatory disease deaths, researchers speculate that the environmental stress of racial hostility combined with discrimination in health care may create or exacerbate circulatory problems for blacks.

“One possibility is that blacks in racially hostile communities experience lower quality health care, or may avoid seeking health care, even if it is available, because they feel like they won’t be treated fairly,” Leitner said.

Overall, Leitner said, the study reinforces the enduring power of overt racism, discussion of which has been eclipsed in recent years by a growing awareness of unconscious biases.

“It’s become more normative over the past 40 years to be egalitarian, and being labeled a racist is stigmatizing in many communities,” Leitner said.

But while explicit racism has decreased on a national scale, he said, “it’s still a powerful predictor of how whites and blacks fare health-wise in a community.”

Next, Leitner plans to look into long-term trends to see if racial biases are actually causing health disparities. He also intends to explore how blacks’ racial attitudes affect health outcomes.

In addition to Leitner, co-authors of the study are Ozlem Ayduk and Rodolfo Mendoza-Denton of UC Berkeley and Eric Hehman of Ryerson University in Toronto, Canada.

View an interactive map of the data here.