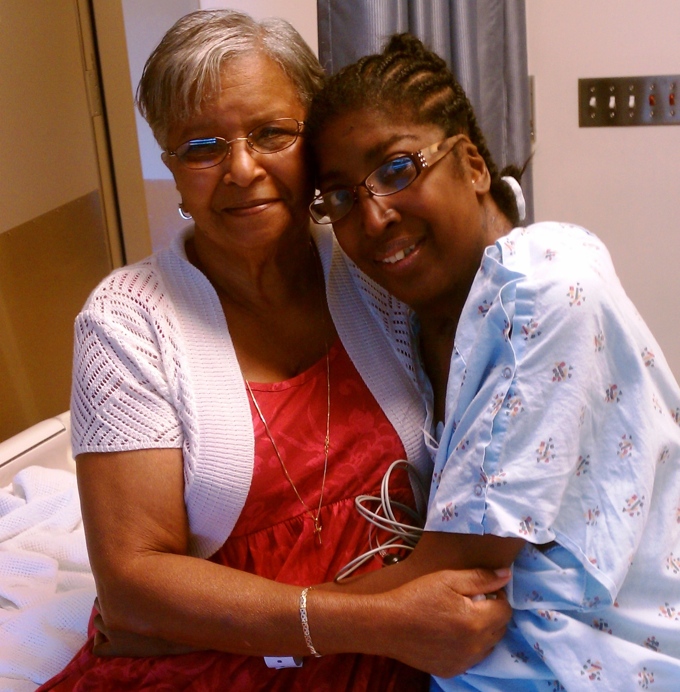 At age 32, Brandie Osborne has beaten the odds.

The young woman from Compton, Calif., has dealt with health issues her entire life and has faced death more than once. But now, with a new donated heart and kidney, transplanted at Ronald Reagan UCLA Medical Center, she has been given a second chance to live and is ready to take on the world.

Osborne was born with a fairly common genetic condition known as Noonan syndrome, which is often associated with heart and lung problems. In Osborne's case, she developed hypertrophic cardiomyopathy, a thickening of the heart muscle, and pulmonary hypertension, which caused high blood pressure in her lungs. In 2009, her condition worsened and she was placed on the waiting list for a heart–lung transplant at a hospital in Northern California that was covered by her insurance.

While waiting, she suffered heart and lung failure and required a breathing tube. Then her kidneys failed and she needed dialysis. With so many medical complications, she was deemed an unacceptable candidate for transplantation surgery and was transferred back to UCLA to pursue end-of-life care.

Osborne spent the next six months in the intensive care unit at UCLA and slowly improved, ultimately learning to walk and function again. In March 2010, she was well enough to go home with the aid of several machines that helped her breathe and eat. Despite her chronic heart and kidney failure, her spirit endured and her health continued to improve with the love and support of family and friends.

Over the next two years, Osborne's extremely complicated medical issues kept her from being considered for a transplant again. However, her lung doctor, Dr. David Ross, a professor of pulmonology and medical director of the UCLA Lung Transplant Program, and her cardiologist, Dr. Daniel Cruz, a clinical instructor of cardiology at UCLA, championed a new idea: If they used medications to treat Osborne's pulmonary hypertension after a potential heart transplant, she would not require a lung transplant at the same time. In other words, the lung problems could be reversed with a healthy new heart and medications. Pursuing this strategy, they hoped, could get Osborne back on the transplant list for a heart, and possibly a kidney.

"Although it would be unchartered territory, after much intense discussion among the team and after explaining the high risks to Brandie and her family, it was decided to put her on the combined heart and kidney transplant list in June 2012," Ross said.

Thirty-six days later, Brandie learned that an organ donor had been found. She said her reaction was, "No way! Oh my God! Oh my God," followed by tears, then panic, then more tears and excitement.

Going into the first phase of the surgery — the heart transplant — Osborne had been told it was an extremely high-risk operation. One of the scariest parts, she said, was that she'd been told by the doctors that because of her anatomy, the surgeon might not be able to immediately close her chest wall after the new heart was transplanted. There was a likelihood she would have to remain in intensive care with her chest open and possibly use an oxygenation machine to support the new heart.

However, Dr. Richard Shemin, UCLA's chief of cardiothoracic surgery, successfully performed the delicate operation and managed to close Osborne's chest without complications. Less than 24 hours later, she returned to the UCLA operating room for the next phase, a kidney transplant from the same donor, which was performed by Dr. H. Albin Gritsch, an associate professor of urology.

When she woke up after the two high-risk surgeries, the first thing she said to her mother was, "I'm alive!"

Osborne is now going home from the hospital in just her "skin" — no tubes, no machines, no dialysis. She has just one small pump that administers her lung medications.

"Thanks to the family who made the decision to donate their loved one's organs, I am getting a second chance at life," she said. "I cannot thank my donor and my UCLA team enough for saving my life!"

And her list of things to do is quite long: swim, ride a bike, go for walks, play with her Shitzu puppy, travel to Hawaii, eat lots of pasta, and learn how to bake cupcakes and someday open a bakery.