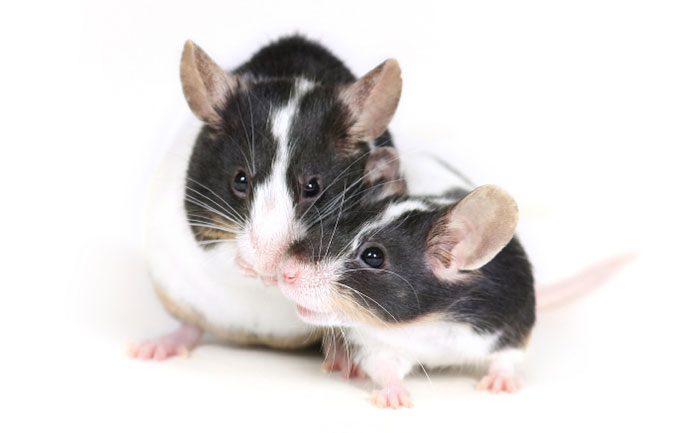 Research conducted by UCSF's Saul Villeda and collaborators at Stanford University identified evidence of cognitive improvements and other forms of rejuvenation in old mice when they were connected to the circulatory system of young ones.

Young blood really does rejuvenate the brain, at least in mice, raising hopes that molecules in the blood may be identified to do the same for humans, according to a study stemming from the ongoing research of a young UC San Francisco scientist, Saul Villeda, Ph.D.

The research, on which Villeda collaborated with scientists at Stanford University, identified anatomical, molecular and biochemical evidence of cognitive improvements and other forms of rejuvenation in old mice when they were connected to the circulatory system of young ones. Results were published online in Nature Medicine on May 4.

Anatomically, it was clear that these mice formed more structural and functional connections between neurons, or nerve cells, while they also turned on more genes associated with the formation of new nerve connections.

Furthermore, the researchers found that a protein called Creb became more activated in the brain region known as the hippocampus, and that this increased activity was associated with the anatomical and cognitive improvements the team observed.

“We know that something in the young blood leads to Creb activation, and the Creb is a master regulator of gene activity in the brain that is associated with the formation of new connections between neurons underlying learning and memory,” Villeda said, adding that Creb activation is known to decrease in both normal human aging and in Alzheimer’s disease.

In the behavioral experiments, old mice were injected with either old or young blood. Cognitively, old mice with young blood coursing through their veins performed better. When immersed in water, they were better able to recall the location of a submerged platform and climb onto it. In a separate, fear-conditioning exercise, they responded more quickly to stimuli normally perceived as threatening, a behavior important for survival.

Identifying and getting rid of aging factors in old blood, or supplying youthful factors from young blood, might both be worthwhile strategies to combat aging, Villeda says. But don’t try injecting yourself with saved samples of your young blood at home just yet.

“I definitely think this is something that could translate to humans, but we still lack some key pieces of knowledge,” Villeda said. “We don’t know what might be the appropriate regimen or dosage. Most importantly, while young blood seems to improve muscle, liver, heart and brain, we haven’t extensively studied potentially detrimental long-term effects.”

Villeda, now an assistant professor of anatomy at UCSF, began the experiments as a Stanford graduate student and then as a postdoctoral fellow working in the lab of Tony Wyss-Coray, Ph.D., professor of neurology in the Stanford University School of Medicine and the senior scientist for the Nature Medicine study.

Villeda then expanded his research program dedicated to these anti-aging studies as a Sandler Faculty Fellow at UCSF in September 2012, with his own lab team at the Eli and Edythe Broad Center of Regeneration Medicine and Stem Cell Research.

Villeda concedes that the results of the Nature Medicine study sound like something out of science fiction, but each key experiment was done independently by both the UCSF and Stanford lab groups, with similar results.

“There are certain aspects of aging that can be reversible — that to me was a little unexpected,” Villeda said.

Studies by other research groups published simultaneously with the Nature Medicine study confirm earlier findings by Villeda and Wyss-Coray that young blood can drive growth-stimulating stem-cell activity in the mouse brain, and have identified a possible regenerative role in the brain for a molecule called GDF-11. In similar previous experiments, researchers found that GDF-11 reverses an age-associated heart condition called cardiac hypertrophy.

Villeda wonders, “Are there multiple, youth-promoting factors? Does each tissue have its own set of factors that need to be identified? This whole field is just opening up.”

Villeda’s lab work was funded by the UCSF Program for Breakthrough Biomedical Research, by the UCSF Clinical and Translational Science Institute, and by an National Institutes of Health Director’s Independence Award. Several students and research fellows also received fellowships to work on the study. Sources of additional funds for the study included the U.S. Department of Veteran Affairs, the California Institute for Regenerative Medicine and the National Institute of Aging.