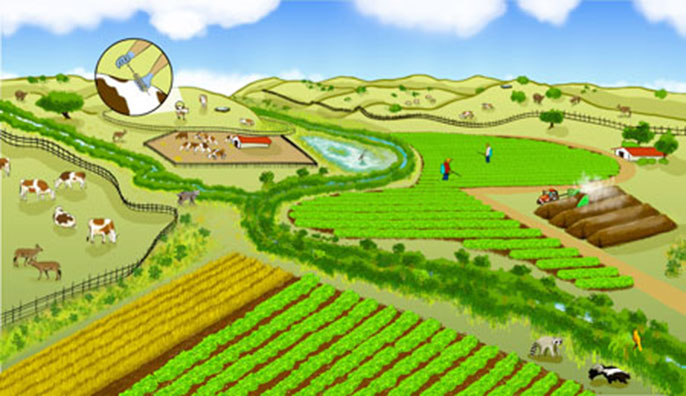 A farming landscape can be co-managed for both produce safety and nature conservation. Promising practices include buffering farm fields with non-crop vegetation to filter pathogens from runoff and planting low-risk crops between leafy green vegetables and grazeable lands.

The effort to improve food safety by clearing wild vegetation surrounding crops is not helping, and in some cases may even backfire, according to a new study led by researchers at UC Berkeley.

The findings, reported today (Aug. 10) in the journal Proceedings of the National Academy of Sciences, call into question the effectiveness of removing non-crop vegetation as a way to reduce field contamination of fresh produce by disease-causing pathogens. This practice led to extensive loss of habitat in a region that is globally important for food production and natural resources.

The practice was implemented largely in response to a 2006 outbreak of pathogenic E. coli in packaged spinach that killed three people and sickened hundreds of others in the United States. That outbreak was traced to a farm in California’s Central Coast, a region that supplies more than 70 percent of the country’s salad vegetables. The disease-causing E. coli strain was found throughout the farm environment —  including in the feces of nearby cattle and wild pigs — but the cause of the outbreak has never been officially determined.

“Wildlife took much of the blame for that outbreak, even though rates of E. coli in wildlife are generally very low,” said study lead author Daniel Karp, a NatureNet postdoctoral research fellow in UC Berkeley’s Department of Environmental Science, Policy and Management and The Nature Conservancy. “Now, growers are pressured by buyers to implement practices meant to discourage wildlife from approaching fields of produce. This includes clearing bushes, plants and trees that might serve as habitat or food sources for wild animals. Our study found that this practice has not led to the reductions in E. coli and Salmonella that people were hoping for.”

Instead, the study authors noted that the presence of diverse habitats bordering food crops can actually provide a number of agricultural benefits.

“There is strong evidence that natural habitats surrounding crop fields encourage wild bee populations and help the production of pollinated food crops,” said study senior author Claire Kremen, a UC Berkeley professor of environmental science, policy and management. “There have also been studies that suggest that a landscape with diverse plant life can filter out agrichemical runoff and even bacteria. Changing this dynamic shouldn’t be taken lightly.”

‘No reason to continue’ habitat removal

The researchers analyzed about 250,000 tests of produce, irrigation waters and rodents conducted by industry and academics from 2007 through 2013. The tests were conducted on samples from 295 farms in the United States, Mexico and Chile, and targeted the presence of pathogenic E. coli, Salmonella and generic strains of E. coli. The researchers combined the test data with a fine-scale land-use map to identify characteristics of the landscape surrounding the agricultural fields.

The researchers found that the removal of riparian or other vegetation did not result in lower detection of pathogens in produce, water or rodents. Overall, the prevalence of pathogenic E. coli in leafy green vegetables had increased since the outbreak, even as growers removed non-crop flora. In fact, the growers who removed the most vegetation experienced the greatest increase in pathogenic E. coli and Salmonella in their vegetables over time.

“Clearing surrounding vegetation is a costly, labor-intensive practice that threatens wildlife habitat,” said Karp. “Since it does not improve food safety, there is no reason to continue this practice.”

The study did find, however, that the likelihood of detecting pathogenic E. coli was greater when fields were within 1.5 kilometers of grazeable land than when they were farther away.

“It is unclear whether it was the cattle or wildlife grazing on those lands that were responsible for the elevated pathogen levels, but there are a number of ways that farming and ranching can co-exist in a diversified system,” said Karp.

After the 2006 E. coli outbreak in spinach, California’s agricultural industry implemented a voluntary certification program called the Leafy Green Products Handler Marketing Agreement. At the federal level, in 2011 President Obama signed the Food Safety Modernization Act, considered one of the most sweeping reforms in farming practices in decades. Both efforts shift the focus to preventing rather than responding to outbreaks.

Notably, neither the federal law nor the state program calls for the removal of wildlife habitat surrounding crops, but private buyers, keen on retaining consumer confidence in their products, may still require growers to take steps that go beyond government regulations.

“The real worry for me is that federal law will be interpreted as the floor rather than the ceiling of what farmers should do,” said Karp. “There is this misguided idea that agricultural fields should be a sanitized, sterilized environment, like a hospital, but nature doesn’t work that way.”

Other co-authors of the study are Sasha Gennet, senior scientist at The Nature Conservancy; Christopher Kilonzo, Melissa Partyka and Edward Atwill at UC Davis; and Nicolas Chaumont at Stanford University.