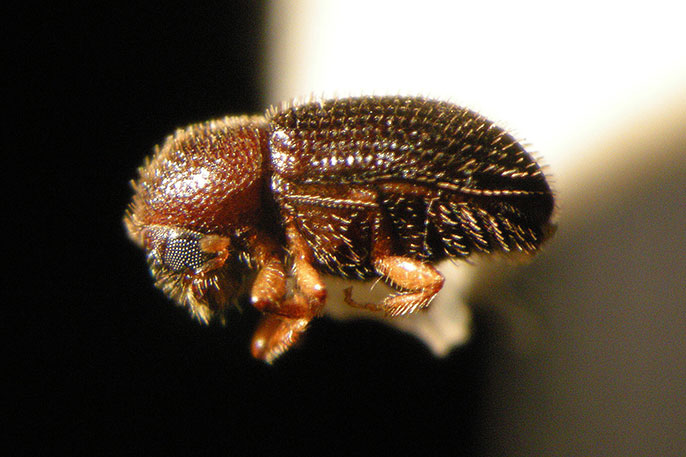 A closeup view of the coffee berry borer.

The coffee berry borer is the most devastating coffee pest in the world. The tiny beetle is found in most regions where coffee is cultivated, and a big outbreak can slash crop yield by 80 percent.

It’s also a caffeine fiend. The insect is the only coffee pest that uses the caffeine-rich bean as its sole source of food and shelter. It bores into the bean and spends most of its life tucked inside, where it’s exposed to what should be an extremely toxic amount of caffeine for its mass: the equivalent of a 150-pound person downing 500 shots of espresso. Caffeine is harmful to most insects and is believed to act as a natural pest repellant. So how does the coffee berry borer thrive in such a hostile environment?

It relies on the bacteria in its gut, according to new research by scientists from the U.S. Department of Energy’s Lawrence Berkeley National Laboratory (Berkeley Lab), the U.S. Department of Agriculture (USDA) and Mexico’s El Colegio de la Frontera Sur (ECOSUR). Their study appears today (July 14) in the journal Nature Communications.

The scientists discovered that coffee berry borers worldwide share 14 bacterial species in their digestive tracts that degrade and detoxify caffeine. They also found the most prevalent of these bacteria has a gene that helps break down caffeine. Their research sheds light on the ecology of the destructive bug and could lead to new ways to fight it.

“Instead of using pesticides, perhaps we could target the coffee berry borer’s gut microbiota. We could develop a way to disrupt the bacteria and make caffeine as toxic to this pest as it is to other insects,” says Javier Ceja-Navarro, a scientist in Berkeley Lab’s Earth Sciences Division and lead author of the paper.

Ceja-Navarro and Eoin Brodie of Berkeley Lab led the effort with the USDA’s Fernando Vega, an expert on the coffee berry borer and one of the study’s corresponding authors. Zhao Hao, Ulas Karaoz, Trent Northen, Stefan Jenkins, and Hsiao Chien-Lim of Berkeley Lab; Francisco Infante of ECOSUR; and Petr Kosina of Mexico’s International Maize and Wheat Improvement Center also contributed.

Scientists have extensively studied the beetle, but very little research has focused on how it subsists solely on coffee berries, and the Berkeley Lab and USDA-led team is the first to explore the role of the bacteria in its gut. The idea isn’t as far-fetched as it may seem. Microbes perform key functions in all ecosystems, from cycling nutrients in the soil to shaping the human immune system from inside our digestive tract.

“Before this research, I worked with atomic force microscopy, where you have to keep your hands steady, so I got good at it,” says Ceja-Navarro. “But I had to cut down on coffee!”

The scientists immersed the gut bacteria in a special medium containing caffeine as the main nutrient, so only the bacteria that degrade caffeine survived. Fourteen bacterial species were isolated, most of which were found in beetles from all seven coffee-producing regions and the laboratory colony. These bacteria appear to subsist on caffeine as their sole source of carbon and nitrogen. One of the bacteria, Pseudomonas fulva, was the most prevalent, according to their DNA-based geographic survey.

The scientists also screened the bacteria for a gene called ndmA that is known to transform caffeine. They found that only P. fulva possessed this gene. Ceja-Navarro surmises the other bacteria help break down caffeine using different genes.

To confirm the role of P. fulva in the degradation of caffeine, the researchers administered an antibiotic to a group of beetles that wiped out their gut microbiota. They then fed these beetles a standardized diet based on coffee beans and then analyzed their feces. The caffeine passed through their digestive tracts intact without a hint of degradation.

The scientists next added P. fulva to the beetles’ diet to restock their guts with the caffeine-degrading bacterium. The feces from these beetles were devoid of caffeine, indicating the detoxification process had been restored.

“After that, we knew gut bacteria were key to the beetle’s survival strategy and its ecology in general,” says Eoin Brodie, the study’s senior author. “This is a clear example of how microorganisms, with their rapid adaptive capabilities, can enable higher organisms to colonize new environments.”

The research was funded by the U.S. Department of Agriculture, the Laboratory Directed Research and Development program at Berkeley Lab, and Mexico’s National Council for Science and Technology.