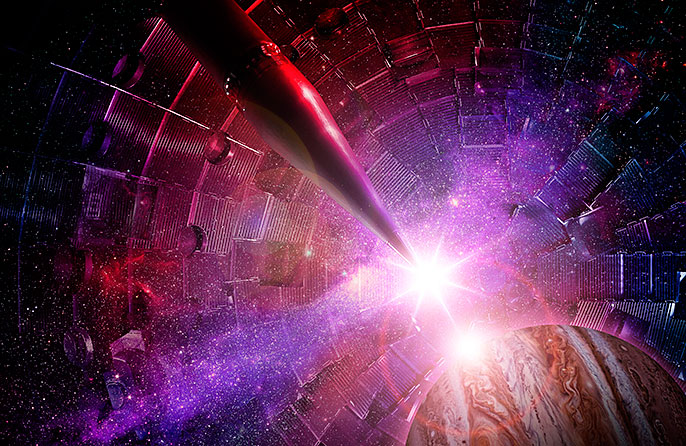 The interior of the target chamber at the National Ignition Facility at Lawrence Livermore National Laboratory. The object entering from the left is the target positioner, on which a millimeter-scale target is mounted. Researchers recently used NIF to study the interior state of giant planets.

Lawrence Livermore scientists for the first time have experimentally re-created the conditions that exist deep inside giant planets, such as Jupiter, Uranus and many of the planets recently discovered outside our solar system.

Researchers can now re-create and accurately measure material properties that control how these planets evolve over time, information essential for understanding how these massive objects form. This study focused on carbon, the fourth most abundant element in the cosmos (after hydrogen, helium and oxygen), which has an important role in many types of planets within and outside our solar system. The research appears in the July 17 edition of the journal, Nature.

Using the largest laser in the world, the National Ignition Facility at Lawrence Livermore National Laboratory, teams from the Laboratory, University of California, Berkeley and Princeton University squeezed samples to 50 million times Earth's atmospheric pressure, which is comparable to the pressures at the center of Jupiter and Saturn. Of the 192 lasers at NIF, the team used 176 with exquisitely shaped energy versus time to produce a pressure wave that compressed the material for a short period of time. The sample — diamond — is vaporized in less than 10 billionths of a second.

Though diamond is the least compressible material known, the researchers were able to compress it to an unprecedented density greater than lead at ambient conditions.

"The experimental techniques developed here provide a new capability to experimentally reproduce pressure-temperature conditions deep in planetary interiors," said Ray Smith, LLNL physicist and lead author of the paper. Such pressures have been reached before, but only with shock waves that also create high temperatures — hundreds of thousands of degrees or more — that are not realistic for planetary interiors. The technical challenge was keeping temperatures low enough to be relevant to planets. The problem is similar to moving a plow slowly enough to push sand forward without building it up in height. This was accomplished by carefully tuning the rate at which the laser intensity changes with time.

The data described in this work are among the first tests for predictions made in the early days of quantum mechanics, more than 80 years ago, which are routinely used to describe matter at the center of planets and stars. While agreement between these new data and theory are good, there are important differences discovered, suggesting potential hidden treasures in the properties of diamond compressed to such extremes. Future experiments on NIF are focused on further unlocking these mysteries.