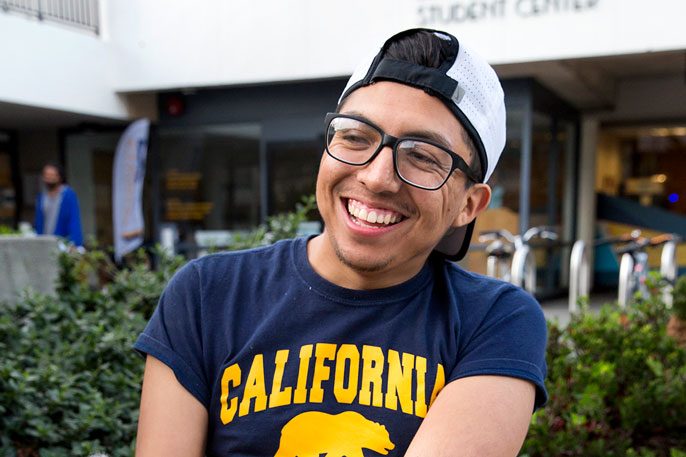 Now safely back at school, Luis Mora, a third-year political science major at UC Berkeley, was detained for nearly three weeks by U.S. Immigration and Customs Enforcement for having an expired visa.

As an 8-year-old, Luis Mora, like a lot of kids, walked home from school every day. He would take the same path home — across a covered bridge, down a flight of stairs and along the road until he got to his home in Quito, Ecuador.

One afternoon, as he crossed the footbridge, a teenager walked up to him, held a gun to the second grader’s chest and demanded his cell phone. (Mora’s parents, who worked long hours, had given their son a phone so they could easily stay in touch with him throughout the day.)

“I saw my whole life — all the memories from past Christmases, from past birthdays,” says Mora. “But then, I saw images of the future and knew I would be okay, that I wouldn’t die that day.” He calmly handed over his phone and the few coins he had in his pocket.

“We’re just humans, like Americans, trying to achieve a better life. We all have dreams.”

Being able to remain calm in a crisis, says Mora, now a third-year political science major at UC Berkeley, is what helped him get through nearly three weeks of detention by U.S. Immigration and Customs Enforcement. He was released Jan. 17 with the help of Berkeley’s Undocumented Student Program and an outpouring of support from campus advocacy groups and top state leaders.

Back on campus, Mora says that despite all of the anti-immigration rhetoric that continues to intensify with the Trump administration and the controversy that has surrounded his detainment and release, he feels stronger and more focused than ever.

“I believe everything happens for a reason,” he says. “My detainment has motivated me in a way to get my message out there — that this is what immigration really looks like. We’re just humans, like Americans, trying to achieve a better life. We all have dreams.”

Mora believes it’s his responsibility to help people understand that immigration isn’t going away — our country was built, and continues to function, because of immigrants.

After Mora was robbed at gunpoint a second time, when he was 10, his mother decided it was time to leave Ecuador. She wanted her only son to be able to grow up and pursue an education without the daily threat of violence. She also had cancer and knew she could get better treatment in the U.S. So she got two six-month visas and they moved to California, first to Los Angeles, then settling in San Diego.

Mora says his mother, a doctor and a missionary, taught him how to express himself in a way that encourages people to listen — not with anger, but with a kind of peaceful strength. It’s something that has inspired him to become an outspoken advocate for the undocumented community at UC Berkeley and across the nation.

Meng So, the director of the Undocumented Student Program, which serves the campus’s nearly 500 undocumented students, describes Mora as “a bottle of optimism and positive energy mixed with Red Bull.”

At 20 years old, Mora has an easy way about him. His gait is unhurried and his smile is wide. He seems undistracted, focused on the moment and conversation he’s having. He seems comfortable with who he is and has the air of a leader, someone who will stay true to himself no matter the hardship.

Undocumented immigrants like Mora, So says, learn from an early age that they have to find a kind of inner resilience to navigate through challenges of being on the outer margins of society. But he adds, in today’s political climate, resilience isn’t enough.

“Our students need other people to step up and to really push for immigration reform that upholds their dignity, their sense of being human and their sense of community,” Says So. “Immigration isn’t just an immigrant issue; it’s a human issue.”

When Mora was released from custody, he was eager to get back to Berkeley. Although he’d missed a couple of days of classes, he jumped back into his studies — he’s taking a full 17 credits — with a renewed sense of purpose.

“I’ve lived through it,” he says. “It’s my goal to help the many future generations of immigrants who are still going to come to this country.”

He’s already begun. He’s donated more than $8,000 in bond payments — part of the $15,000 raised for his release through a social media campaign spearheaded by the campus immigrant rights group, Rising Immigrant Scholars through Education — to other immigrants held in the same detention center that he was.

“We will be unwavering in our fight… and keep moving forward with love over fear.”

And he won’t stop there. He has decided to pursue a career as an immigration judge, with the goal of reforming immigration policy to help undocumented immigrants secure legal status in the U.S.

Meanwhile, Mora awaits a trial before an immigration judge in San Francisco, scheduled for March, and continues to work toward securing legal citizenship by the time he graduates in 2019.

So says he and his team at the Undocumented Student Program will continue to be resolute in their belief and support of students, no matter the cost. Students like Mora, he adds, give him the courage to keep fighting every day

“We will be unwavering in our fight,” he says. “Our work will be harder, scarier and more urgent than ever. I don’t know how we will do it, but we will keep pushing. And keep moving forward with love over fear.”

Although his future is still uncertain, Mora says he’s sure that he’s on the right path, being a voice for so many who have been voiceless for too long.